Today I got a dongle for $80 so I won't have to go to Maccas for wifi anymore. Back at the hostel I made pasta with Roozbeh, Yanik, and William then sorted some things out on the internet and went to the meeting. After a bit of table tennis we went to a pancake house where I got some potatoes in delicous gravy then ate Daniel's leftover pancake.

After the meeting today I went to Big W for some new tyres (tires) then went back for few hours. At 5p we played more table tennis before heading up into the hills for pizza. On the way up we saw smoke over the whole city - possibly from a bush fire. After garlic bread, three pizzas and some lasagna we headed over to Windy Point to watch the sunset over the city. 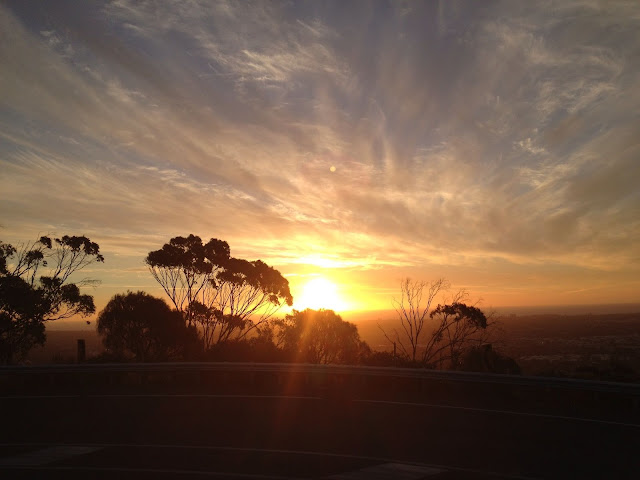 Today I stained some boards for James and he paid me $100. He also helped me fix the front tyre on the bike that I borrowed and invited me to his party next weekend. On the way back to my hostel I noticed a loud sound and followed it until I arrived at the Future Music Festival. 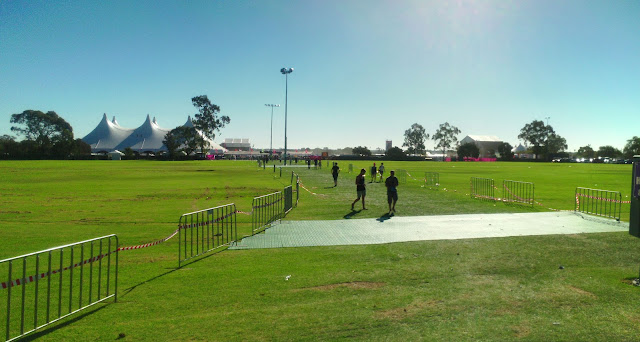 I was disappointed thinking it was WOMAD (world music festival) but later found out it was just a bunch of kids listening to dub step.

All Photos
Posted by Travis at 4:41 AM No comments: Links to this post

Today I popped a balloon for making my first sale. At first I found nothing inside but then I saw a note fall to the floor and picked it up to see my prize. I opened it up looking forward to a $50 gift voucher or maybe the usual six pack of beer only to find a subscription for 200 magazines.. No, actually it was just a zoo subscription... hmm, not the most impressive first balloon pop but I'm sure I'll get another shot at it soon. As we set our goals for the day I put three sales which later proved to be right on. It was a less than desirable start with no sales at 2p but at about 4p I finally made one, then another at about 5:30p and yet another at 5:55p with five minutes left! I had to put the vero call time down because they lost connection and shut down the line, but the sale still counts.


Back at the hostel the guy at the front desk, Brian gave me a few hours on the roster so that I could earn my weekend. He's still not sure how well they'll be able to work around my schedule but at least that's something! Before working my first shift I decided to grab a snack from the kitchen. I looked in the free drawer and it just so happened that somebody had placed some delicious pumpkin spice banana bread in it! Ate a good portion of that then went to fold linen for an hour.

Today I made my first sale in the first half hour and got excited only to find that the next few hours were basically dead. I revisited a couple homes where they seemed really interested but didn't work out. One guy sat down with me when I returned and spent an hour going over the figures even though he wasn't even the account holder and wasn't actually planning on signing up for anything... The other house I returned to was already a client so I checked their bill to make sure they had the best rates and started to leave when the lady decided to reward my efforts with a plate of cookies and some juice to drink. After spending a bit talking with her about traveling and her kids who are spread around the world I headed back out. It was almost time to leave but I managed to squeeze one more sale in before getting picked up.

Today we got new reps and had a race out to the vans for a prize. Ours was positioned to leave first but Craig had the wrong key in the ignition so we lost. For lunch I had a meat pie from the bakery across the street instead of the usual Hungry Jacks burger. On turf I made two sales in two hours then a third one in the last minutes. One guy worked for AGL (big energy company) and said he was getting 25% off his bill.. so I looked at my rate sheet, back at him and said, "I think we can still do better."

Today I packed some cheese sandwiches so I could save on eating out. After lunch I went out aiming for four sales but unfortunately everyone in this particular turf was in a snobby mood and slamming doors. At about 5p I was feeling a bit discouraged but still managed to make two sales. On the way back Danny and I had a couple beers to soften the blow we both took on our attitudes for the day. It was at this point that I realized we were missing a rep. Apparently he had a bit of a situation with a customer and no one can say what happened so it will be interesting to find that out when it finally becomes declassified.

On the ride back today I caught a big full moon in between some buildings. 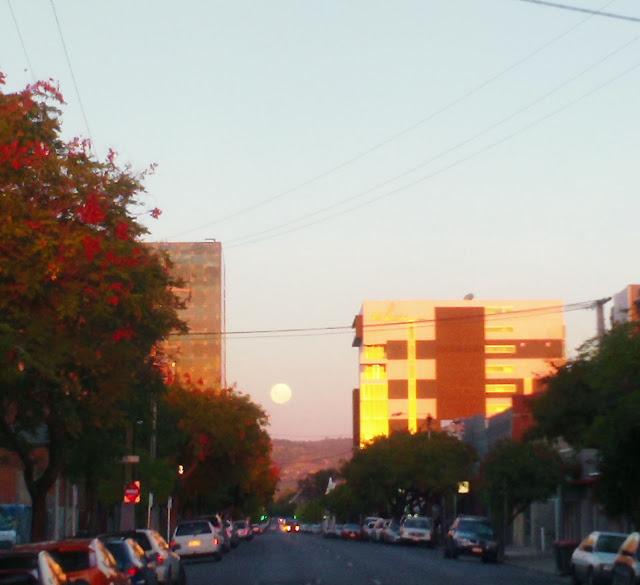 Today we found out that the other rep had been suspended under investigation for coercion... apparently he was a bit too pushy with a customer so we all had to go through a retraining on all of the things that are illegal in our work - some as simple as mentioning another company and others more severe with consequences such as a $50k fine and imprisonment.

On turf today I made a sale in the first half hour then continued on from call box to call box... half the area had call boxes preventing any opportunity for direct communication. I managed one sale later on but only because I tore into her logic until she finally gave in. While heading to the meeting point I ran into Danny whos Irish accent sounded a little thicker than usual.. apparently a bee flew into his mouth and stung the inside of his cheek causing it to rupture and bleed all over the place!

A lot of Normans here. 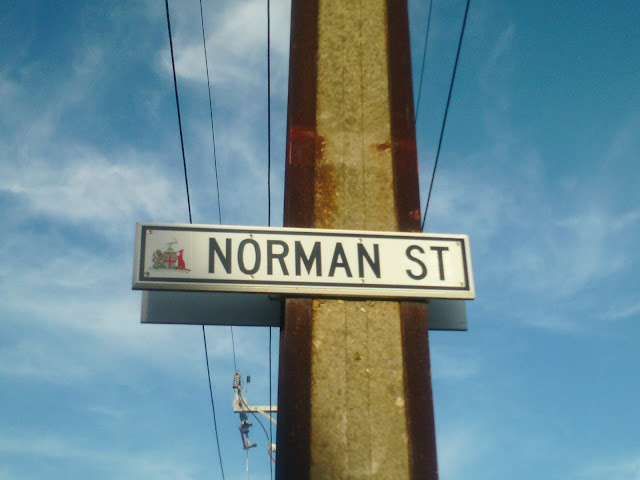 Back at the hostel I met a French girl who told me about some interesting customs from her home town including a six hour multi-course meal during the holidays where everyone just sits and eats course after course all day long.

Back at my room Roozbeh offered everybody free drinks and waited for us to figure out why. I quickly realized that it was because he had gotten the job he has been fantasizing about - electrical engineer at the Moonbaw mines. After a few celebratory drinks, I went with the Swedes (Marcus and Simon), the German girl (Matey), and the Italian (Ricardo) to the Fringe. Ricardo got us some VIP passes as his "coworkers" and after having some Piedina (fried flour tortilla sandwich with meat, lettuce, etc) we went to the Fringe Club (Fringe volunteers only) where we got in as coworkers again using the password "unicorn."

Finally we headed back to the hostel, with protest from Ricky who wanted to watch the sunrise at the beach, and on the way we discovered the truth about a fight from last night. The night before I had heard a guy saying "I don't want to fight you man," a loud banging noise, and someone saying "I'm calling the cops," but only now was I finding out the circumstances. Apparently someone stole one of the Irish guys' IPhone and then, after hearing that he was on video surveillance, brought it back saying that he found it by the toilet. Then, out of nowhere, a guy in a leather jacket started talking about fighting and stabbing people so another Irish guy asked him to leave. At this point the guy in the leather jacket tried to fight the Irish guy but fell down some stairs and that's when they called the cops.
Posted by Travis at 6:17 AM No comments: Links to this post

Today I opened an account with Commonwealth Bank and started training at my new job as a door to door salesman for Lumo Energy. Apparently I was one of seven selected out of over a hundred interviewed so I knew I was in for something good. The training was very interesting - we went over our company's history, product and what we would be doing there all while getting regular breaks to go play table tennis (ping pong) with our fellow trainees. After the first day of training I went over to James' for a bevy (drink) and then back to David's for one more night.

Today I recieved my PIN from my mom and was able to go check into a hostel called the Blue Galah - "galah" as in the bird, not the word Aussies use in referring to a fool...

For my first day on the job today I got some dress shoes from Salvos which were a really nice brand but apparently not made for walking... After walking in the rain all day on an empty stomach getting doors slammed in my face I was frankly not in a good mood and my feet bleeding from the shoes I was wearing did not help. In fact, the only highlight from today was the chips (fries) and the show one of the reps put on as she lit matches with her feet.

Today I came prepared with some better shoes, pants, a nice Lord of the Rings hat, new socks and some snacks from Cheap as Chips. Indeed this was a much better day - the weather was beautiful and the people were kinder. I didn't make any sales, but the environment was definitely condusive to learning.

After some table tennis (ping pong) this morning it was time to put my experiences to use. I was sure today would be a good day... and I was right! Made 2.5 sales today - one guy got to the vero (verification) call and decided I had taken up too much of his time. FOUR minutes and we would have been done but he wasn't happy because I had said "just a couple minutes" and unforuntately the whole process takes more like 10-15... to save hundreds of dollars.

This morning I asked about a job at the hostel that my French roommate, Yannick told me about last night over drinks. For 12 hours work a week I will now get free accommodation, food and laundry! I guess that puts me up at three jobs now - sales rep, hostel worker and handyman. After securing my new job I went to James' to finish the job I was doing for him.

When I finished he paid me $50 and I went to do some shopping... except everything is closed after 5p on Saturdays so I checked my email at Maccas (Mcdonalds) and spent the night at the meeting hall where we played table tennis, ate pizza and I slept under a mattress.

After the meeting today I went to James' again where Nathan replaced my bicycle seat so I wouldn't get nutted anymore when I hit bumps.
Posted by Travis at 5:18 AM No comments: Links to this post