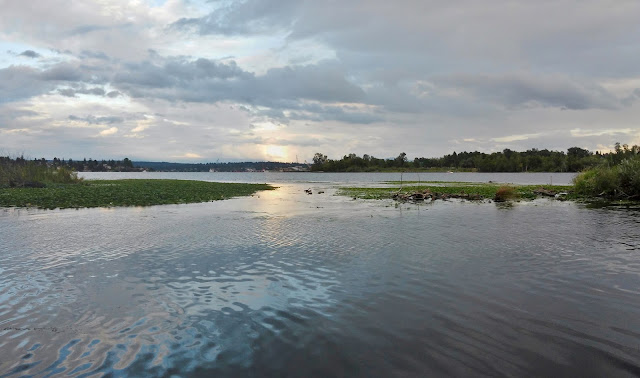 On Thursday, the 23rd of July, I arrived back in the states a little after noon. My first stop was to pick up a sim card followed by a visit to my neighbors whom I hadn't seen or talked to for a couple years. The next day I rode my mom's motorcycle to visit all my coworkers/friends at my old college and later I renewed my license. 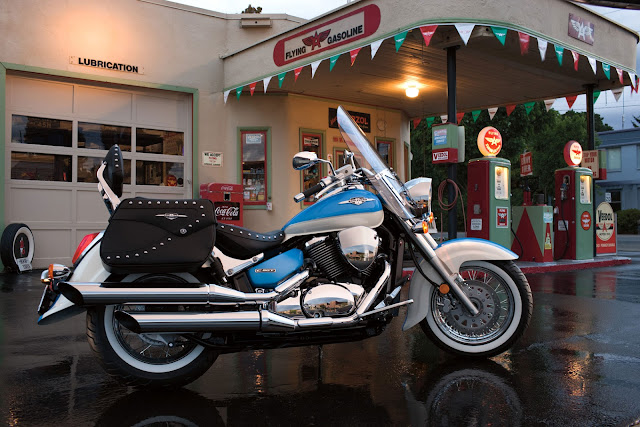 On my third day back I went to hang out with some old friends from high school and university. I met up with Josh and we had some Taco Bell with Loi before heading to Seattle to see Paco and visit our alma mater - the University of Washington. 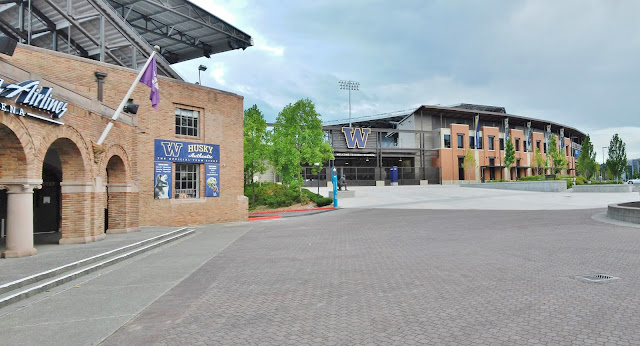 ALL PHOTOS
Posted by Travis at 11:43 AM 2 comments: Links to this post 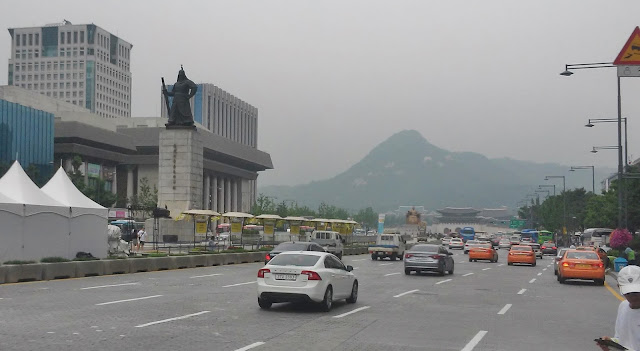 On Sunday, July 19th, I had breakfast at the airport with Chu Sum before saying goodbye and boarding my flight to South Korea. When I arrived I was met by some friends who took me to Ansan where I met with my friend Testimony and saw my other friend Aaron who is from New Zealand. This was a surprise for both of us, especially when you consider that we weren't even in an English speaking country. Testimony then took me out for some of the famous Korean BBQ and later we all went for some Korean ice dessert. 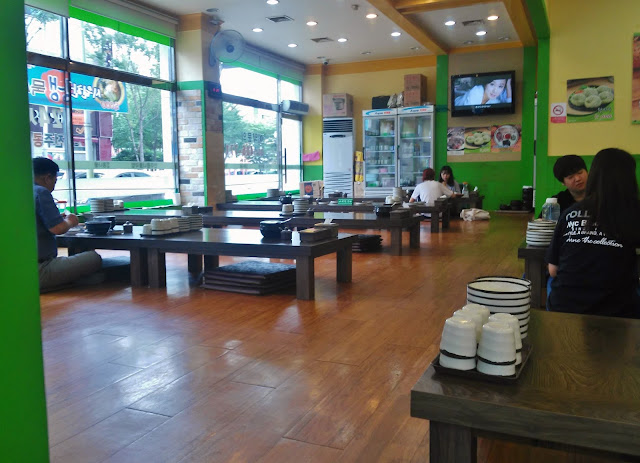 The next day Testimony took me out for a traditional Korean breakfast (mostly bean sprouts and lots of spice!) and showed me around a bit. Later I went to meet my friend Jeong, who I met while working in Milford Sound, New Zealand, and we walked around Seoul. We visited the National Assembly Building (parliament), sat by the Han River and went to Burger King. 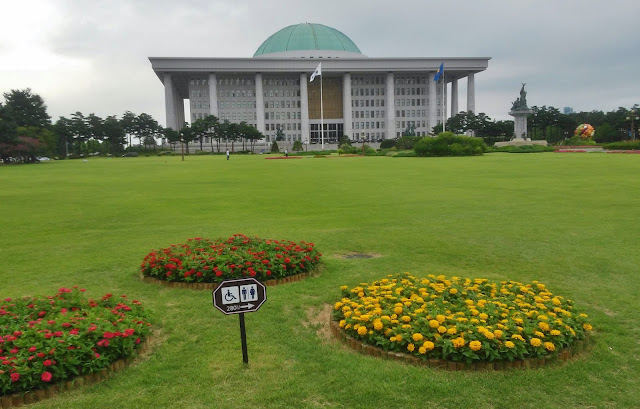 On day three I went to check out Seoul with Aaron and Jeong. We had some really good Bulgogi for lunch and then Aaron had to head back so Jeong and I went to an art museum. 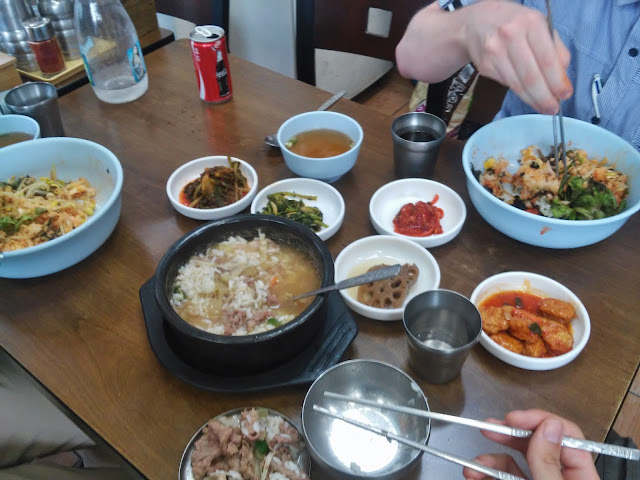 While we were at the museum I got in touch with my friend Suji (a former colleague from the UW) and we agreed to meet up in Insadong. Though, before heading over there, Jeong and I decided to go to Bukchon (North Village). 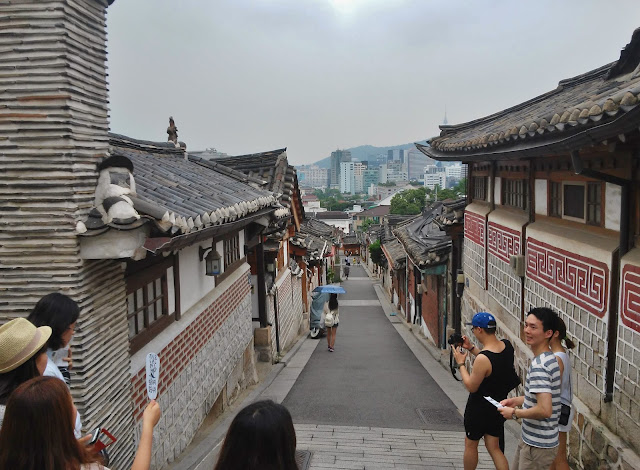 Bukchon had a lot of really cool traditional houses and some great views. After walking around in the hutong-like alleys and seeing the sites, we met up with Suji for coffee at the Insadong Shopping Mall. Finally, Jeong and I went to meet up with another friend from Milford (his girlfriend, Ellen) for a big hotpot buffet dinner. Hot pot is great - you just grab a bunch of tasty meats, veggies, noodles, etc. and chuck it all in a boiling pot in the middle of the table. I reckon its probably one of the most popular things to do with friends in Korea. 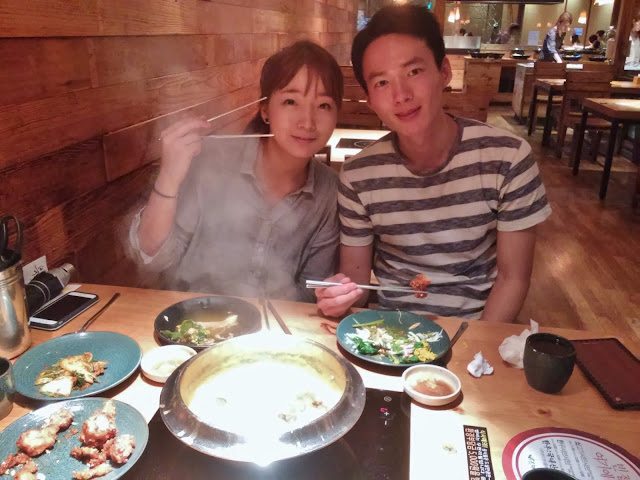 The next day Aaron, Testimony and I had another Korean breakfast, some bubble tea and went to Hanyang University. Then we went for lunch at an interesting restaurant where I had a very interesting meal, a Korean specialty - dog soup. 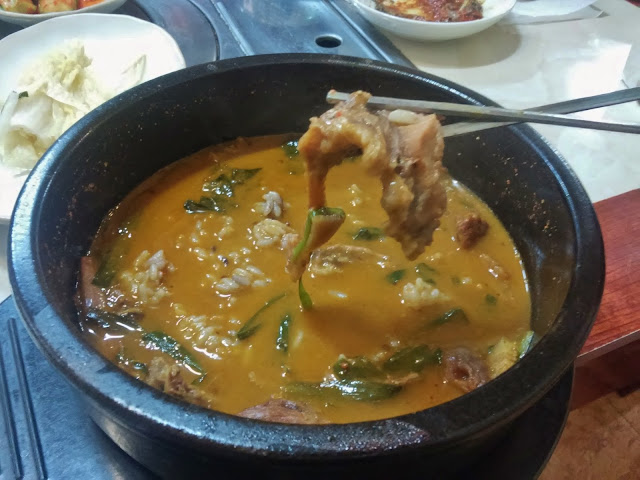 It wasn't the most flavorful meat but the soup wasn't bad as they did a decent job adding spices to compensate. After lunch we went for a walk in the park before heading to the airport... Today was the day. For the first time in three and a half years I was finally going home. I boarded my plane for the 11 hour flight that would bring me back stateside... to America.

Posted by Travis at 9:06 AM 2 comments: Links to this post 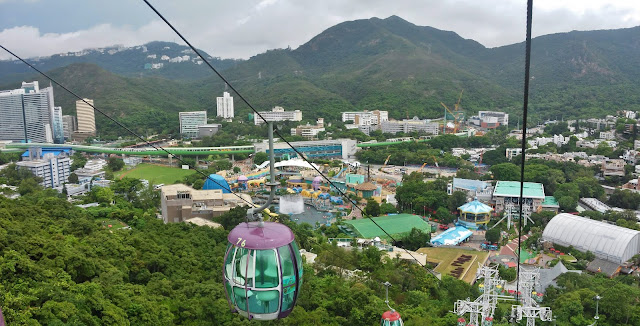 On Friday, July 17th, it was my last day of hanging out in Hong Kong so I went to Ocean Park with Chu Sum for a visit we had been planning since I first arrived. After arriving on the bus, we took the cable car up to the rides area and had a look around. We went on a few small ones to warm up but I wasn't going to let Chu Sum leave without going on some of the bigger rides - he had never been on one of them before.

Well, we soon discovered that Chu Sum is actually quite fond of the big rides and couldn't get enough! We probably would have been riding the rides all night if we didn't have somewhere else to be. Still, between the roller coasters and repeat visits to the drop tower, we managed a visit to some of the interesting animals of Ocean Park. 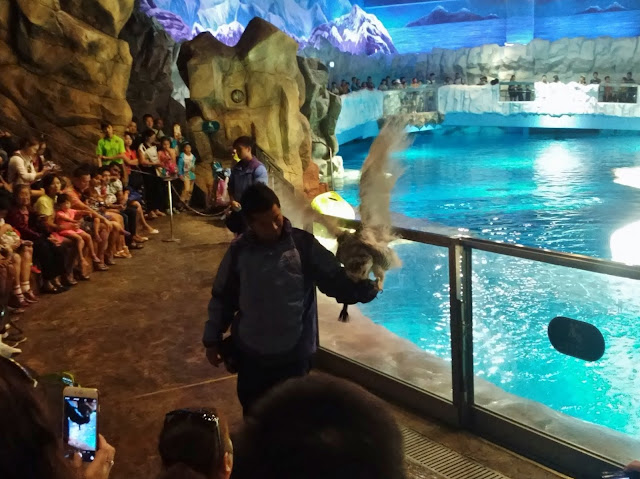 The next day I finished packing my bags and had dinner at Chu Sums. The following morning would be my last day in Hong Kong and my first day in South Korea.

Posted by Travis at 3:50 PM 2 comments: Links to this post 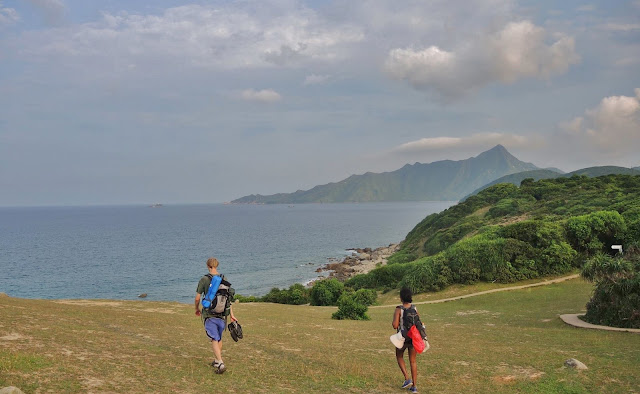 On Wednesday, July 15, Chu Sum, Waji and I went to Tap Mun (Grass Island) for camping. After arriving, we made our way into the jungle and soon found ourselves surrounded by giant Golden Orb spiders which are the same spiders as some in Australia that are known to eat birds. 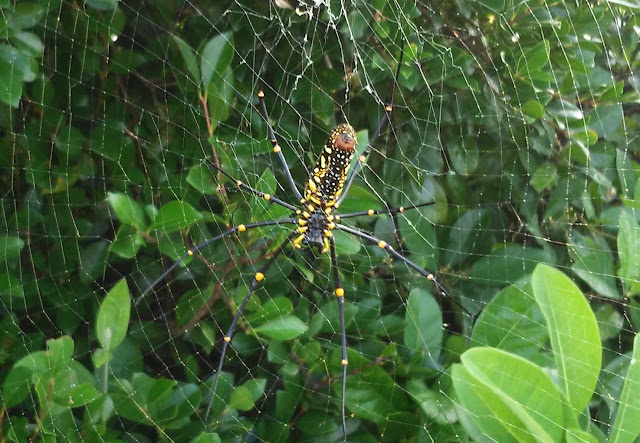 We continued hiking around the island until we found ourselves back at the beginning of a loop. We walked a bit further before setting up camp and, after an attempt at swimming in some shallow waves in low light, starting dinner. We decided to cook up some BBQ using our custom camping stove that Chu Sum put together with toilet paper, lighter fluid and some empty cans. The toilet paper acted as a wick and the lighter fluid fueled a flame that was surprisingly effective for cooking. That night it was so hot that nobody could sleep... though I'd have to say I probably made the most effort to that end. Meanwhile, the others were out running around and playing with fire... 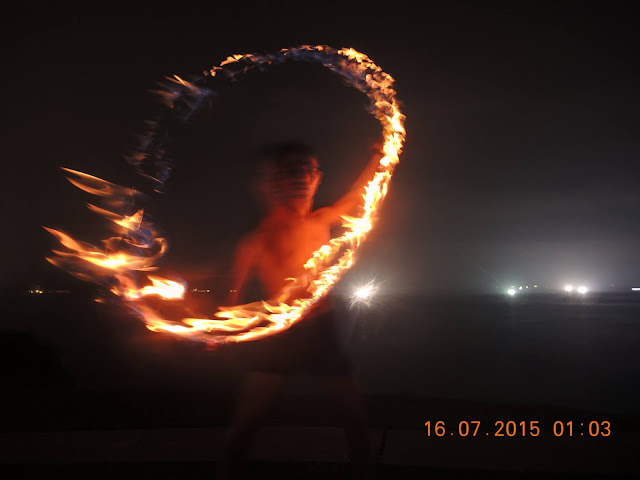 The next day we woke up to a beautiful sunrise and went for a swim. This time we had a bit more light and we found a place where the water was easier to access without walking on too many sharp rocks. The deeper water made it easy to swim around between the boulders and explore which was a lot of fun with the use of my goggles. 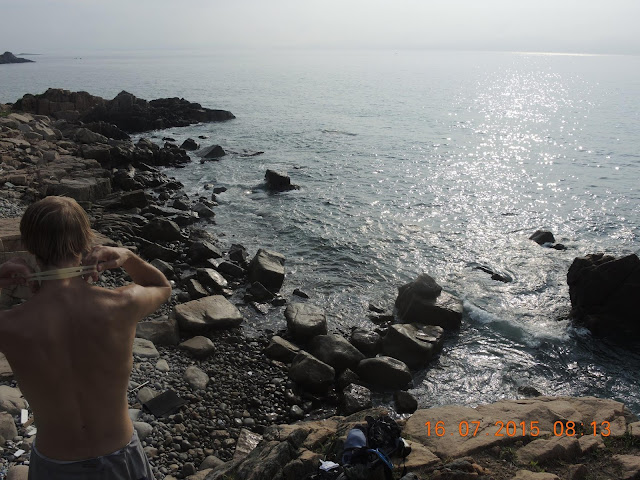 Finally, we headed back to the main village, had some breakfast at a little restaurant and took the ferry back to Ma Liu Shui Ferry Pier in Sha Tin. That night I enjoyed a big dinner at a nice restaurant with some of the water polo guys. I now only had two days left in Hong Kong before heading off to South Korea and then back to the USA. 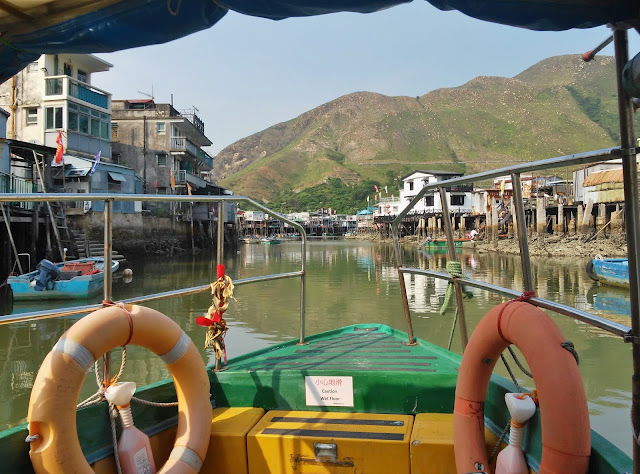 On Monday, July 13th, I went to Tai O with Anita to see the pink dolphins (Chinese white dolphin). We left from a fishing village with lots of boats and stilted buildings and it was there that we also saw some strange little temples. I suppose they're pretty common in Hong Kong but I was a bit taken aback by this one which had a warrior statue giving us the finger... 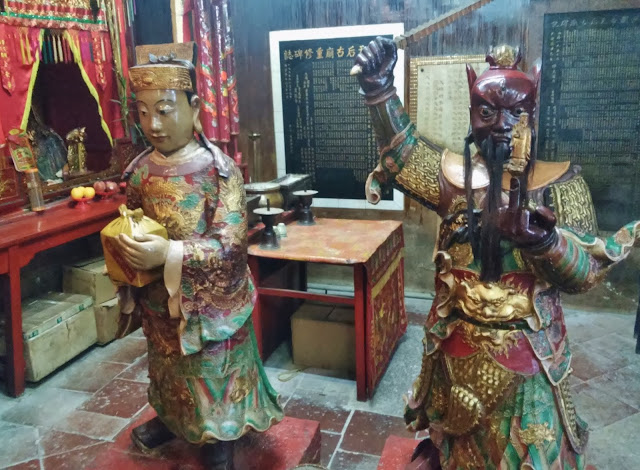 Temples are not really my thing anyway but there wasn't much else to see in the village. They also have a lot of dried fish but, again, not something I'm really interested in.

The boat took us out for about 20 HKD (about 2-3 USD) and we had a good half an hour or so to look for the dolphins. While we weren't able to get any really great shots, we did see quite a few of them. Overall, I'd say it was worth it just for the experience and I'm sure that a lot of people manage to get better photos/video than I did. 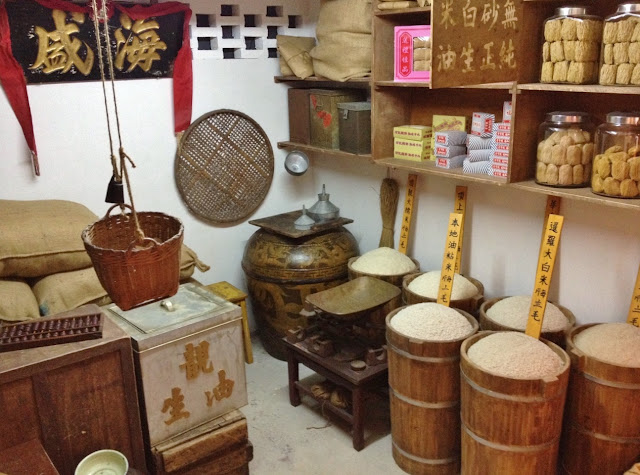 Over the last couple weeks I saw some friends for the last time as I would soon be leaving Hong Kong. I had another dinner in Causeway Bay with Sarah, Peter and their family and went swimming with friends in Tuen Mun after a big feed at Grace's. On Thursday, 2nd of July, I went for traditional noodles with Anita and Chu Sum and we visited an interesting museum with displays showing the lifestyle in Hong Kong over the years. 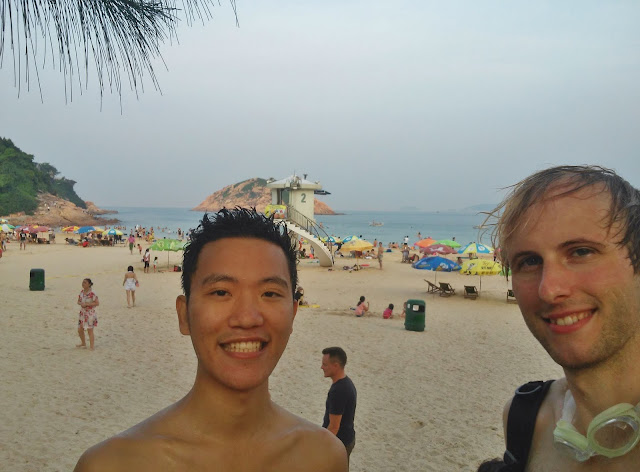 About a week later Chu Sum and I went swimming at Shek O. This time we joined the crowds at the main beach where they have floating islands you can swim to. We body surfed, played "find the rock" and dived off the floating islands - it was a fun day.