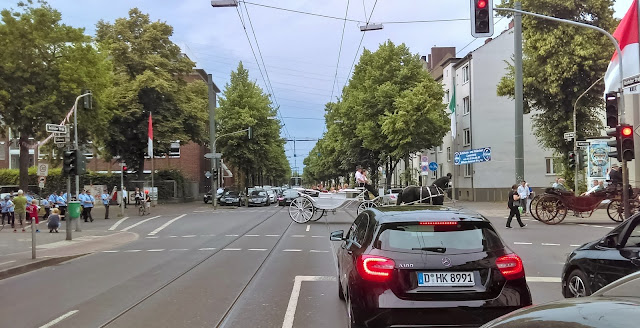 On Monday, May 7th, I finally bought my scooter. I had lived in Düsseldorf for eight months with just a bicycle as my sole form of transportation. Yeah, I could have opted for the train on the days that were rainy, cold, snowy, etc., but why give up my freedom when it's going to cost me 70 euros a month (or more without a monatsticket). Besides, the bicycle was generally the faster option anyway. No, the exercise wasn't doing me any harm (at least, not initially), so I pushed through the rain, sleet and snow; all the while saving up every euro so that I could invest in more of a long-term solution. Okay, the last month or two were really hard on my knees - I even had to wear knee braces - but it was worth it in the end. 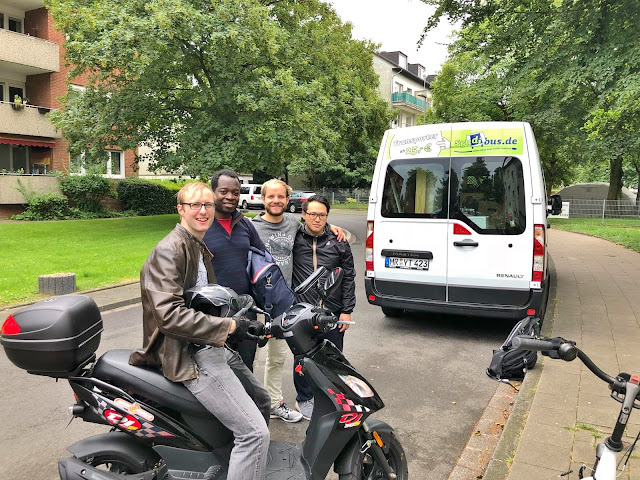 The only problem with my new nifty 50 was that it arrived gedrösselt or "dethrottled" meaning that it was limited to 25 kph (about 15 mph). This was not what I had ordered but, thankfully, it only took a few days for the Mechaniker to get the part in so that it could be ungedrösselt. I was also a bit frustrated that he kept putting off sorting out the appropriate TUV (in the end he never did) but, according to him, it doesn't really matter... I like my scooter, so whatever. 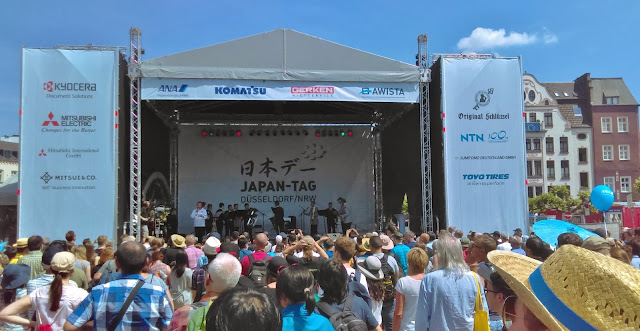 Two weeks later I went to the Altstadt (old city) for Japan Tag with a few friends. We walked along the Rhine looking for food and checking out all of the weird comic book costumes. As we got further along, the smell of marijuana got really intense... we did eventually find food - I got the Yakisoba. After eating, we watched some people playing drums then got some ice cream at Pia Eis. Pia Eis is probably the most popular place in town for ice cream because it's really good and only costs one euro for a Kugel (cone). 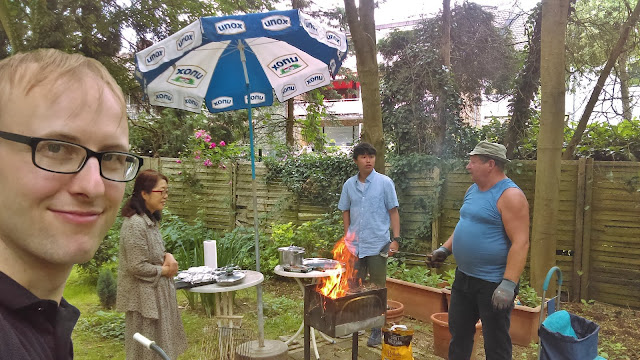 Over the next few weeks summer really kicked off. A colleague had a BBQ one day, church friends the other, then there was a wedding, a BBQ for a colleague that was going back to France, a birthday in Cologne, frisbee in the park, swimming at the lake, bowling with some newcomers from Korea, another wedding down in Stuttgart, usw. 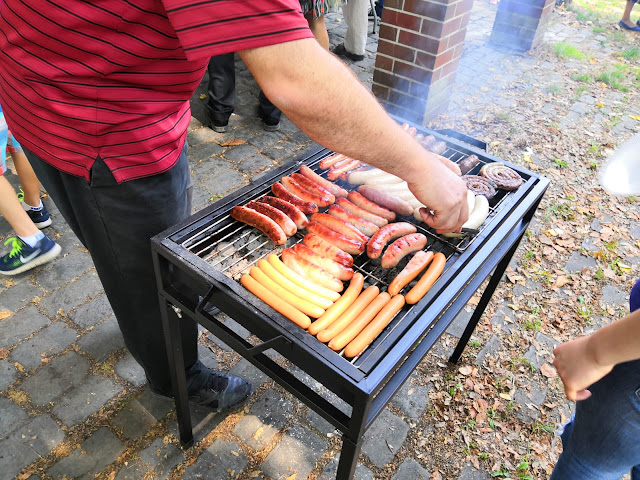 I hosted a few visiting friends here and there, and tried to join Rollernacht (a night of skating through the streets of Düsseldorf with hundred of other locals), but I got kicked out because I was on a longboard, not wearing skates. I similarly got kicked out of the park for pushing my scooter (scary motorized machine that could hurt someone if it were to be turned on...). The park official threatened to have me arrested if I wasn't gone in 30 minutes.

The birthday in Cologne was interesting partly because of the scale of it, and partly because of three-hour round-trip journey. My scooter, which, at the time, could actually get up to 75 kph (now only 65 for some reason - still not bad considering that it's supposed to be limited to 50 kph) is only intended for getting around town... not for intercity travel. In any case, I saved about 30-40 euros (>18 euros each way by train) with the scooter which only took one 2.5 L tank (about 3 euros) to do the whole trip there and back. So, it was worth it. I also had to get a handyhalter (phone holder) so that I could use my GPS to navigate the Landstraßen (highways) and back roads that I had to use in order to avoid the autobahn (no translation needed I hope!). When I told the Mechaniker what I planned to do with it, he didn't miss a beat in saying, "bis drei wochen" or "see you in three weeks!". Yeah, it was a looong ride.

I also kind of joined a band during this time. My colleague, Wendell (the one who had the BBQ), has been renting out a room under a performance hall for the last couple decades in which he has stored literally about every piece of rock band equipment you could ask for. Him and his buddies, along with the occasional colleague such as myself, meet there regularly to spend the night jamming and recording their stuff. It was pretty cool to hang out and learn a few things from some guys who, while they know how to play pretty well, really just do it for fun on the weekends.

My summer wasn't all fun and games though. I managed to sort out a few details of my life here in Deutschland. Everything from Rentenversicherung or "retirement insurance" (required by law) to getting my own waschmachine for doing laundry. I actually got that from a friend who was moving and didn't need it anymore. Of course, I helped her move and chipped in for the cost a bit. Then a couple other friends, the same ones that installed it for her, helped install it at my place.

The expenses continued to pile up as I invested in a couple visits to the local healthcare providers. We've all heard the story that healthcare in Europe is more affordable... well, that's not necessarily true. I actually had free healthcare back in the states for one thing due to my low level of income there (and to the fact that I lived in a liberal state). In Europe people still manage to spend a bit on their healthcare. Some of my colleagues spend over 200 euros a month on it even though they're single like me. Of course, that probably still sounds good to some folks back in the states. In any case, I managed to get away with 59 euros a month for private care that only pays for medically necessary treatment. That being said, my surprise bill of 500 euros for a referral to get my heart, lungs and circulatory system checked out was covered. It seems that I got lucky because my doctor had checked the "Kurativ" box and not the "Präventiv" one. It cost me 10 euros every time I talked to the lady at, or visited, the check in counter (which adds up when your talking about checking office hours over the phone, making an appointment, coming in for said appointment, and then having to go in again to get a copy of the referral because the other place didn't give it back...). I also paid over 80 bucks for my initial checkup and a blood test that I had done as well as another 60 bucks for a standard visit to the dentist, so things can still get pretty expensive even when you live in a country with universal healthcare!

For all the expenses, I really can't complain though. Not only has the experience been "top", as the Germans say, but I've managed to put away quite a bit of coin. One of the companies I work for, JLC (Junior Language Club), likes to put on so-called "camps" during the different seasons - summer being the biggest one. So, not knowing how much work it would be, I accepted, at first, everything they offered me. That included four hours with young kids in the morning, and four hours with teenagers in the afternoon - on top of my normal work schedule... I had some days that were 13 hours with no breaks. Needless to say, that was as financially fruitful as it was stressful.