Today I caught a rat and no possums. I hiked up Butcher Track and over on Cattle Ridge for a swim in the Orongorongo River. 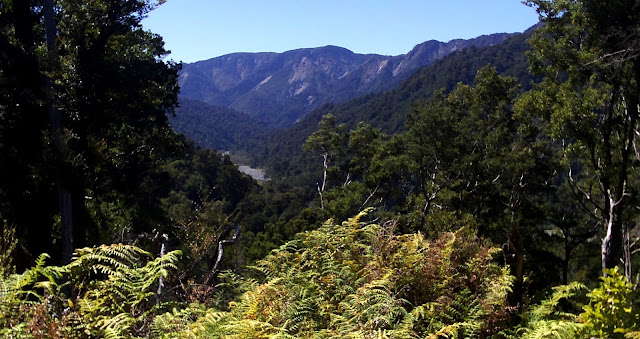 Then I took Orongorongo Track back to camp where I noticed that one possum had actually stolen my soap...

All Photos
Posted by Travis at 6:20 PM No comments: Links to this post 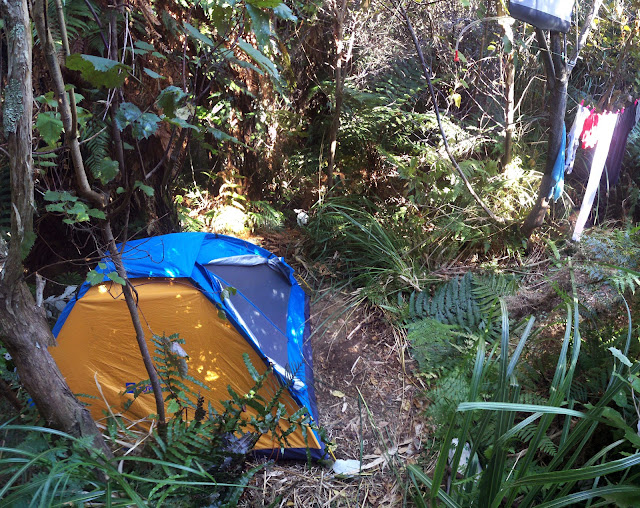 Today I caught one medium possum and another escaped. Next I went to town for the shops where I got a space blanket to help with the cold and used Skype at the library.

Today I caught one medium possum and one escaped again. In town I went to Salvos and found some great motorcycle boots for $8, perfect fitting like-new jeans for $3, a sleeping bag for $8.50, and thermals for $6.50! I called local dealer Chris about selling the fur and he actually buys tail fur as well so I'll be collecting that from now on. At the library I met a kiwi traveller who has spent years in America and Australia monastery hopping. The ski resort called me back having struggled to contact my references. Back at camp I set three more traps and at 11 pm went out to deal with a rather big possum. As I was checking its eyes to see if it was healthy it suddenly jumped out at me from a meter away and almost ripped my face off! Fortunately the trap yanked it back down... 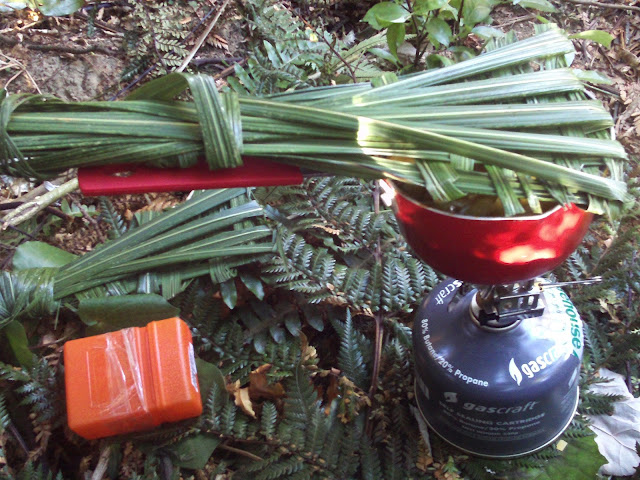 Today I had no possums when I woke up. I made a trail and moved a trap to it then made improvements on the rest.

Posted by Travis at 1:57 AM No comments: Links to this post

Cash In, Move Out 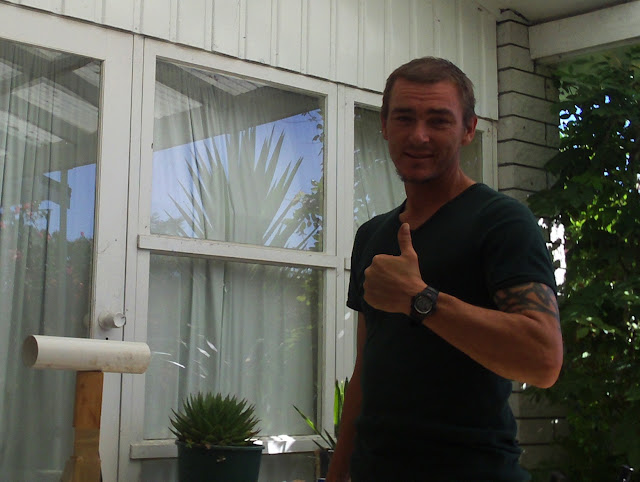 Today Aaron and I turned in our fur and cashed the check for $98.70 - about $10 or so less than we expected... Later we had some drinks and a big fish & chip feed then I planned my travels for the following weeks.

Today I packed up and said farewell to the Kerrs. Outside of Wainuiomata I stopped to check my location and ended up giving a kiwi fella a ride back into town who otherwise would have been walking for days!

Though, I'm sure he would have hitched at some point. Apparently he got left behind after a party because nobody knew where he was. When I finally reached Rimutaka Forest Park I had just enough daylight to set up camp and put some traps out.
Posted by Travis at 11:21 PM No comments: Links to this post

Today I had six escapes... leaves and sticks kept the traps from grabbing and we should have checked at night while they were still caught. After brekky we moved to base camp three (BC3) and hiked up to set the traps up on the ridge. 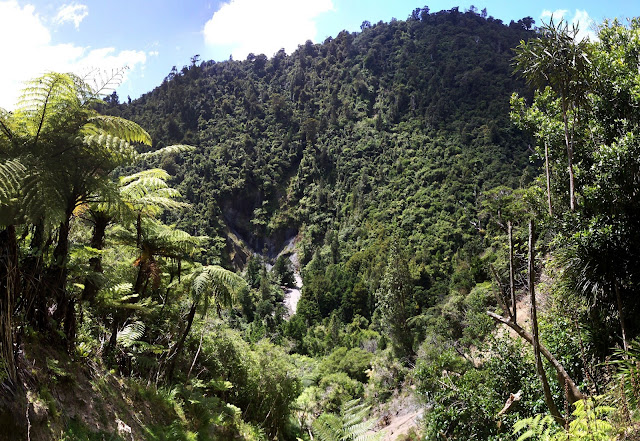 At the end of the line we got reception and we sent Samala a text to ask for more lure. I also responded for a position as a caretaker at a ski resort on the South Island. On the way back we found that we had already caught one rat and one possum. 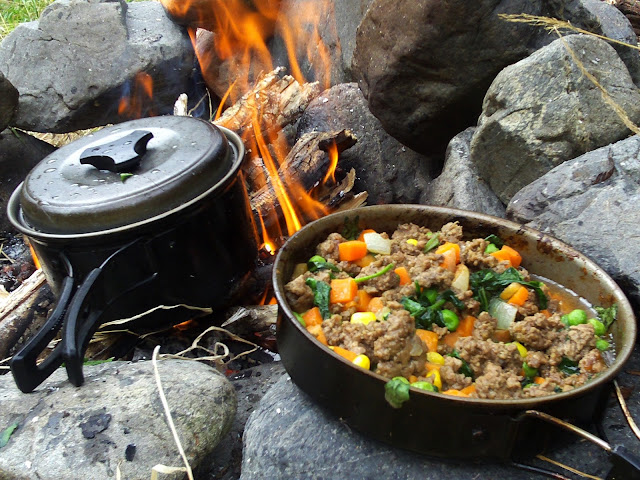 Today we caught one rat and one possum. After Aaron went home I headed back for camp and foraged for some water cress on the way. Back at camp I built a teepee and cooked up minced meat with veggies and the water cress. 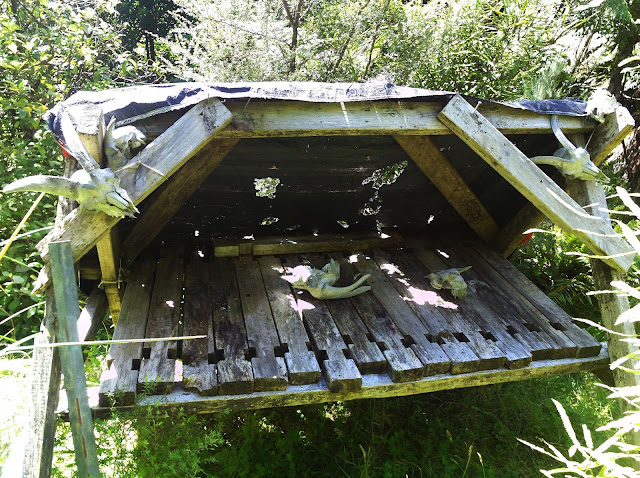 Today I got a new fur bag and caught three possums - two large and one small. I cleared the whole trail on the way up to make it easier and set seven traps so I didn't get back to camp until late. After taking a shower under the moonlight using the camp shower I had pasta, some bland veggies and tea.

Today I saw four goats on the slip on the way up to check the traps. I caught three possums - two large and one small, one escaped. 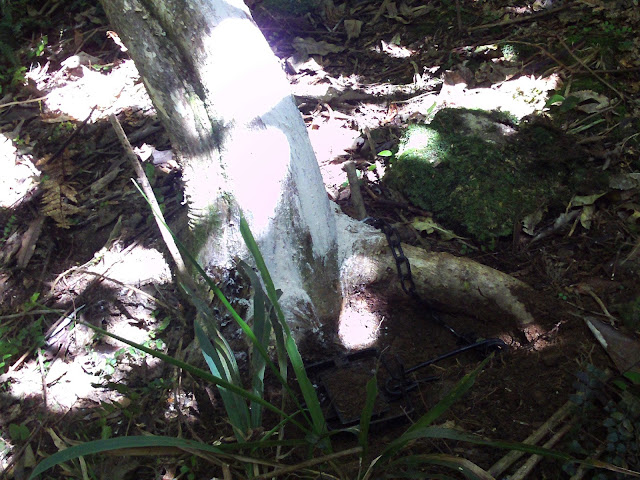 I set eight more traps and on the way back saw what looked to be goats or maybe boar walking in the scrub. After tea I had tea made from leaves of the Kawakawa shrub. 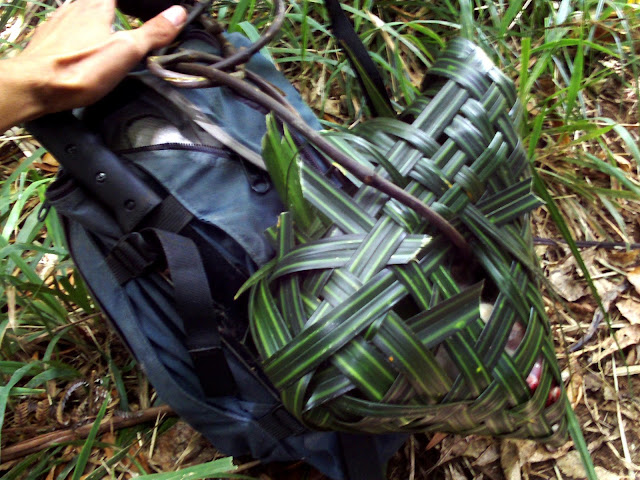 Last night I was woken up by scratching on the tent at 1 am so I checked the traps by the camp and found one rat and one large possum. In the morning I found five possums - three large, one small and one juvenile caught by his stuff... three escapees. I made a basket and ended up putting four legs in it by the end of the day. Later that evening I smoked them. 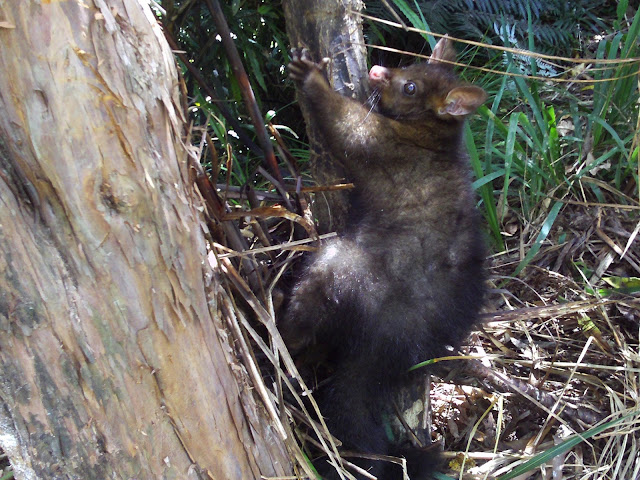 Today I caught two rats and six possums - five large and one juvenile, none escaped. For dinner I had pasta, two possum legs (kebab and pan fried), rice and tea. 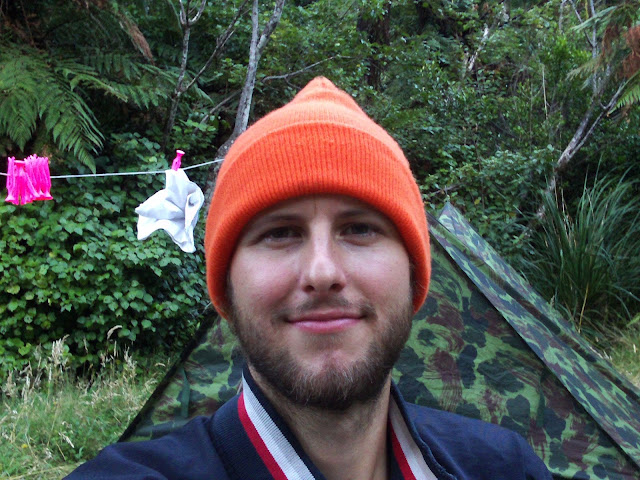 Today I caught three possums - two medium and one juvenile, one escaped. Back at camp I thatched a roof for the teepee and weaved a hat. Aaron soon arrived and noted that I had the "wild eyes" - a condition where your forehead becomes completely smooth, your eyes kind of squinty and your facial expressions change very little as a result of being removed from the stimulation of society. That night we ate Paua patties and Aaron gave me a mini palm-sized camp stove to help with my packing woes.

Today we caught three possums - two medium and one juvenile, one escaped. Later we hiked up and looked for a place where Aaron came off his bike a few months back. He was severely injured and had to be rescued by emergency services. 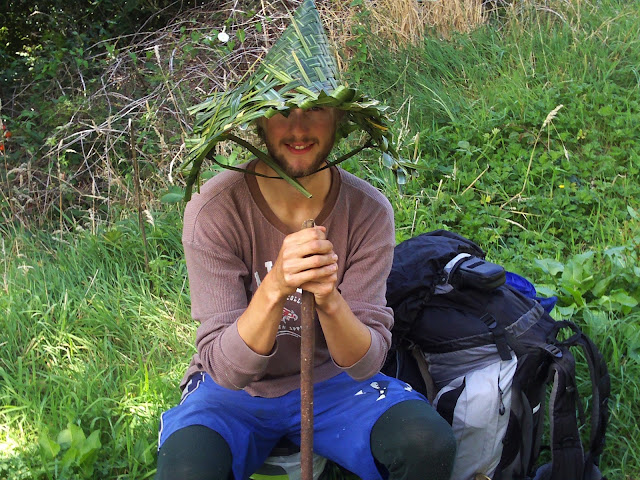 Today we caught one baby possum and decided to head out. Back at the house we had some drinks, cooked up some steak and sausages on the barbie then fixed a problem with the bike by sanding carbonate off the spark plug and cleaning the air filter with petrol.

More Photos
Posted by Travis at 10:07 PM No comments: Links to this post

On Sunday, February 10th, we caught five possums, four evaded my improvements and another three escaped. Later Aaron came back and that night we caught two possums and smoked the hind legs. 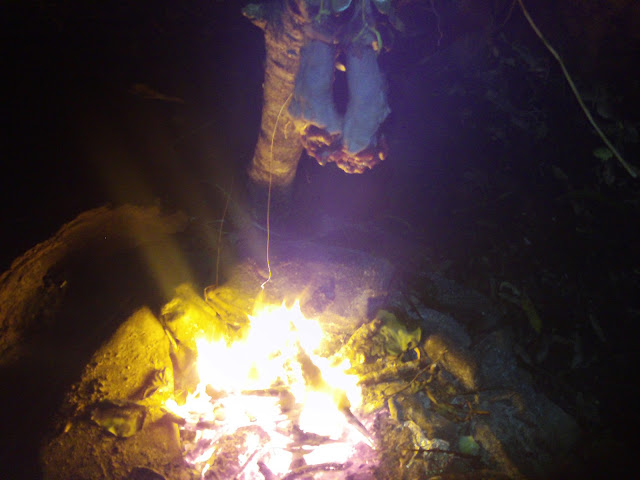 The next day we caught one possum and one escaped. We decided to start burying the traps so the possums don't see them. Back at camp I skinned the legs of the possum we caught, chopped up the meat, cooked some on a kebab and the rest I fried up with some curry and onion. 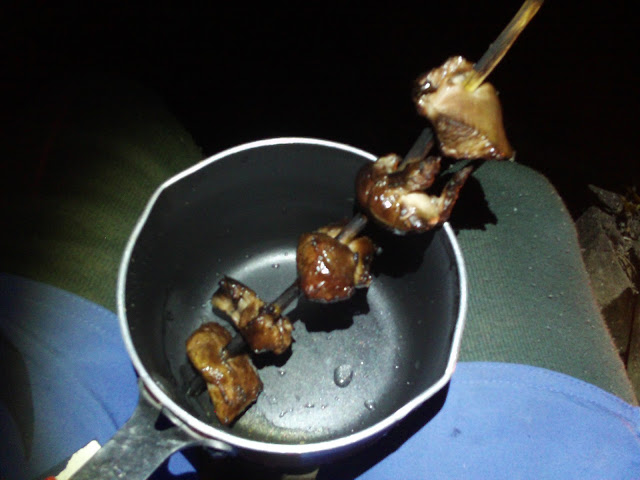 We caught three possums and headed out and, the next day, I applied for a job at a ski resort and we headed back into the bush where we found that two possums had escaped our traps.


All Photos
Posted by Travis at 9:59 PM No comments: Links to this post 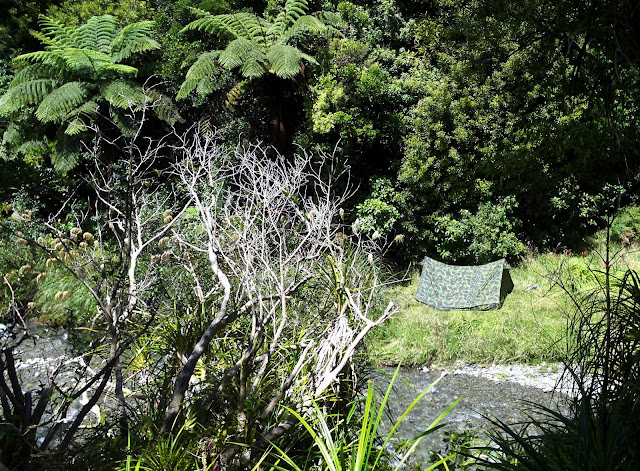 Today we caught one possum. Another one licked some of the other lures but avoided the traps. We hiked up to see base camp two and three (BC2 & BC3). Later we set more traps and cooked steak and sausage kebabs over the fire again.

Today we caught three possums - one large, two small. Aaron went home and I set two traps close by to test out the "minefield" technique.

Today I caught a rat and a possum. While I was eating my lunch by the river I helped direct lost hikers. Later I set six traps and improved the others. For tea I fried up some bread made from the lure (flour and cinnamon) and water.


All Photos
Posted by Travis at 9:14 PM No comments: Links to this post 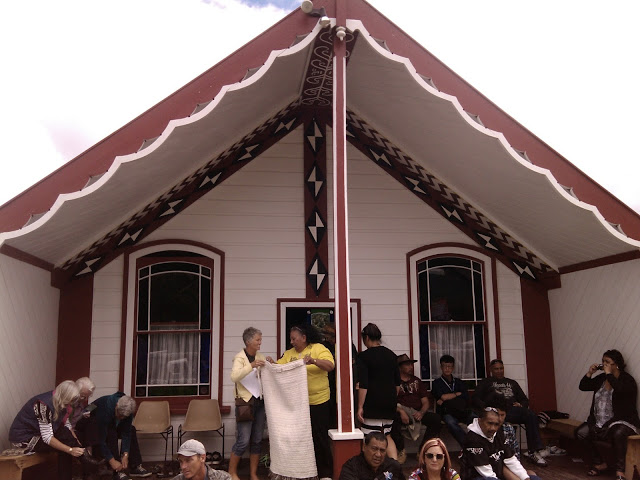 Today we went to Whakarongotai Marae and had a Hangi. Pronounced "hungy" a Hangi is food prepared in an earthen stove. Later we returned to the bush and set up camp at base camp one. After setting some traps we cooked up some steak and sausage kebabs over the fire.

All Photos
Posted by Travis at 8:48 PM No comments: Links to this post

Today I packed and lost the rego for the bike on the way to the library in Otaki. After getting some food I rode to Aaron's where we ate Kina (Sea Urchin) then some Paua (Shellfish) patties for dinner. Later we went to the beach and hunted for Cockles and Pipis.

Today we had bacon and eggs for brekky, made some Portuguese fried bread and went to base camp one (BC1) in the bush by Kapakapanui in the Tararua Ranges. There we set some traps and set up camp next to the glow worms. That night we took a couple test shots with the air rifle. I didn't realize how powerful it was and had my eye too close to the sight so I ended up getting my head sliced open from the recoil. For dinner we had steak, sausages and ramen.

Today we caught two possums and I replaced the rego on the bike.

Posted by Travis at 4:14 AM No comments: Links to this post

Today I showered, packed and rode to Feilding where I spent the day at Maccas then found a place to camp by the Oroua River just outside of town.

Today I weaved a mat and ate my brekky while exploring a trail behind my camp. Then I smoothed out an area and moved my tent further back. After making a bench I bathed in the river and went to Maccas.

Today I worked on the trail behind my camp, went to the library, did more trail blazing and went to sleep. While sleeping I heard a guy in the farm behind my camp yelling, "oi oi yaw yaw yaw!" - probably mustering some stock.

Today I picked up the new rego at Mikes house in Halcombe then went to Maccas in Feilding. Back at camp I did my washing and bathed in the river again. 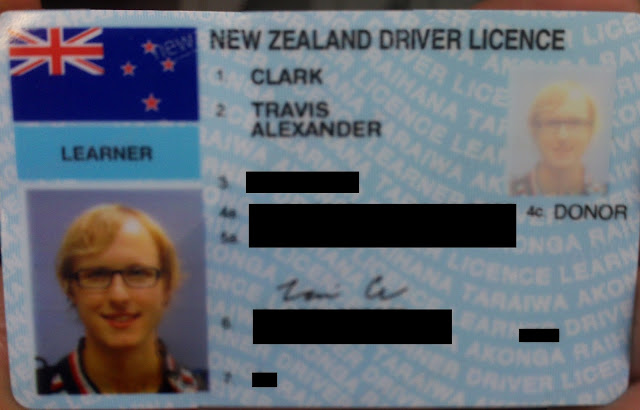 Today I went to Maccas with a passenger in my helmet... a big, hairy huntsman. After returning to camp I packed up and went to Palmy for my mail then stopped at the Manawatu River for a swim with some gypsies before heading to Otaki. There I camped with some new friends, Aaron and Brendan, at a place called Monakau North. Aaron and Brendan are keen bushmen and offered to teach me about possuming (trapping possums). I also ran into Paul and Matt from Reid's Farm back in Taupo.

Today I dove in the river and then set up my fishing gear that Aaron made for me out of a line, hook and sinker wrapped around a stick. Later I moved my camp down by the river and made ramen, mashed potatoes and beans for dinner. While sitting at my campfire I could hear possums in the trees behind me.

Posted by Travis at 3:26 AM No comments: Links to this post