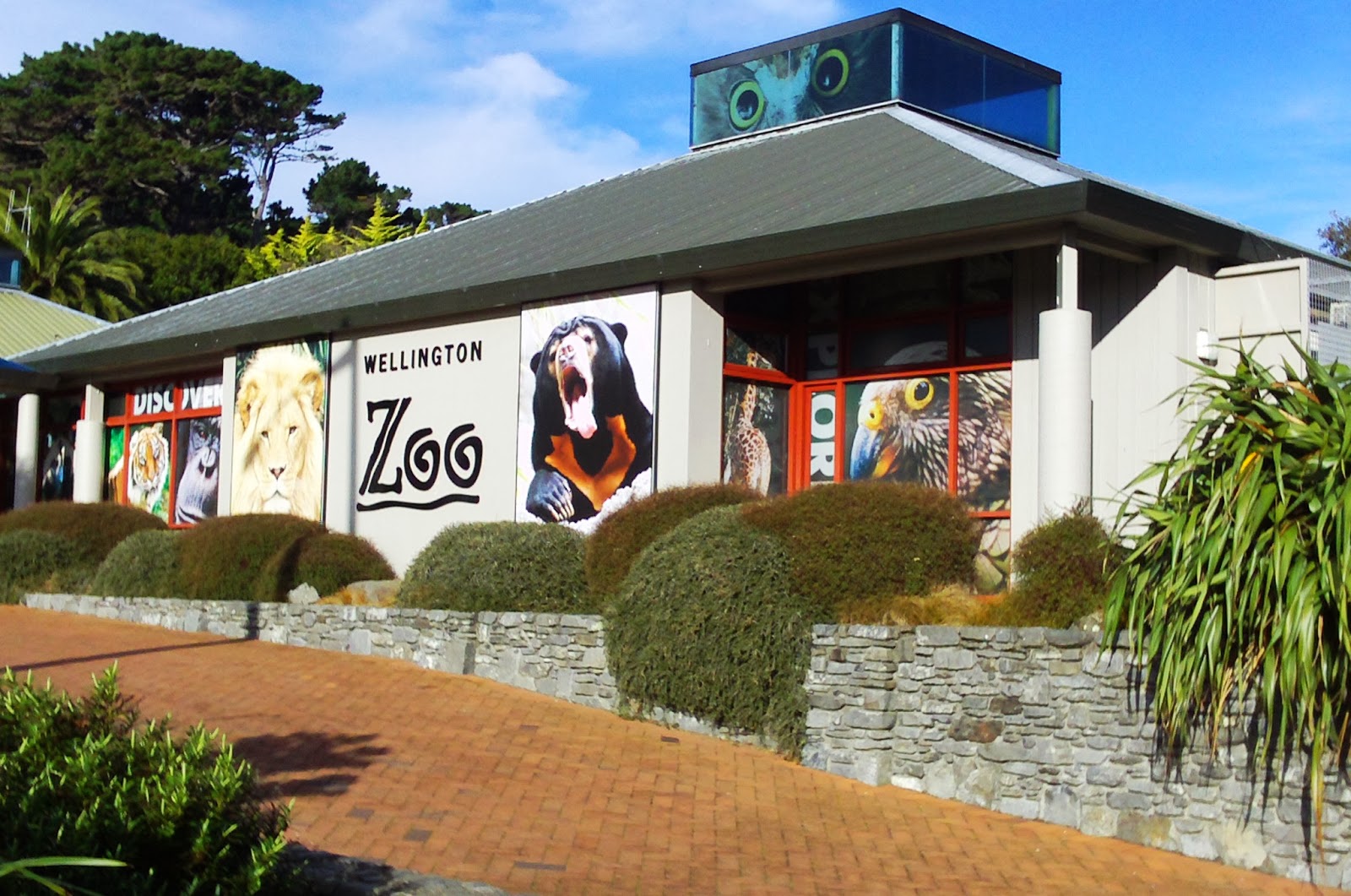 Over the last couple days I had to work and Anita spent time at the meeting hall. Today I met up with Anita for her last day in Wellington. We took the cable car, had some tasty Cambodian food for lunch at a restaurant called Siem Reap and went to the Wellington Zoo.

Posted by Travis at 2:00 PM No comments: Links to this post 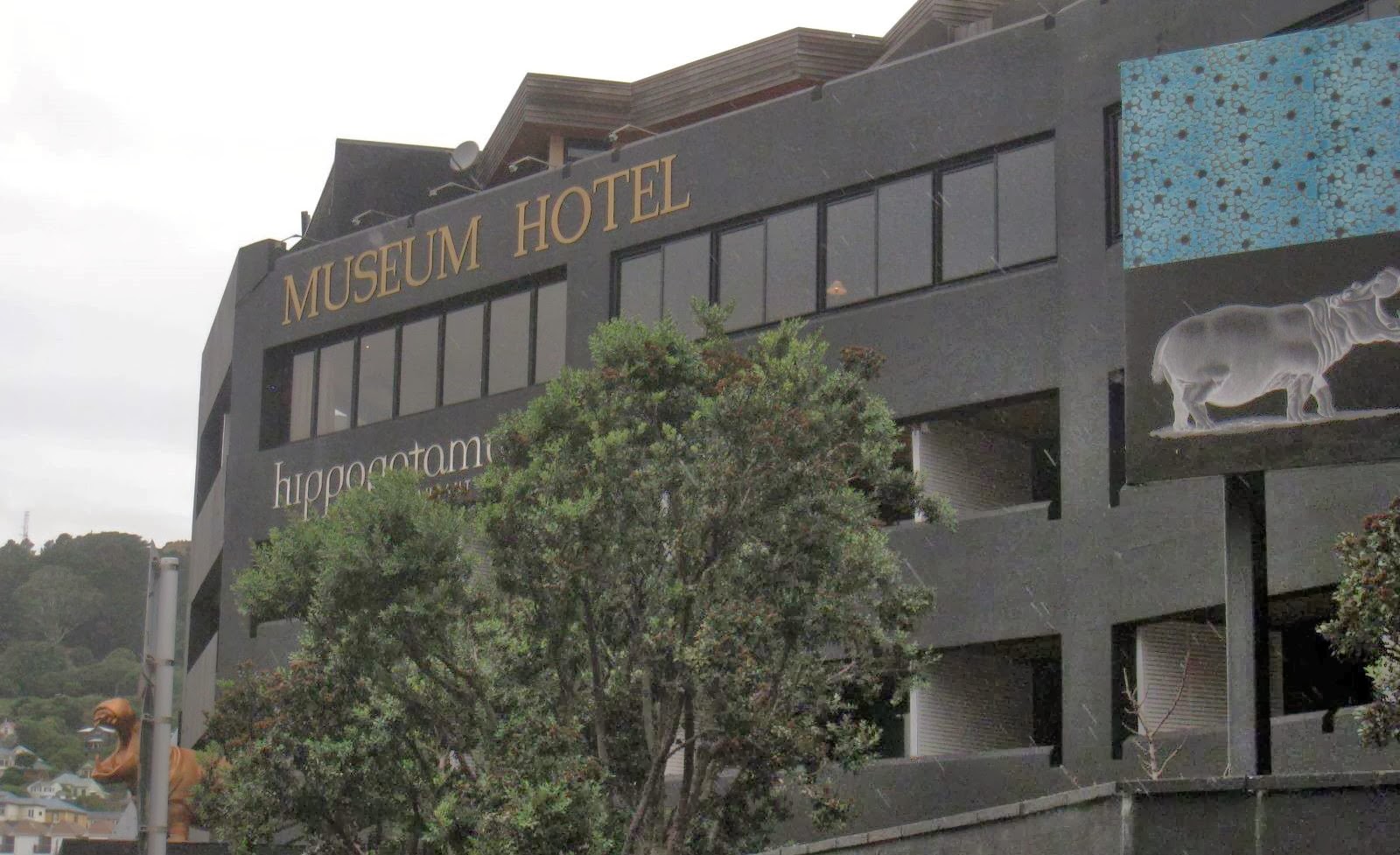 Today Anita and I went to the highly recommended Museum Hotel where we saw a variety of paintings; some creative or otherwise quirky and humorous abstracts and others clever depictions of New Zealand's social and political environment.


ALL PHOTOS
Posted by Travis at 1:43 PM No comments: Links to this post

On May 15th my friend Anita, who I flatted with in Brisbane, arrived from Melbourne to visit. She was surprisingly keen to try out the lifestyle I had in my little shack on the hill and even gave my cold garden hose shower a go the next day before we left for the Te Papa Museum. Te Papa had many things to illustrate the biological, geographical and even social changes in New Zealand's history but, for me at least, the main attraction was the Collosal Squid - the only one in the world on display in a museum.

Posted by Travis at 1:27 PM No comments: Links to this post

On May 11th I had been in Auckland for a couple days meeting up with a few others from Wellington. This day we went to Auckland's Sky Tower followed by the Auckland Museum where we spent some time looking at several artifacts from New Zealand's native and colonial history. 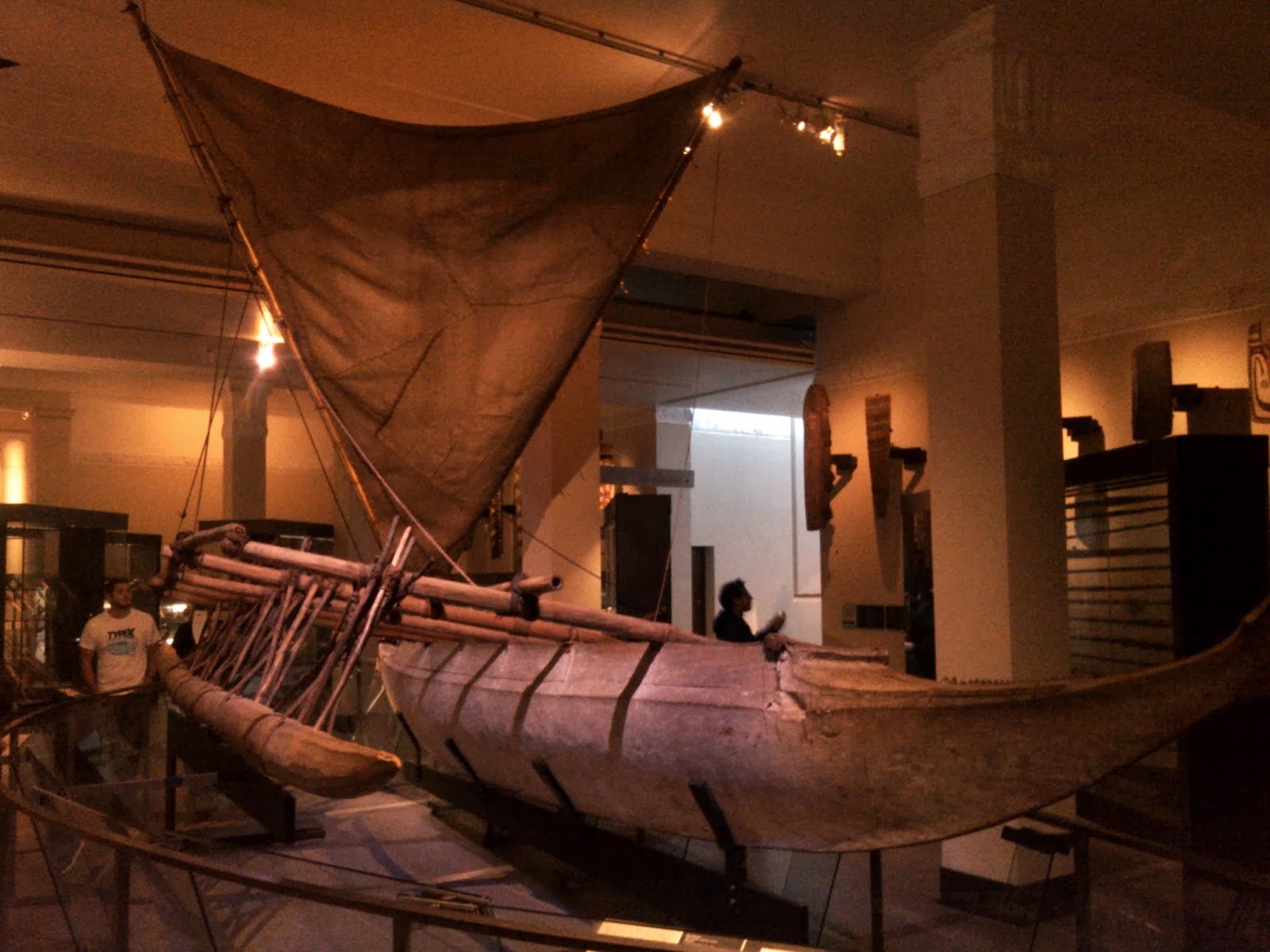 The next day we went sailing on a old sailing ship/museum. 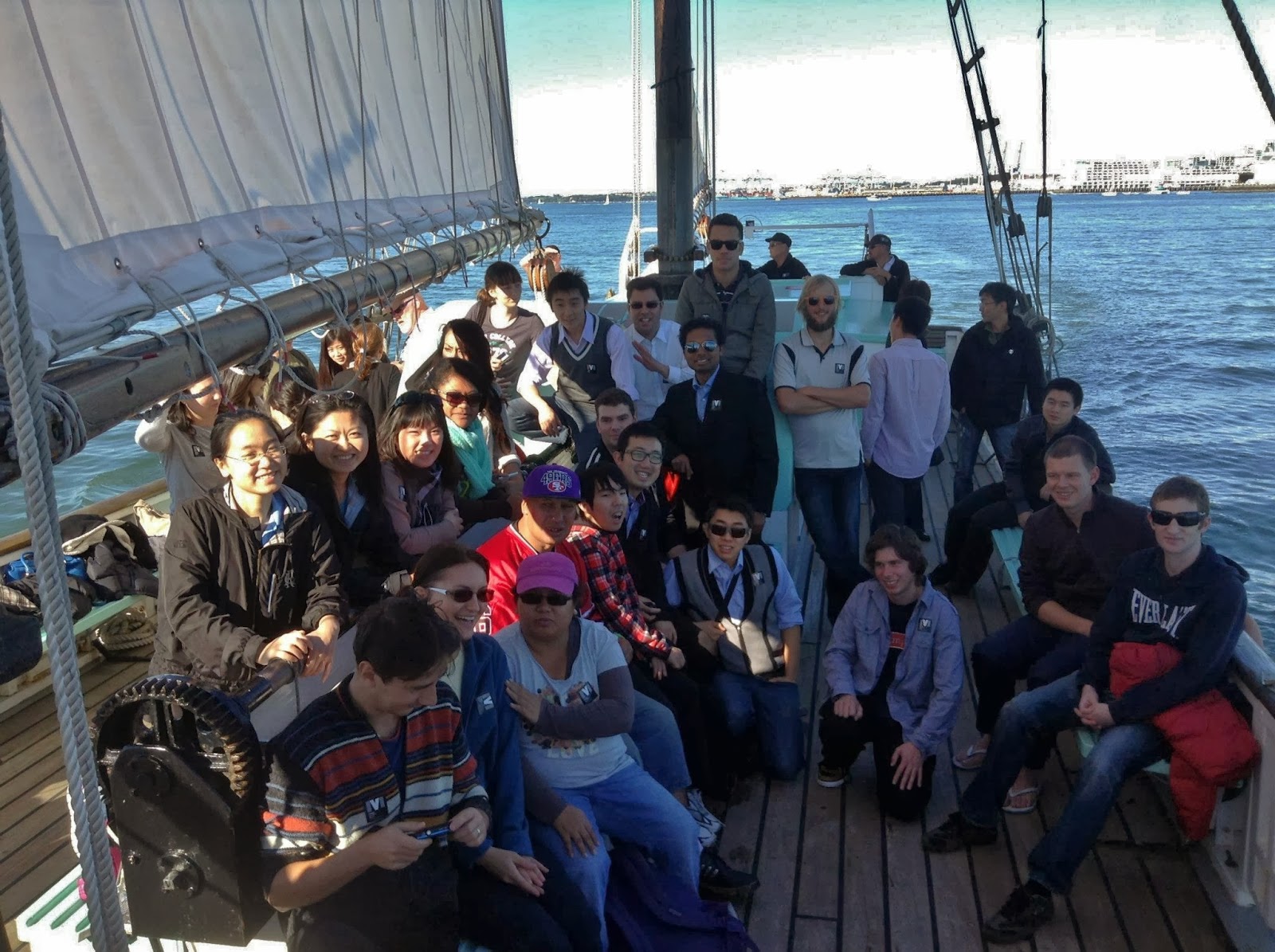 After returning we stopped in at the Maritime Museum then went to Mission Bay before having dinner and finally flying back to Wellington.

Posted by Travis at 12:57 PM No comments: Links to this post

On April 22nd James and I left for Whangerei in a hurry... it seems we were on a schedule. When we arrived on James' property in Helena Bay we set up camp, I set some traps, we moved the hose for the water supply up to our site and made a fire as best we could with the weathered wood.

The next day I caught a possum and we hiked to the top of the property and took in the view.

Later, the bulldozer arrived and we did some earthworks with that. 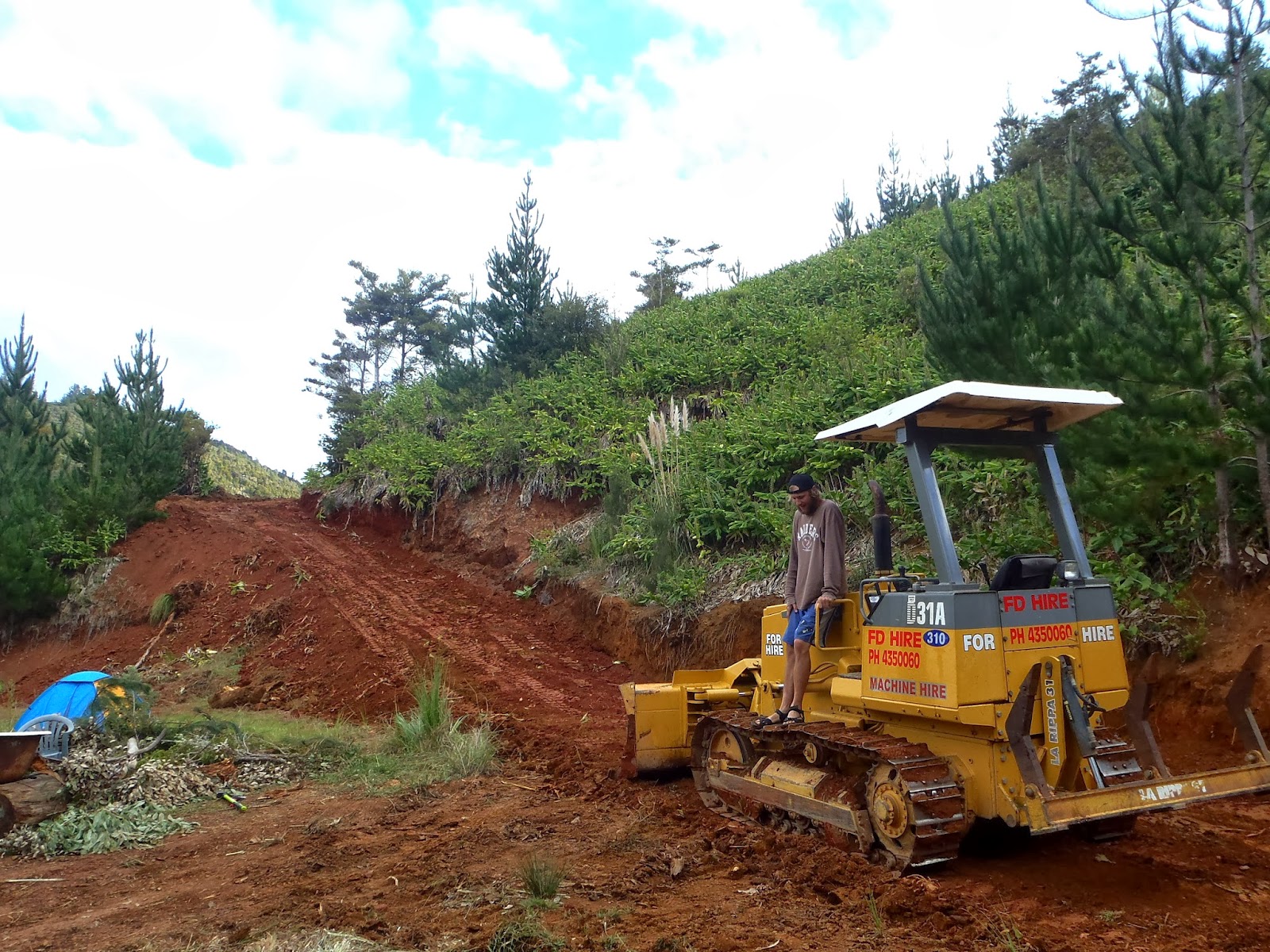 That evening we set up a tub that James had bought on the way up and lit a fire under it in order to have hot baths. This is apparently a very "kiwi" thing to do. On the 24th the neighbor Carl showed up and, to my dismay, took over with the dozer since he had previous professional experience. The next day I sprayed some weeds with a backpack that leaked chemical all over me. Fortunately we had the equivalent of a fire hose to spray me down with. Later I finally had a go at the bath for a bit of "bush luxury." 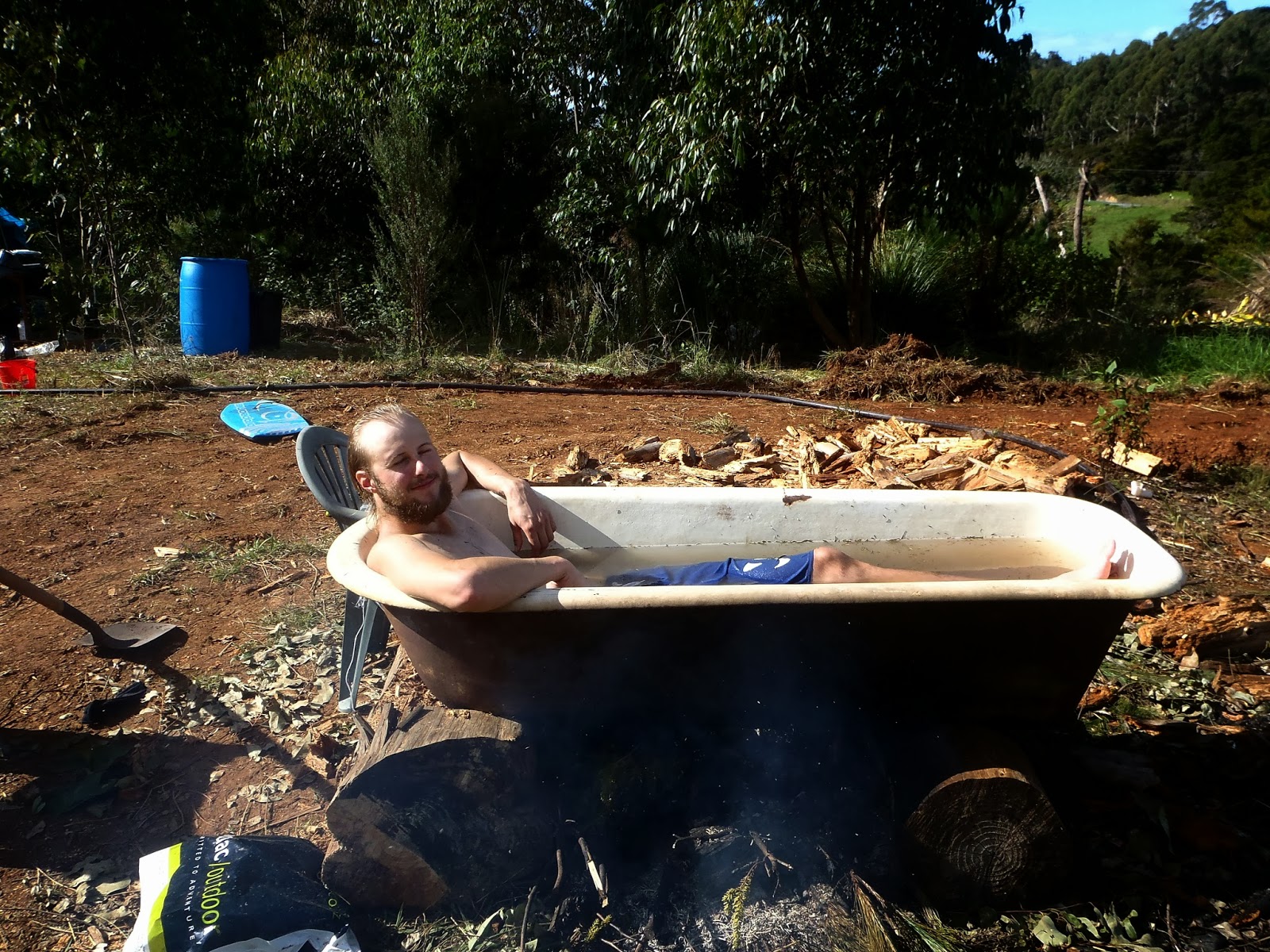 On the 26th James and I went to town to buy some kayaks and a $150 long line that James spotted in one of the stores. Out in the bay it proved to be a solid investment as we caught about 15 fish in 15 minutes! 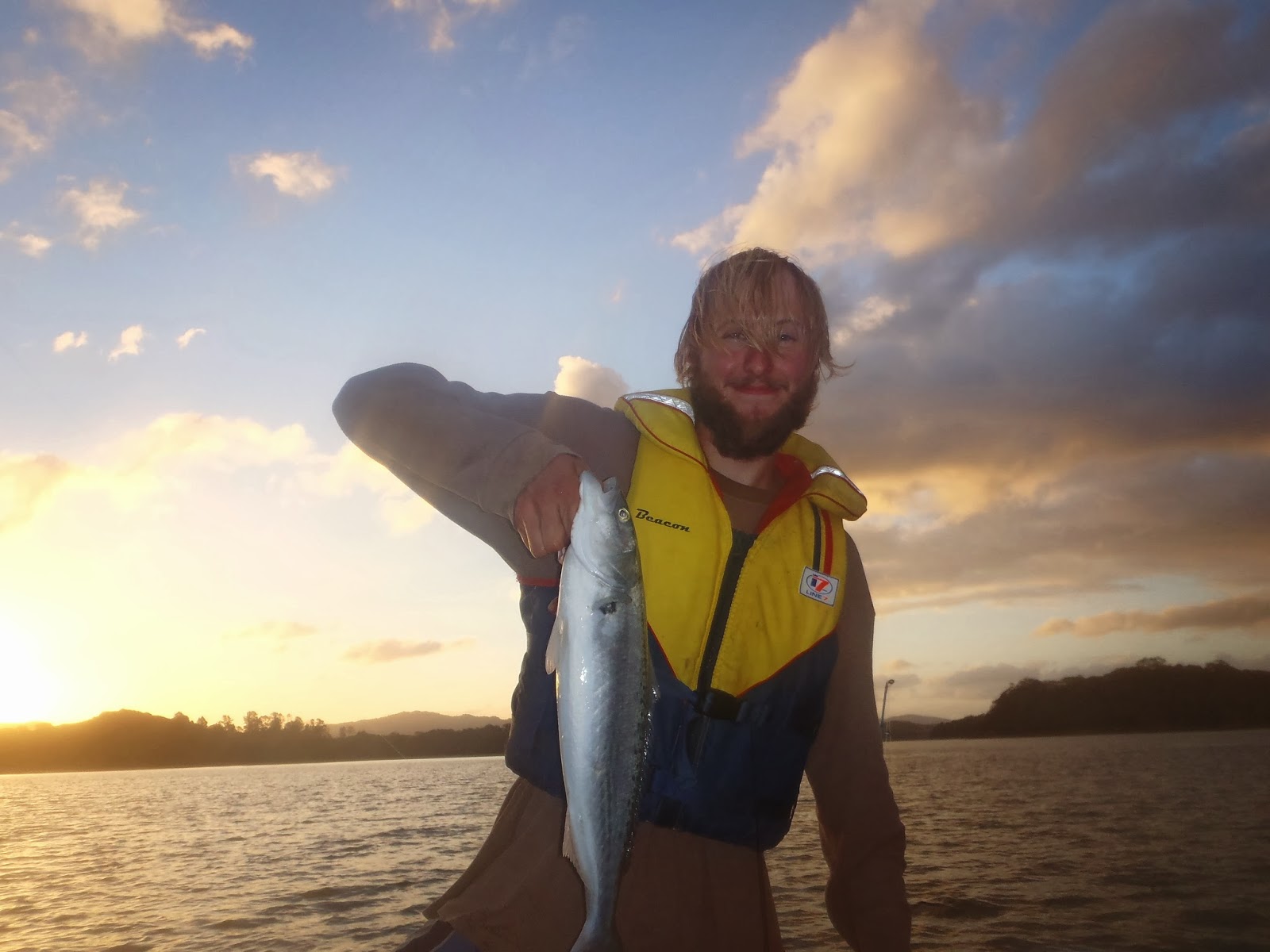 Back at camp James was preparing the fish while I went down to get the grill from the paddock where he had previously camped out. As I grabbed the grill I was charged at by some nearby cows.. didn't know cows were territorial. That evening we fried and smoked up some Kowhai and Snapper for dinner.

The next day we joined Carl and his friend Trevor for a fishing trip in his boat over in Oakara Bay. That night we had dinner at Carls. On the 28th we scouted an access road to the top and I did some dozing for a building platform.

Over the next couple days I did some dozing and James left for Hamilton to see his family. I continued dozing and trapping possums and ended up bribing the delivery guy to bring our hut project wood up our crazy road for $20. 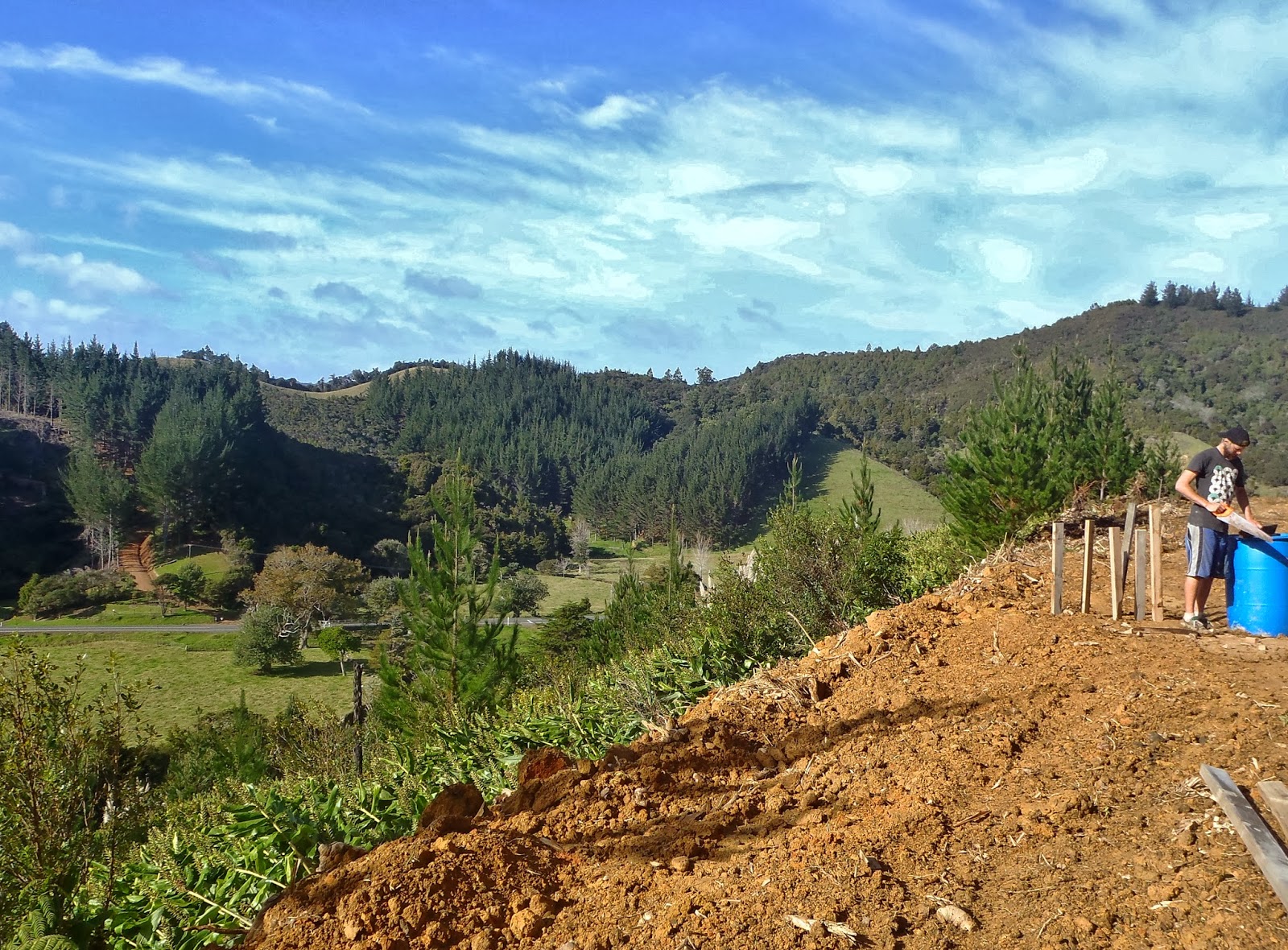 That day the dozer was picked up and I had myself a bit of a bonfire to celebrate.

On May 4th I kayaked down the stream to the bay as a storm hit. I kept at it as long as I could bare but, when the thunder and lightning started up, I decided to take a break. I stowed the kayak at someones holiday home and hiked back to camp. Later the weather cleared up a bit and I went back. The seas were a bit rough and a local passerby suggested I avoid it but I wasn't about to go all the way back without a bit of a paddle around. I managed to get the timing right between the waves and did some fishing before deciding I'd had enough - the swells were a good couple meters at least and one rogue wave almost capsized me. On the way back in I didn't time it quite right and my kayak got rolled in the waves but I had secured the pole so it didn't come off.

That night I awoke with pink eye from the stream water. I had seen it coming before so I grabbed my antibacterial soap, rubbing it around in my eyes, and went back to sleep. The next morning I woke up and the infection was gone.

On May 8th we packed up and stopped at Helena Bay to go fishing one last time.  Unfortunately some crazy guy started yelling and cursing at us because he figured a storm was a brewin. I told him that he would have had a heart attack had he seen what I did a couple days back. At that his blood vessel in his forehead just about popped and we decided to just head over to Oakara Bay. Ten kilometres later we fished for a few hours then returned to Helena Bay where the sun was shining and the sea was calm. 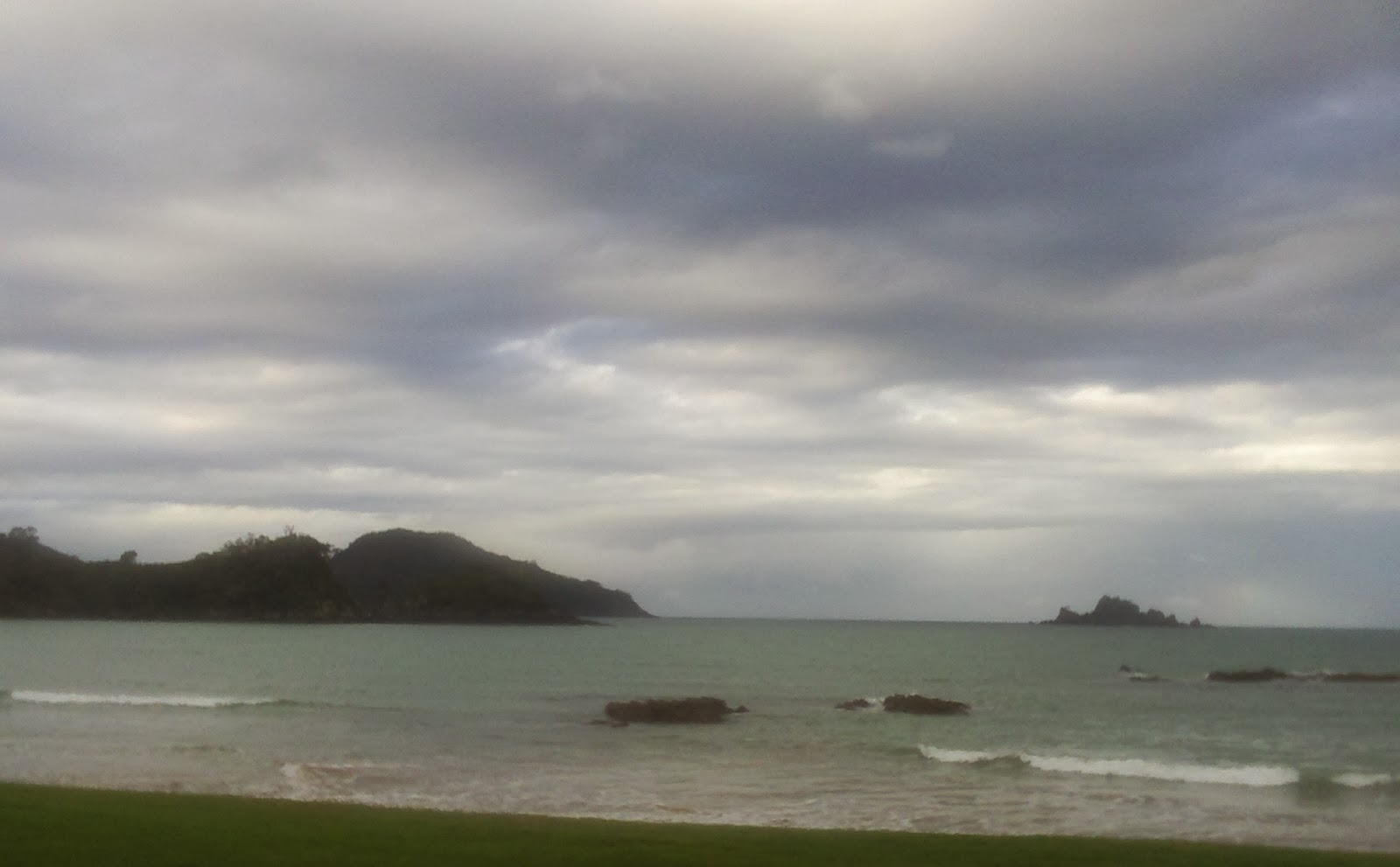 After that James dropped me off at Kevin and Mary Brown's in Auckland so I could meet up with the others from Wellington.

Posted by Travis at 8:23 PM No comments: Links to this post