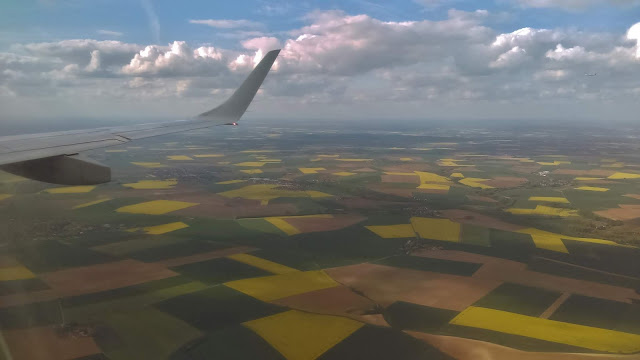 For the second time in my life (the first was in Hong Kong before I put everything into my first investment) I've actually got a healthy bank account to go along with my stable living situation. I always imagined that this situation would lead to more travel but, while I haven't stopped traveling, I find that my motivation to leave behind the hard-earned comforts decreases with every month of consistent stability. Part of me would love to just drop everything in order to get back on the road - hence the title "Fernweh" (German for "travel nostalgia") - but then I wouldn't be able to get that elusive long-term reward of being financially and legally free to move about Europe without a 90 day limit. I feel as if I'm pacing myself so that I can actually get there, but my fear is that I'll become too apathetic by then to actually get back into it... the struggle is real. I've finally reached a point where I can fully experience the "first-world" problem of having the means, yet not a lot of willpower. But then, I do have friends to motivate me.

On Sunday, March 25th, I went to the P1 Flomarkt - a flea market up by the airport. I've heard a lot about how great it is, so I've finally gone to have a look. I was pleased to see that it really was quite a large event with lots to do but, even so, I still prefer the one on the south side. That same day I received a visitor who would be staying for about a week. It's nice to be the one providing hospitality for a change. Then again, it was an extremely busy week, as I was teaching at the so-called "camps" eight hours a day on top of my normal schedule. The joy of working every minute of the day peaked on Friday when I left one of my students at the Airhop Trampoline Park... good ol' diffusion of responsibility it seems. Next time I won't be so careless as to trust that my coworkers are counting heads properly. After that I still had an afternoon of bowling with the teen group, but that was much more relaxing. Not only did it not require even half the energy of literally jumping around all morning at the trampoline park, but pizza was provided as well! I also had camps the following week, but that was much easier. Only four hours a day, and I didn't forget anybody at Airhop! 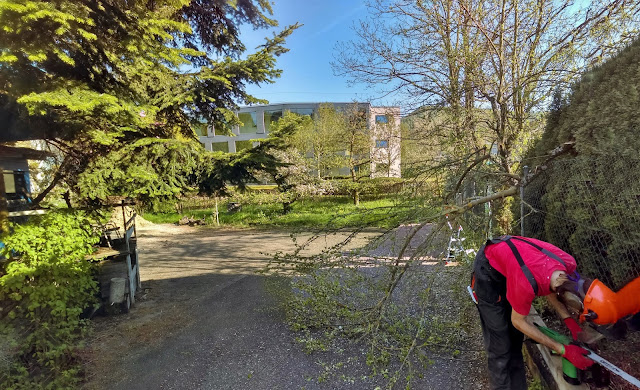 Another few weeks went by, during which I tried to buy my new scooter (I was turned down by my bank because I hadn't had my account for long enough to qualify for financing), after which I took a weekend trip to visit Stefan. On Friday, April 20th, I got up at 3am and, over the course of several hours, took a train from Düsseldorf to Cologne to Mannheim to Basel Bad. Stefan picked me up there after which we drove to a job to start installing an awning, then inquired about another job nearby, drove to East Switzerland for some yard work and, finally, returned to finish installing the awning. After all of that, we made our way into Southeastern France, arriving at about 1am. We then camped in hammocks in a forest over by a friend's place for the night.

The next day we got ready for a day of off-roading! We found access to some nearby mountain forests and started exploring. We had to drive over a lot of debris and, at one point, we even had to break out the big guns and saw a tree in half in order to continue down the path. Luckily, since Stefan is a "heimwerker" (handyman) of sorts, he had all the power tools you could possibly need for any such-type situation. It was snap. We made our way through more obstacles - nothing his Jeep couldn't handle - until we arrived at the other side. We started down a normal driveway-type road only to meet our fate there. Wouldn't you know it, after all the off-road threats were over, we popped a tire on a normal road. Some branch was sticking out slightly into the road at what must have been the perfect angle, because it stuck straight into the tire like a hot knife through butter. 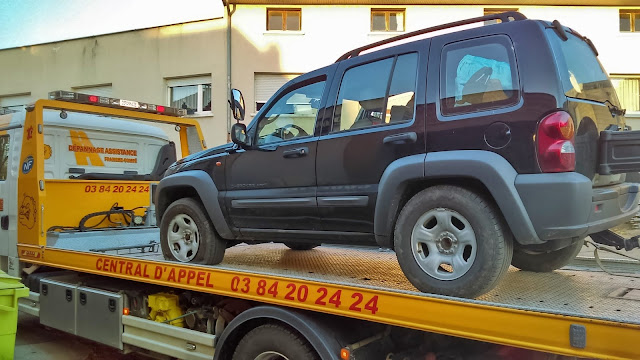 We ended up sitting around at the main road for a few hours before finally being rescued by the tow truck. It was a beautiful day, so we really didn't mind all that much. Of course, we had to be picked up in town by a friend and, because the Jeep was going to be a few days in the shop (Jeep tires are hard to come by in Europe), we would be without much in the way of reliable transportation for the rest of the visit.

Nevertheless, we managed the next day without four wheels. Actually, we had two each - our hosts had a couple mountain bikes for us to ride around. So, we took off looking for somewhere to swim. Our first stop was a stagnant pond by a house that looked like a murder scene... or abandoned at least. We rode on until we arrived at a small town on a river. After following the river a bit, we finally arrived at a swimming hole. The water was freezing, but we needed to cool off anyway. A bit further along we came to the dog show where Stefan's friends were, but we didn't see them, so we kept going till the next town. There we found a nice street market with lots of food and some random stuff. We got some waffles, had some ice cream, then decided to take a shortcut back through the woods. At first the path was quite nice, but then the trail started getting a bit rugged, before coming to an abrupt end. We rode between the trees for a bit but this became impossible as the forest floor turned to swamp. We then carried the bikes for a bit, hopping around to avoid patches of deep mud, until we reached a river. At this point we could see a clearing just beyond the trees, so we threw the bikes over the river, got a running start, and jumped across. 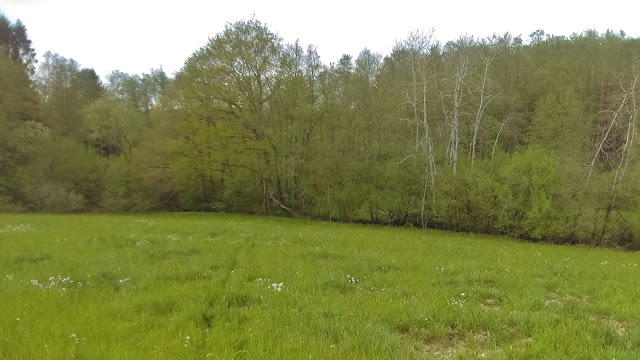 Finally, we were literally free and clear. We pushed across a field, rode along a dirt road and, finally, arrived back on normal streets. From there it was a short journey back to the house. That evening I got a ride to Reinfelder with some friends of Stefan's friends, took a train from there to Basel, Basel bad, then back to Düsseldorf. The next day I arrived at 7am, rode home and slept. 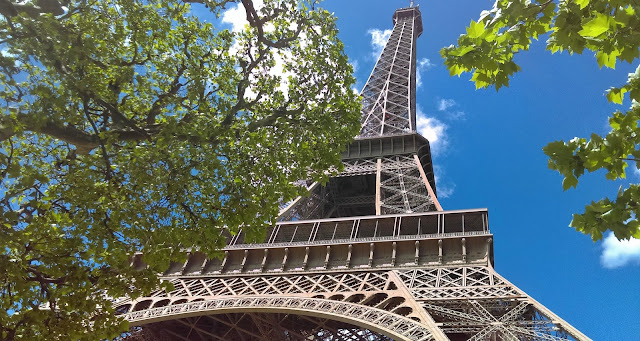 Three days later, I packed my bags and got on a plane to Paris. Garret had come to visit me just a month before; now I was on my way to return the favor. After I arrived, I started working my way across the city. My flight had been really late as it was (arrived at 7:10pm), but then I had to figure out how to get to the other side of a very large city where the public transportation is often shut down due to strikes - as was the case during my previous visit as well. I took a shuttle across the airport, got a train ticket (10 euros - machine only accepted coins!), got all the way across the city, managed to figure out my last leg, but then got stuck waiting for an hour for the last train due to, you guessed it, strikes. Thankfully, when it was all said and done, Garret had prepared some very nice steaks in his dorm in Jouy-en-Josas. 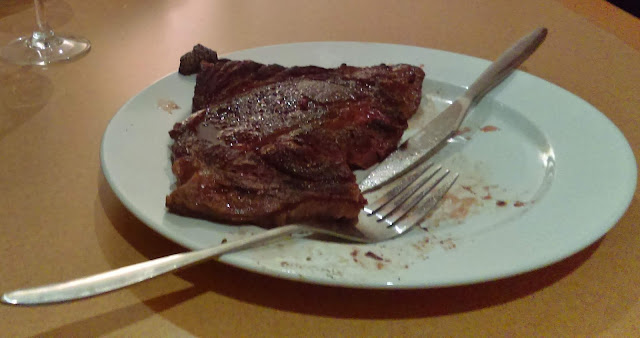 The next morning, Garret showed off his very fancy French press coffee machine. I usually don't drink coffee but, I've got to say, it wasn't bad! We also had some cured sausage and melt-in-your-mouth cheese. Garret really studies up on his French/European cuisine, so there was no questioning the quality of any of it. That day Garret was a bit busy with school stuff, so I went into Paris to do the tourist thing. I visited all of the things that I had certainly seen years before on a walking tour that I had taken (I literally wrote nothing about it back then, so it's hard to say!) - Notre Dame, Saint Chapelle and, of course, the Eifel Tower as well as the ever-impressive Arc de Triomph. I had been walking all day (along the river, through several neighborhoods, etc.) and was now in one of the most touristy areas. It was here that I decided to put to use one of the more useful backpacking tricks - I wandered down a random allee until I found a tiny shop with no attractive qualities and, from there, I was able to buy things at normal prices. I had already checked a few shops in the touristy area in order to find a cable to charge my dying phone/guide, but they all wanted 15 euros for what, in the end, only cost me about 3... 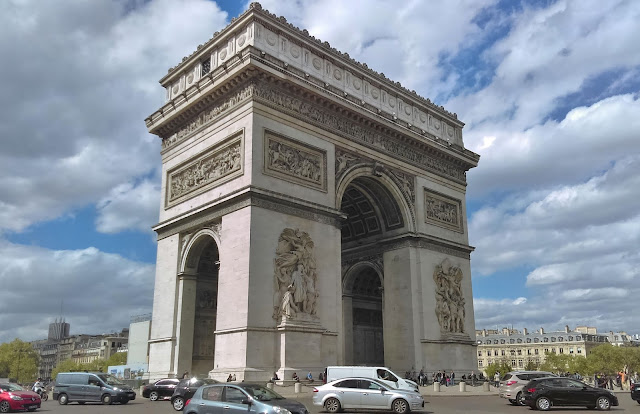 Finally, I charged my phone at a McDonalds while I waited for Garret to arrive. We went for a walk through a cool neighborhood that had lots of neat little shops with super-overpriced treats, then got dinner at an Indian restaurant that some fellow students had recommended to him. After that we took the train back to Jouy for the night.

The next day we rented a car, stopped at his local bakery for breakfast, and drove to Chartres. I had studied the cathedral there back in the day, so I had some expectations for this place. Well, I was not disappointed. The cathedral was more massive than I had ever imagined. I probably had to take a dozen photos and stitch them together in order to get the whole thing: 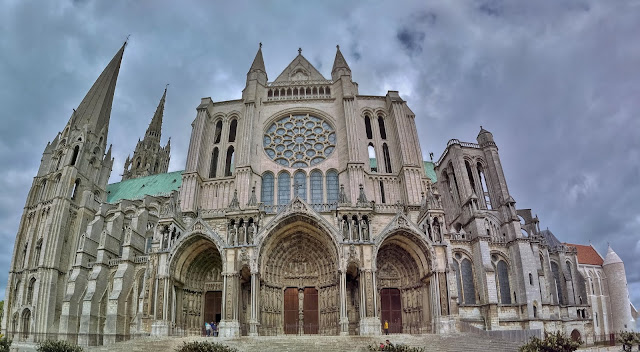 We walked around Chartres and ate at a super old-looking Creperie called Crêperie Les Trois Lys - seriously could have been from the 16th century! We then drove over to Château de Maintenon - a château, originally a castle, with huge gardens, super ornate interior, and a really cool aqueduct. 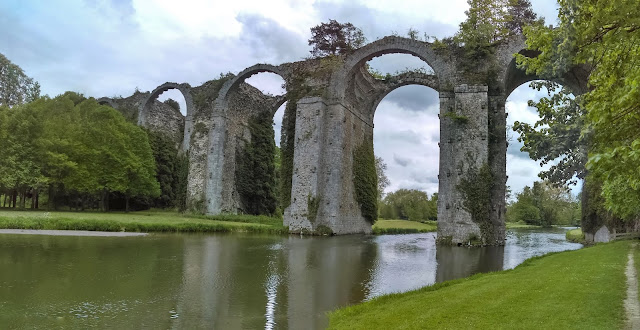 After all of that, we were ready to finally head back. We stopped at a few different shops, including a really old-school-looking farm organics store with all of the local produce you could ask for, and picked up some French white sausage for dinner.

We had lunch in Paris the next day on the way to the airport then I struggled alongside fellow train people trying to figure out what train would actually get us to the airport on time... despite the lingering limitations caused by the strike!

Well, I guess, with a little help from my friends, I've managed to get back out and do a bit more traveling after all. Hopefully they can convince me to do it all again soon!