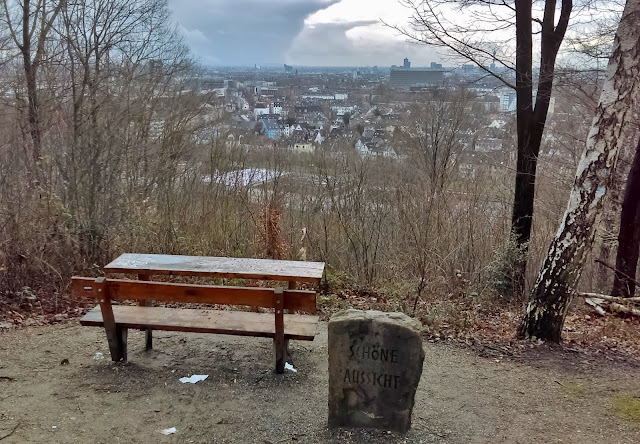 No matter where you are, the daily grind can really get to you. This is most certainly compounded by cold weather. I find that the dream of living abroad is only as good as the location you choose. Düsseldorf has been nice up till now, but the cold weather really takes its toll - especially when you're huffin' 'n' puffin' to get everywhere. Over the last few months this has gone from an excellent form of exercise to a rather unhealthy strain on my body. For one thing, while bicycles are supposed to be easy on the joints, my knees have been giving me serious problems. I've gotten to the point of wearing braces on both knees. Furthermore, the cold weather just makes everything feel like a constant battle for survival. It's no surprise that people start getting the frühjahrsmüdigkeit (early year tiredness/depression) real bad this time of year.

On Saturday, the 10th of February, my travel buddy Stefan arrived for a visit. Having a visitor definitely helps to break the mundane day-to-day routine. I met him at the Hauptbahnhof (main train station) at about 6am, after which we started right into a tour of the city. First stop: Trödelmarkt (flea market). 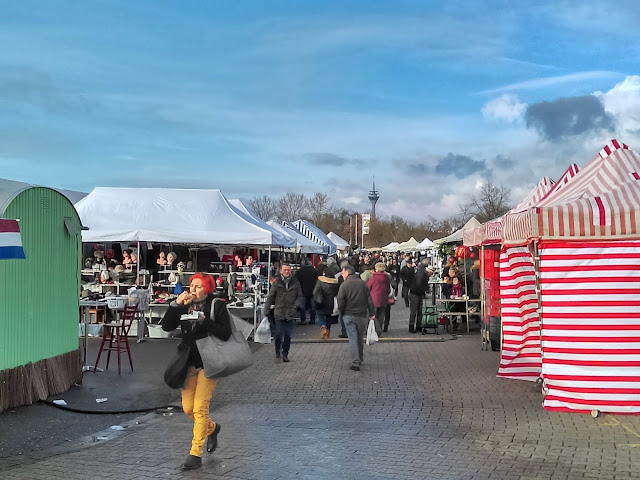 We then rode along the Rhine River, through the Altstadt (the old city), and back to my place. It was noon by the time Stefan finally put his stuff down. I pumped up my little inflatable raft so he could take a rest for a bit before our ride up to Angermund for the home meeting.

The next day, after the table meeting, we passed through the crazy festivities of Karneval on our way up into the hills. Stefan is a big fan of riding bikes on hilly surfaces, so this was the next logical place to visit. We found our way up to the top of the only hills in Düsseldorf where we stopped to visit the Wildlife Park. 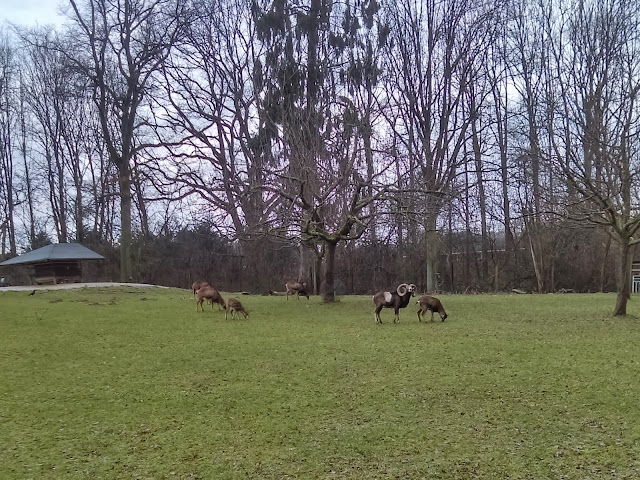 It being a free Wildlife Park, there wasn't a whole lot to see, but it was definitely worth the visit. We then rode through the forest on our way to Spieleabend (game night). We followed a long path which wound through the hills for a good hour or so before ending abruptly in the middle of the city. From there it was a relatively easy ride to the meeting. Later that night I went back to the Hauptbahnhof  with Stefan so he could catch his train back to Switzerland. About three weeks later I went back to the Hauptbahnhof to meet up with my next visitor - Garret. 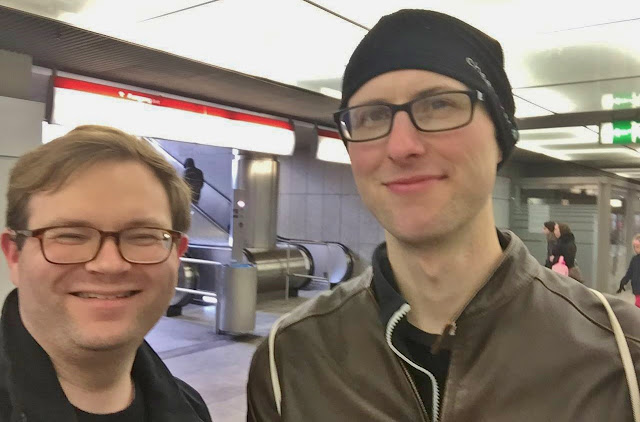 Garret and I met about eight years ago in Paris. Up till a few months back he'd been working on getting back to France for what would be a more long-term visit. Garret has ancestry in Luxembourg so, after a very long and bureaucratic application process, he finally managed to get citizenship. With that, it was only a matter of tying up some loose ends back in the states before he was able to, at long last, achieve his dream of moving to Europe. Garret arrived in France just a month after I had also arrived back in Europe. Since his new home was so close to mine, we decided it was about time for a bit of catching up.

After stopping back at my place for breakfast, Garret and I started our walk around town. Unlike Stefan, Garret is a bit more interested in the local culture. So, we went to the local shops to get some German chocolates and other food. Then, after dropping that off at my place, we went into the city to meet my friend Tarek from Köln (Cologne). We had a good lunch followed by some Chococoffee and cheesecake. Finally, after a walk along the Köh (a famous shopping street in the city center), Tarek hopped back on the train home, and Garret and I went back to do some cooking. 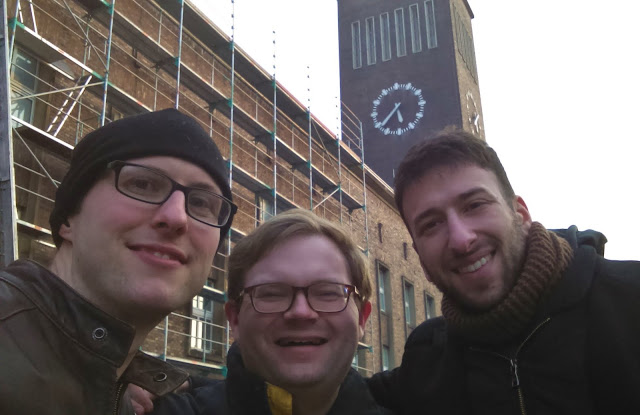 The next day we went to the table meeting, had lunch with some of the others from the church, and tried some Leberkäse at the Hauptbahnhof. Finally, it was time to say goodbye, so Garret caught his train heading back to Paris.

Over the next week I finally got my visa, opened a bank account, and started shopping for a scooter. It was time to start moving up in life! Unfortunately, my timing could have been a little better. With the cold weather I was convinced by Peter to ride the train to one of the meetings one night... I hate taking the local trains. They're overpriced and, more often than not, they don't really save me any time. Sometimes they even take longer than just riding the bike because of the waiting times. But, I thought it'd be nice to accompany Peter just this once since, you know, it's just like five euros, right? Wrong. After waiting over a half hour, we finally boarded the train only to be kicked off after a couple of stops - we hadn't bought a zusatzticket (extra ticket) for our bikes! A zusatzticket is a full-priced ticket that you have to buy for your bicycle as if it's another person or something. But, at the time, I didn't really know that was necessary. So, we got two more tickets and waited for the next train to come... thirty minutes later. By this time we were cold, hungry and demotivated, but we took the train the rest of the way to Angermund. Then we started riding to the meeting only to realize, after about a kilometer in the freezing cold wind, that we were going the wrong direction. So, it took another 20 minutes or so, but we finally made it to the meeting. 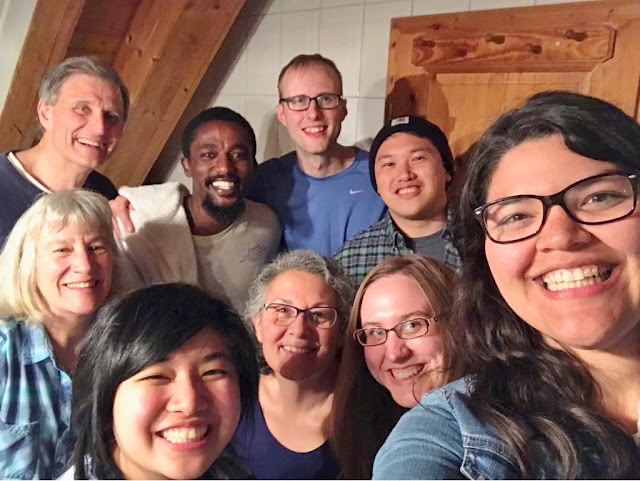 After dinner we thought the worst must be over now. Wrong again. We checked our tickets and, upon realizing that we hadn't validated them, got to thinking that we could validate them at the station and use them to get home. The problem is that, while some tickets require validation in a ticket machine, others don't. The whole train system is like this - some places have machines in the trains, some have ticket checkers who can sell you tickets, and yet others require that you buy your tickets and even validate them before boarding. The inconsistency is a well-known problem here; one that frustrates many people. Well, it was just our luck... our tickets were the ones that you don't have to validate at all. This meant that they were no longer valid since we had purchased them for another trip. So, after we boarded, and put our bikes aside, the ticket controllers came over, looked at our tickets, and then proceeded to treat us like a couple of Schwarzfahrer (fare dodgers). Note: Germans don't like it when you break the rules. They wrote us up for 60 euro fines and then, when our stop came, refused to let us off the train (an illegal form of detention if I'm not mistaken!). They insisted that we wait a couple more stops which, as I tried desperately to explain, would only make our journeys home very long as we had no more Bargeld (cash) for buying more tickets. In other words, we needed to ride home in the middle of a very cold night. Nevertheless, they were set on making us regret our mistake, so my ride home went from a 10 minutes to about 30. Not cool.

The fun continued as I tried to pay the ticket to DB (DB in this case was Deutsche Bank, not Deutsche Bahn), ended up paying double (which took well over a month to be refunded) and, after a month, still had to rely on my bicycle to get everywhere because my bank wouldn't allow me to finance the scooter. I had been in such a hurry to finish paying off my property back in the states, that I hadn't left enough money in my account for the scooter. At least there's one upside there - my property is finally paid off!