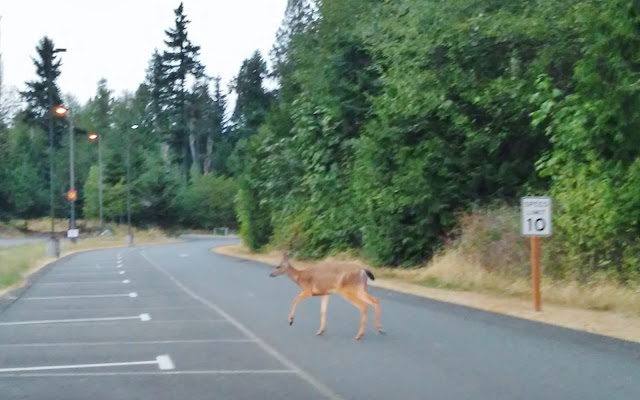 On Monday, the 10th of August, I went wakeboarding with my dad and my brother, Sam. Later, Sam and I went to Ellensburg to check out his bike and see if I might want to buy it. Unfortunately, his bike wasn't even in good enough shape to get back to Puyallup, so I had to borrow his car. The next day I went back to my job at Pierce College in Puyallup (the same security job I left a few years back when I went to Australia). It's a really great job with awesome people, a flexible work schedule and good wildlife spotting opportunities as you can see above. So yeah, I was definitely happy to be back. Over the next few weeks I spent a fair amount of my time working at the school and for my neighbors, the Stampers while also house sitting for some other friends. I figure I was making pretty good use of my time. I also managed to finally sort out a motorcycle at the end of my first month back home. 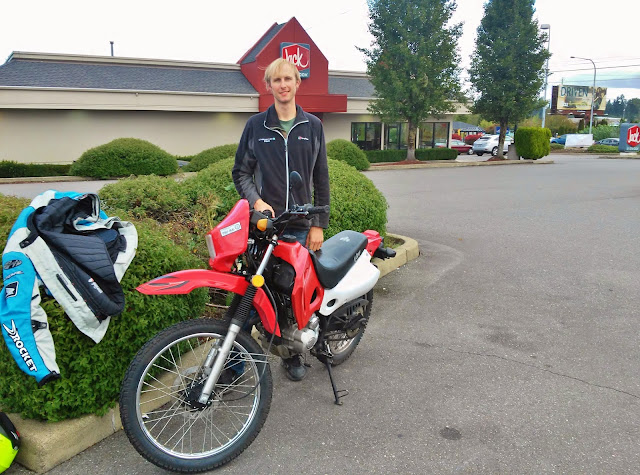 The bike is almost exactly like the second one I bought in New Zealand - simple, small 250cc, dual purpose (enduro) and.., Chinese. Unfortunately, as I found out, American mechanics are extremely reluctant to go near these bikes and, as expected, I needed some work done. Well, my dad was able to fix the main problems so that the bike would last through summer but, after that, the safety of the bike would become a concern.

After I bought the bike I went to get it registered in Parkland... where I saw the first of two people that month that I would see running around naked. The other would be at the school and both were in broad daylight... the cops and I had no luck finding the second guy, but I'm not sure I'm really so disappointed about that. 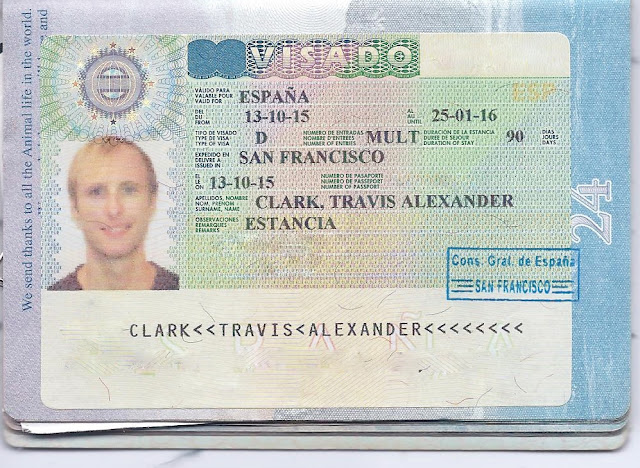 Overall, the main reoccurring theme this month was in relation to my visa for Spain. I must have sent about a million emails to people at the Spanish consulate and the police headquarters in Hong Kong about my background check there. First, Hong Kong demanded a letter from my employer (the Spanish government) stating that the background check was necessary, but the Spanish government just told me to send the Hong Kong police to the program website - which states that I need a background check from every country I've lived in over the last five years (for me that's Australia, New Zealand, Hong Kong and America). Of course, Hong Kong didn't like that idea, so I forwarded this to the Spanish consulate who finally agreed to provide the letter. This all took about a month but, of course, it wasn't enough... The Hong Kong government then wanted written authorization from me in order to use MY fingerprints (ATTACHED to my application) in MY background check...

Confused yet? It gets better. They only accept snail mail (no emailed scans or faxes) which, considering that this is China we're talking about, takes over a week to be delivered. Furthermore, after they finally received everything (listed here: Certificate of No Criminal Record) they still needed about a week to process my payment (which cost me double the amount just to convert and send it in their currency - no online payments or USD accepted) and they needed another week after that to process my background check. Only then (in October), after I was already late for my program, did they finally send the background check to, not me (because they don't trust the certificate in the hands of the subject of the background check), but rather the Spanish consulate who then had to combine the background check with my visa application even though the background check was technically required to be submitted WITH said visa application... ya esta!

Aside from all of that insanity, I also had to make several trips back and forth to Olympia during this time in order to get my American background checks sorted which, fortunately, no longer included the FBI check as neither government could seem to get their act together in a reasonable amount of time. I'm pretty sure that any normal person would have just called this whole thing a miss but, what can I say? I guess I'm just a glutton for punishment!

Wow, still reading? Good on ya. Here's a video of bunnies that I took while I was at work...

Posted by Travis at 1:52 PM No comments: