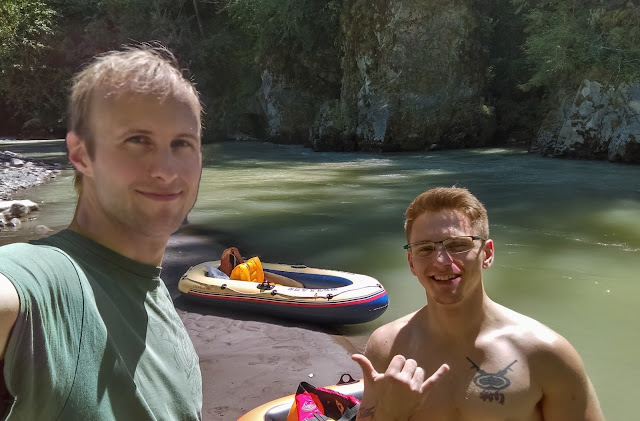 Ever since I first went rafting on the Puyallup with Chu Sum back in November, I've considered it as the hidden gem in my home town. I say "hidden" because I don't know anybody who's actually spent any time there. In fact, after all my years living in Puyallup, I only recently had the idea to go have a look. As it turns out, the Puyallup river has several sections where one can take on rapids of varying difficulty. With Chu Sum we had taken on the lower level which had only a few easy rapids, and not so many obstacles. With Austen, on the other hand, we didn't have that choice. Unfortunately, the section of the river that I was familiar with was not running at a safe level, so we had to go to a different section where the difficulty was a bit higher. Austen and I didn't see any reason why a little extra challenge would be a problem, so we went for it. 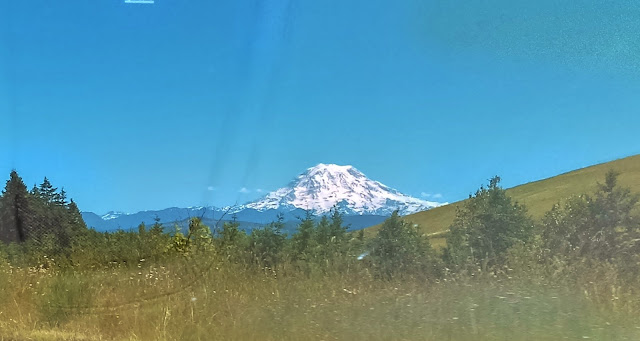 On Thursday, June 22nd, we met for lunch down by Graham before parking our cars - one at the planned exit point and one at launch point. We then pulled out my rafts. I had bought an extra one so that friends could come rafting without us having to all cram into one boat. I had found a good deal on one on the Walmart website for just 15 bucks. As we inflated the rafts, the reason for the low price became clear... The new raft was not only small but, as we would later discover, quite thin. Still, the level we were rafting was apparently not that much different than the one I had done before, so we had no reason to expect any problems. It also didn't hurt that we were both trained lifeguards with considerable swimming experience. 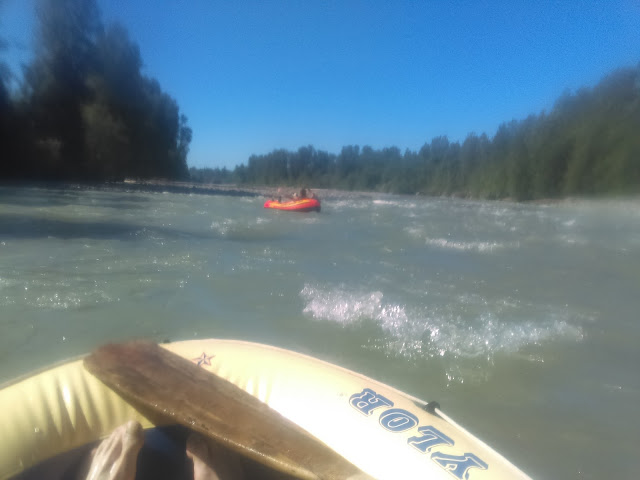 It started out really well. We were both cruising for probably an hour without any problems whatsoever. We hit a few rapids, and had to navigate around a couple of funny obstacles, but overall it was a beautiful day to be on the river. I had taken the older raft because I was taller and Austen had volunteered to take the smaller, newer one. This, of course, didn't end well for him. At one point, he got hung up on a branch which, after he grabbed onto my raft, resulted in us both getting pulled under the rapids. He couldn't quite get himself up far enough to free the rope so, as I recall, I ended up having to pull us both up so that we could get the rope loose. This was perhaps a bit of a close call, but we managed to get free and continue our journey down the river. 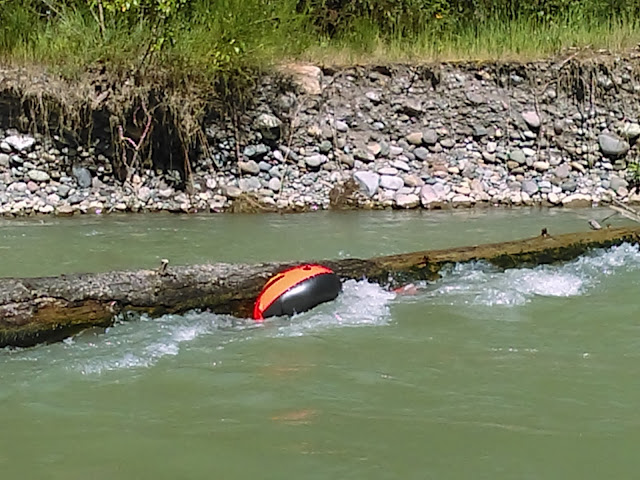 At another point, there was a tree blocking about half of the river. We both noticed it a bit late and weren't able to paddle around it in time. Austen was a bit further in where it was harder to get out and around. This was also the place with the most pointy parts... After I hit, we were both laughing, as he was presumably about to get stuck on the log as well, but then it happened... he disappeared. It actually took me a moment to realize that he was gone. It had looked like his raft was just folding a bit but then, suddenly, he went under. 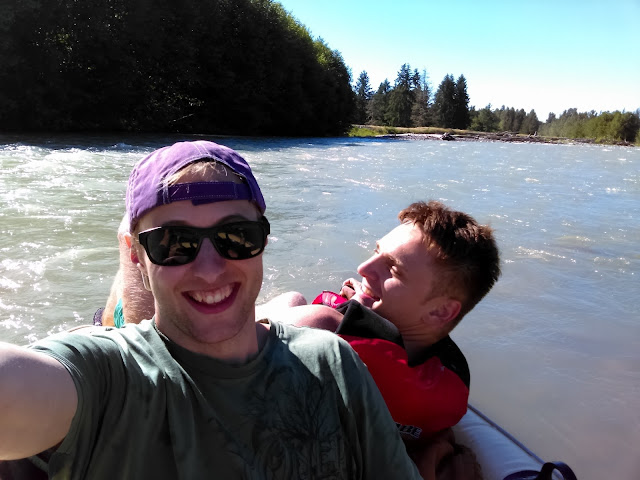 It took a good five seconds or so, but Austen finally resurfaced about four feet down on the fallen tree. Holding on for dear life, he waited while I pulled myself over to him so that he could climb into my boat. I'm not sure if the life jacket was more helpful or detrimental for him - I think it was probably pulling him more up against the tree than out from under it. In any case, I was thankful that we were prepared enough to deal with the situation. While taking a short break, we confirmed that Austen was a little scratched up but, otherwise, none the worse for wear. We then continued down the river for the next few hours without further consequence. 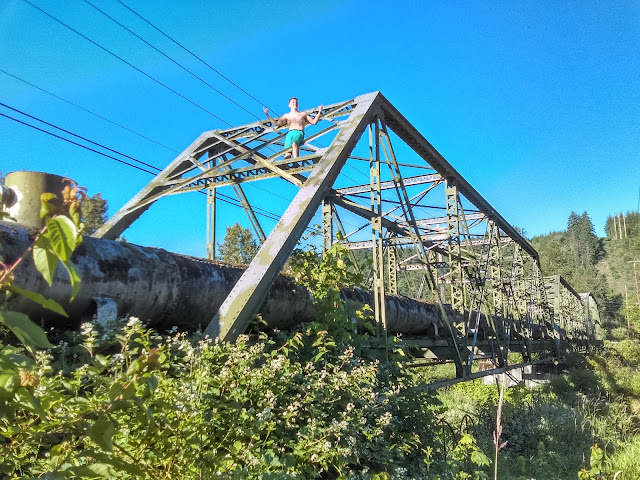 Despite his brief moment of uncertainty, Austen was his usual lively self. At the end of our journey, we came to an old pipe bridge. After loading up the rafts, we climbed up on the bridge and had one last look over the river. All in all, it had been a pretty cool experience. Next time I'll just be a little more careful in selecting my equipment!

After returning from my last trip, I went back to working nights at the college, and days at my neighbors'. I spent time with friends and family, worked on my property, taught another friend how to ride the motorbike... and worked some more. I was quite busy, so the last thing I wanted was drama from my renter(s).


On Monday, June 5th, I went over to my dad's. Over the next couple of days I made my usual effort to clean up around my property - did some weeding, painting, caulking, and put in a new screen so that my renters could let fresh air in... Four days later, the emails began.

It had been a rough year with the rental. They had only paid on time once or twice, and the other payments were usually in the neighborhood of 2-3 weeks late. I was hoping this was just part of their flaky behavior that I had come to expect but, unfortunately, it was a prelude to what my mom likes to call The Renter Games. I hadn't expected that I could be so fortunate (sarcasm) but, as it turned out, I had myself some of those professional renters - the ones that like to take advantage of the renter-friendly laws in Washington State.

Things escalated pretty fast. First, they complained that I wasn't doing enough for them. Then they started messing with the neighbors - letting their dog poo on the neighbors' lawns, making huge garbage fires, and just being antisocial in general. Finally, I guess they were feeling pretty bold, because they started making excuses for not having paid the rent... by claiming that it wasn't their fault. Of course, I say "they" because my renter's boyfriend had moved in (a while back to be fair) and was now looking to take control of the situation. They decided that my attempts at communicating with the woman needed to stop - not that I had been having much luck with that in the first place. So, the boyfriend requested that I communicate only with him. I figured, "why not?"

Well, he was definitely better at responding to my messages. The only problem was that he responded with claims of being abused by me. I made an improvement to MY shed; he complained that it wasn't good enough. I asked for rent to be deposited; he complained that going into banks made his girlfriend nervous. I asked them to pay or quit; he threatened to drag it out for months without paying (technically possible if I wasn't willing to hire an expensive attorney). Finally, a week into it, I went to drop off the eviction notice. While I was there they put on a big show with firemen and police while filming and yelling that nothing there belonged to me. I gave them until the 30th. Surprisingly, they agreed to leave... on the 30th... at 11:59pm. This was technically a big win for me. If they had fought harder it would cost me more than just a months rent.

Nevertheless, we kept at it. After they removed their stuff from my shed, we spent a day cleaning up their remaining garbage, cigarette butts, residue, etc., and then re-keyed the shed. At this point, they thought it would be fun to leave their semi-truck on my property so that my new renter couldn't move on. So, we sent an email to the truck company saying that it was abandoned on my land - the truck was gone the next morning. Finally, the renters from hell had gone off to torture some other poor landowner. I hope he's more prepared than I was.