Good evening, Vietnam! On Wednesday, May 17th, I arrived in Vietnam where I began my search for a functioning ATM. After ordering a GrabTaxi (similar to Uber), I went to the first ATM I could find at the airport only to find that it was not even plugged in. When the GrabTaxi arrived, I explained my situation and asked to stop at an ATM on the way to my hotel. The driver seemed to be okay with this idea... unfortunately, this was because he didn't understand. As we approached the hotel, I found myself awkwardly explaining why I didn't have money for him. Eventually, I found that pronouncing ATM with Latin pronunciation (Ah-Tay-Em) got my message across - this actually makes sense because of the French colonial influence in Vietnam. So, we found an ATM... but this one didn't accept cards with the security chip. Who knew that more security could be the cause of the problem? Visibly exasperated, the driver took me to another ATM where I had to wait in a line. When I finally got to the front, I found that this one was not working very well either. Fortunately, it was just a matter of mashing the buttons really hard. 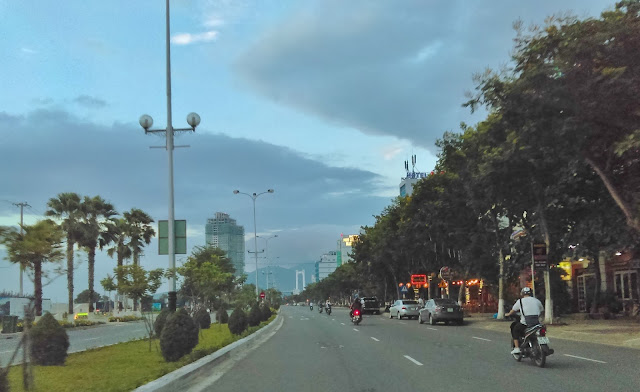 Back at the hotel, I gave the driver twice the fare - $10. This would have been reasonable even if he hadn't driven me across town. The bargains didn't stop there - my $10 room had air conditioning, queen-size bed and a balcony! I would later discover that this was just the beginning of my budgeting dream come true.

Later that evening I took a GrabTaxi to a friend's place across town where I met with some fellowship contacts. Quang is a local in Da Nang and Chas comes from LA. We spent some time talking, reading, and eating some interesting local snacks, then I headed back to my hotel for the night. 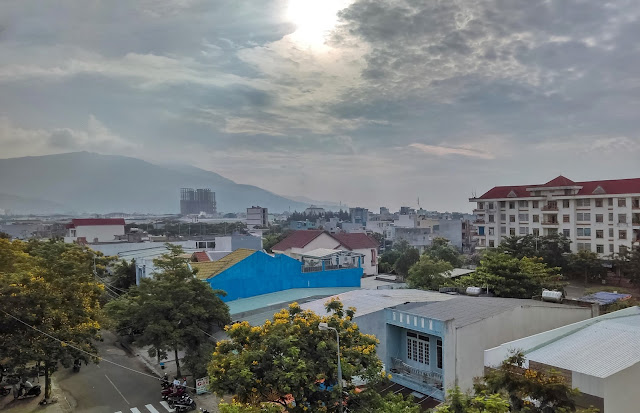 The next day I found my next bargain - a scooter rental for $5/day! And here I thought the GrabTaxi couldn't be beat. I then began my journey down the coast on my way to Hoi An. My first stop along the way was a gas station. I think that was about $3 to fill up... and they even do it for you. As I was continuing down the coast, I came across Marble Mountain. This was actually one of the stops on my itinerary, but planned for another day. Nevertheless, I ended up making an unplanned stop. As I was riding along, another scooter pulled up next to mine and its' driver decided to start a conversation with me! The lady on the other bike asked me if I'd been to Marble Mountain and, when I told her that I had plans to see it, she insisted on showing me where to go. 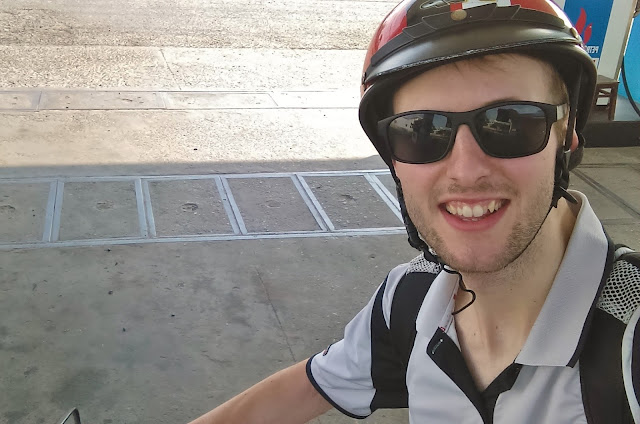 I followed this lady up to her shop and we parked there. She then gave me a ride to the entrance at which point I explained that I was actually planning to come back with friends on another day. So, she took me back to the shop and started her pitch. Well, in retrospect, her pitch started back on the main road. This was all an elaborate scheme to get customers into her store and price gouge them. Feeling guilty that I had wasted so much of her time, I offered to buy a couple little items. I assumed that the prices would be Vietnamese prices... naturally, I was wrong. I chose a few small marble figures thinking that it would be no more than a couple bucks. She then went on to quote me over $100! Well, I had already agreed to buy something so I offered to buy one cheap one. She went on with all of the funny lines, like "you're on holiday - live a little!" or something like that. She clearly had assumed I was one of the average tourists with a bit of extra cash. Well, after repeatedly assuring her that I was not, she agreed to let a small figurine and a bracelet go for $25 USD... you can imagine my sense of buyer's regret after I left that place. Even after talking her down to a fraction of what she was asking, I had still gotten completely and utterly ripped off. I would later see these same items on the street for spare change. 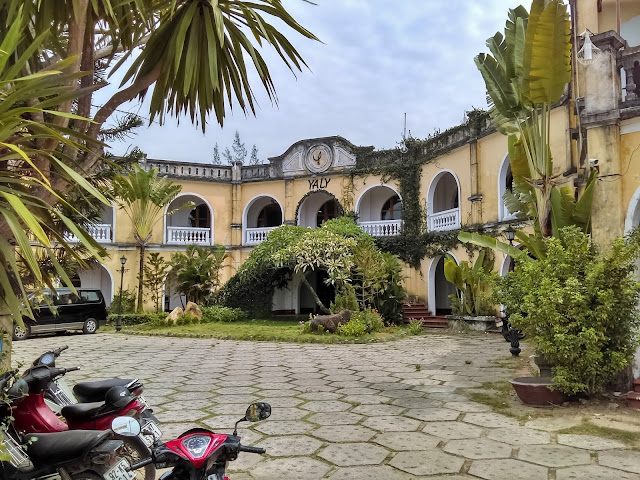 Oh well! I continued my ride down the beautiful coastal road to Hoi An - a traditional Vietnamese village packed with tailors. I had taken the advice of a guy I met while wandering around on Hong Kong Island a few days before, and plotted my route to a place called Yaly Couture. Apparently, this place uses state-of-the-art technology to produce super high-quality suits at unbeatable prices. I later found out that, not only did the store I went to not use the high tech computer scanning tech, but that they actually give a pretty average rate for that part of the world. A few months later I would learn of $50 suits in Thailand - 1/3 of what I paid! In any case, I got measured twice that day and had a pretty darn nice suit delivered to my hotel that evening. 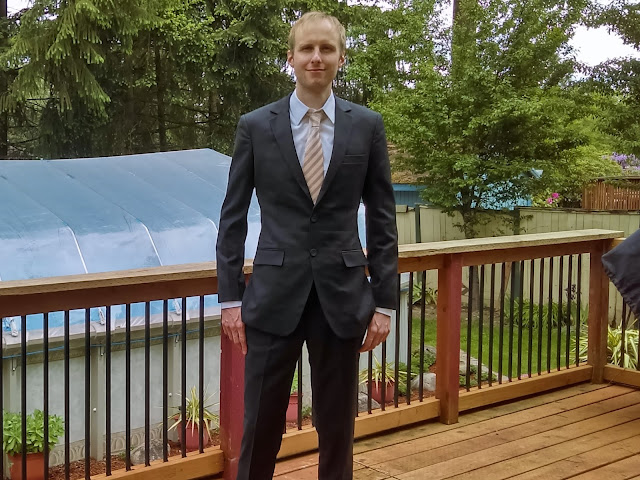 Meanwhile, I went to lunch and practiced my Vietnamese with a local named Vinny... Actually, his name was Vĩnh Trần, but I suggested what I thought was a fitting English name and he seem to like it. So, after I got to know Vinny over lunch, he offered to show me around his village. He had to work for a few hours though, so I went for a message at a place recommended by my hostel, called Su Bi. It was actually a lot different than previous messages I'd had. It started out with a tea based foot soak during which they gave me some really tasty sweet coconut to eat - this indeed was quite good, especially when you consider that I usually hate coconut! After that we went upstairs for a really nice full body message. I was surprised there as well because I usually don't enjoy the whole message - it's usually a bit too aggressive. At one point the lady was doing something that made a clacking sound as it hit my back. It was nice but I honestly couldn't tell you what the heck it was. Overall, my hour message was a pretty good deal at $10 (about 230,000 Vietnamese Dong). 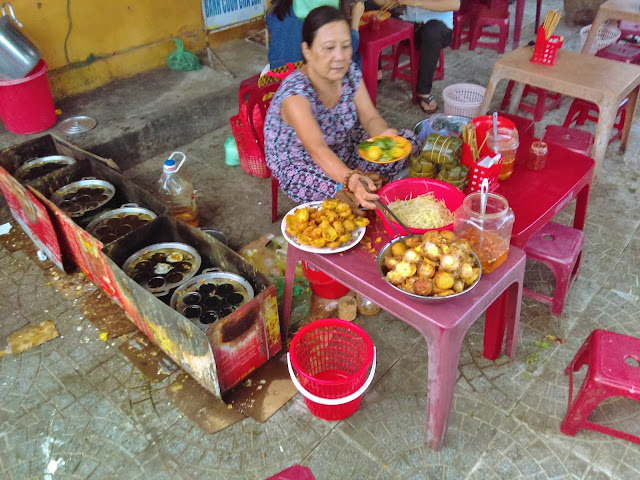 Later on I met up with Vinny for some really awesome local Vietnamese food. First he took me for some street food (only like $1 - 20k VND) followed by a restaurant where I got clay pot steamed rice with chicken and a drink for probably about $2. Finally, we headed over to the street market to see the famous Hoi An lights, more street food (including the most delicious lemonade-type drink I've ever had), and souvenirs - which some guy promptly tried to steal from me as we were walking through a crowd. The cheeky little sneak tried to grab my stuff right out of my bag that was in my hand! You can imagine how shocked he was when he realized I was actually paying attention. Off he ran. 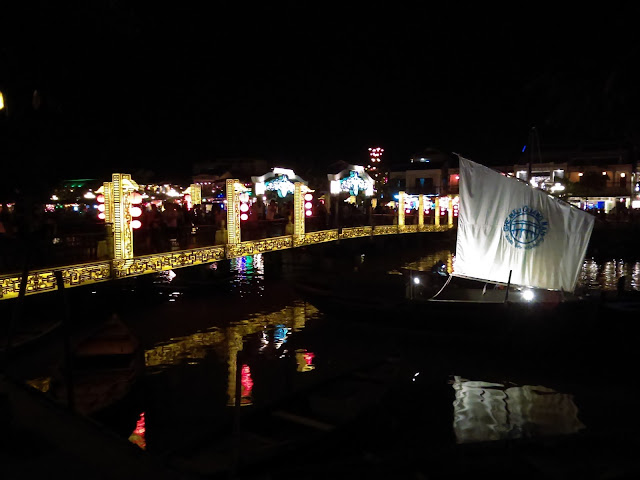 That evening back at the hostel, I met my only roommate and we had a good chat before bed. Backpackers in this part of the world are always on the coolest adventures. Thanks to the low cost of travel here, most people you meet are on a long-term journey - anywhere from a few weeks to several months... even years! It's hard to imagine living this way in most any other part of the world. Southeast Asia really is the backpacker capitol of the world.