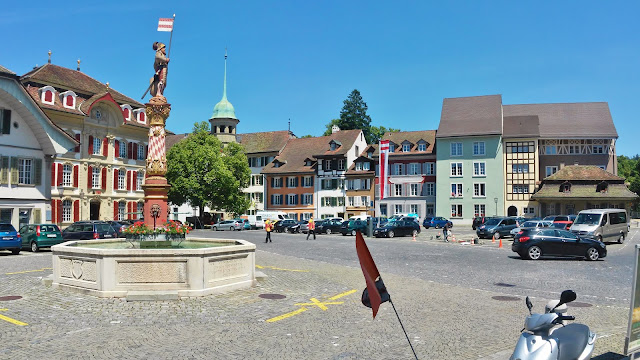 On Thursday, June 9th, I rode over to Zofingen for the street market and found some parking in front of the co-op around the corner - perks of having a scooter in Europe (park anywhere). The street market was pretty busy and had lots of interesting stuff - the best of which had to be the food... the kitschy stuff I could do without. The first place I stopped at was a candy stand where I met a girl from the Dominican Republic who was only too pleased to meet another Spanish speaker. We talked a bit and she gave me a deal on some caramels and even a bag of coated nuts - gratis! Next I stopped over at a bacon stand and got some Swiss Bacon... a bit pricey, but quite nice. 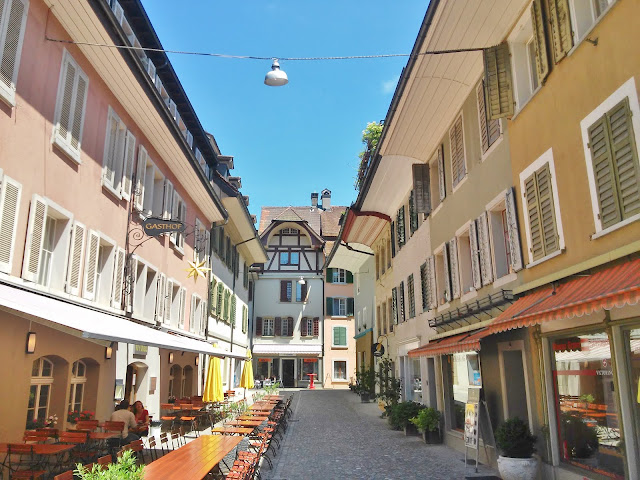 After having my fill of walking around the market, I had a kebab and made some friends at a bratwurst joint. They spoke excellent English so we had a good chat about travel and life living in the Swiss countryside.

The next day I went to Zofingen again with Stefan to check out a scenic spot which included a view of his town Brittnau (left) down the road. Finally, the following day, I packed my gear and Stefan took me to the airport. I then spent the next two days traveling to Portugal, Boston and, my final destination, Seattle.

ALL PHOTOS
Posted by Travis at 9:51 PM No comments: 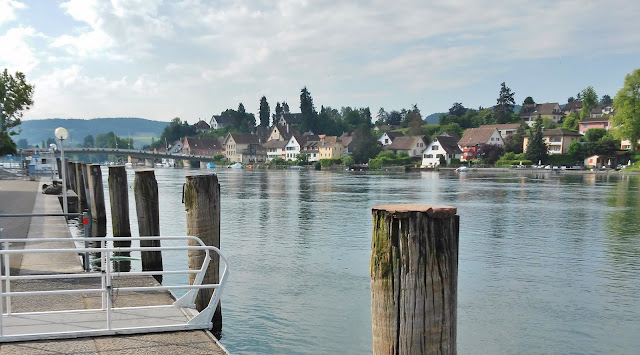 On Tuesday, June 7th, I rode over to Stein am Rhine for a visit to the very well-preserved and beautiful medieval town there. It was a real treat walking around the cobbled streets of a town with so much art in its design work - literally like being in a painting. 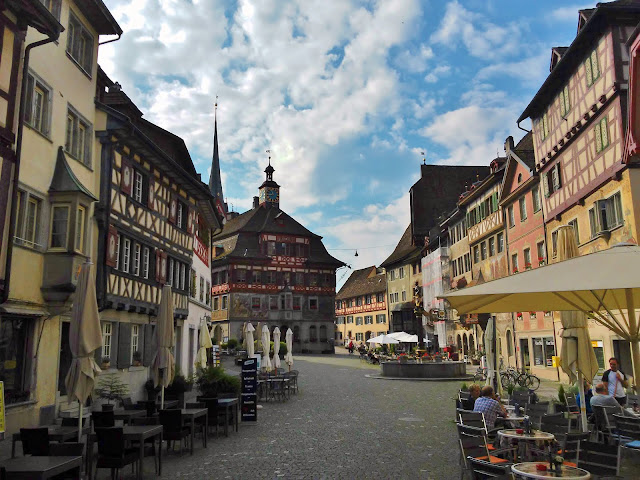 Next I rode over to Budensee to see the big lakes there before heading back west to the little town of Kobletz.

Koblenz didn't actually have anything much to see so much as it was just a historical point of interest. The remaining late Roman watchtower is listed as a heritage site of national significance but I didn't see it... oh well.

Posted by Travis at 9:49 PM No comments:

Email ThisBlogThis!Share to TwitterShare to FacebookShare to Pinterest
Location: Stein am Rhein, Switzerland 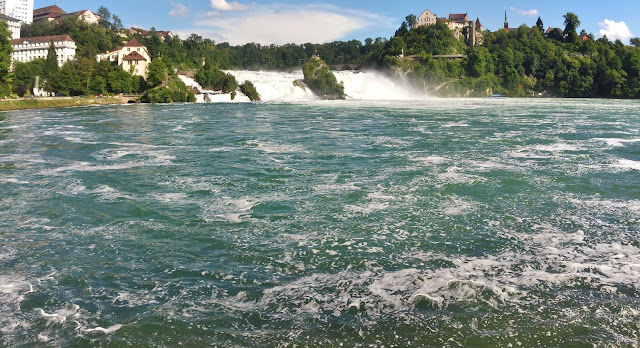 On  Monday, June 6th, I went off on a road trip to Schaffhausen to see Rhine Falls. During the ride I experienced what the Swiss refer to as a "Reinfall" or "fail" - my engine overheated. Not the first time I've had problems with the bike... I went to a local mechanic who then dumped loads of oil in it for me (free of charge) and sent me on my way. I talked to other mechanics over the following week but I never did find an explanation for the problem. At one point we thought maybe it was water in the oil but that somehow cleared up... so it's a real mystery! 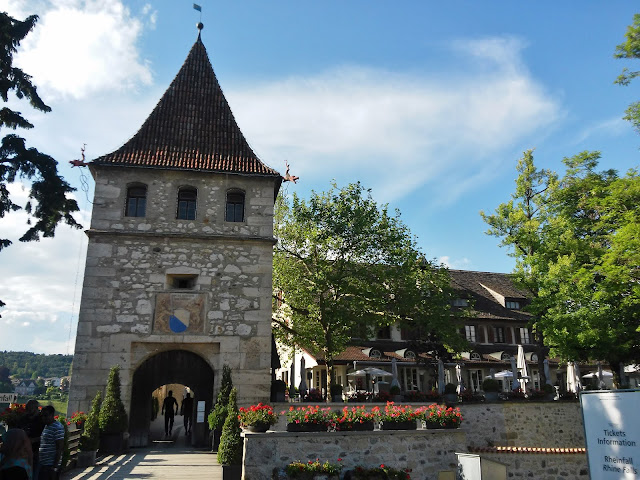 At Schaffhausen I walked around, got some good shots of the waterfalls, and went in to check out the castle. The walk around was a bit rough with all my camping gear on my back but, fortunately, there was a ferry back across to the castle for a couple francs more. The castle, called Schloss Laufen ("Castle Run" in English), didn't seem to offer much. Though that might be due to the fact that there's no real access to the interior. 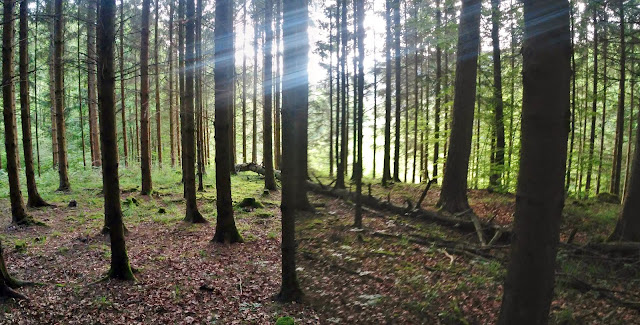 Back on the bike I made my way to the camping spot I had scouted out on Google Maps beforehand. It had a few mosquitoes, and the creepy animal growling sounds were a bit much but, otherwise, it turned out to be a totally awesome spot!

Posted by Travis at 9:48 PM No comments: 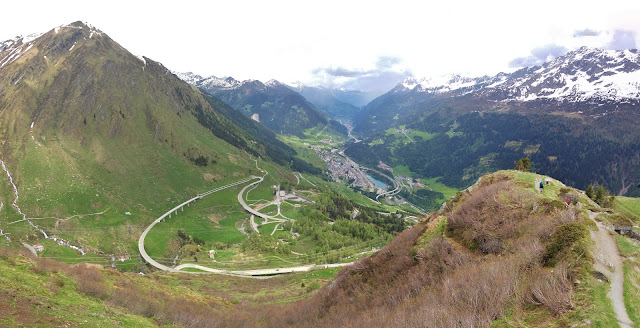 On Thursday, June 2nd, I woke up after sleeping for an entire day/night and had some Rösti - a typical Swiss dish that is basically like hash browns. I didn't do much else till the next day when I got on my bike and rode to Rapperswil to visit some friends from the ski resort in New Zealand (we had a lot of Swiss ski instructors there). After chatting a bit we went for dinner at an Italian place where it turned out our waiter was from Malaga in Spain. So, much to his delight, I got to use my Spanish one more time. The funny thing was that he thought I had been there the other day and proceeded to give me a high five before I could say otherwise. I'm guessing he was too excited to care in any case - certainly isn't often that he meets someone there who speaks his language.

After bidding my Swiss amigos farewell, I slowly made my way back to Stefan's place in Brittnau... very slowly. With the heavy rain and dark clouds, I could hardly see at all - this difficulty was compounded by headlights from oncoming traffic refracting in my visor. Naturally, this caused me to miss my exit at one point (didn't help that the construction made it look blocked off) and I experienced a little déjà vu as I found myself trapped in endless tunnels. By the time I found some open highway where I could exit and turn around I was all the way down in Lucerne - my one-hour drive had become a three-hour journey...

The next day we went to the bakery and had some nice bread then spent some time resting. Finally, on Sunday, we decided to go on a trip to Tessin (Ticino) - a town in the Italian part of Switzerland. Fun fact - Switzerland actually has four national languages: German, French, Italian and Romansh.

On the way to Ticino, we stopped for some Swiss mountain cheese (very strong stuff!) and had a bratwurst while looking at one of the most epic mountain views I've seen... and I've seen a few. Finally, we arrived in Ticino and started a hike into the hills. 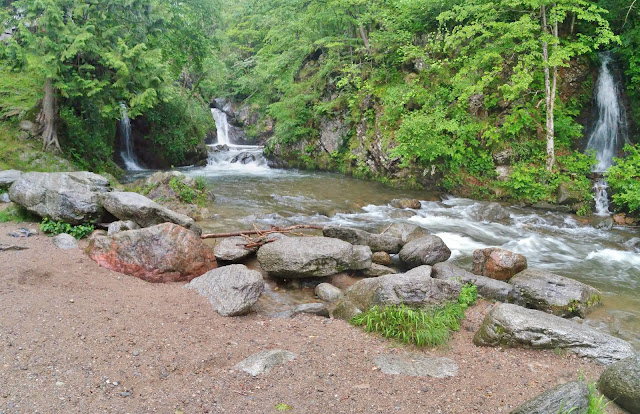 Near the end of the hike we found a manmade stream flowing into a small mill and out the other side. In front of the mill we found a bunch of really nice waterfalls where we stopped to re-hydrate. After that we finished the hike and started the three hour drive back to Brittnau.


ALL PHOTOS
Posted by Travis at 9:44 PM No comments: