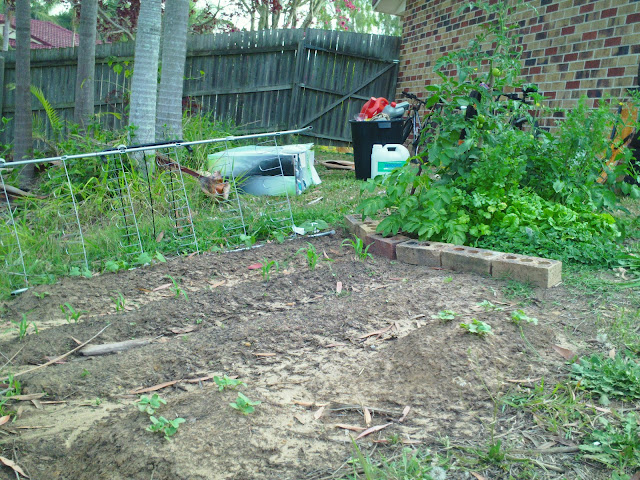 The garden has sprouted! Today I went up to the shopping centre and got a couple pairs of cheapo headphones for $20 paying all in shrapnel (change) from my jug bank. Needless to say, this got me some funny looks from the attendants.

Today I explored the Karawatha Forest with housemate Anita from Hong Kong. As we arrived we noticed there had been a bush fire. Thinking back to my last visit I remembered seeing some smoke plumes up in the trees where the Aussie dudes were hanging out - could they have started this? 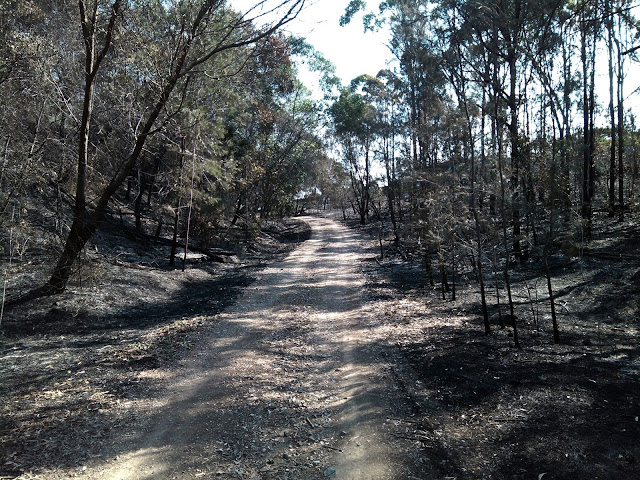 Apparently, it was more likely caused by controlled burns, but you still have to wonder about those smoke plumes... At the quarry I swam across twice and we went up to the lookout. We ended up taking the scenic route which ended up being a lot more interesting than the usual route - completely different environments just up the way from where I usually turn back.

Today I cooked up a steak and made biscuits aka scones - Australians call them scones, we Americans call them biscuits. Of course, Australians refer to cookies as biscuits... a bit of potential for confusion there.

Today I went to the meeting then home where I cleaned followed by work where I cleaned some more. While I was at work my boss Jeff called me. A few days ago the day cleaner complained that I wasn't charging the scrubber but I knew I was, so I stopped using it. Sure enough, the day cleaner complained again today so when Jeff called to tell me that I needed to charge the scrubber properly I explained that I wasn't even using it anymore. Hopefully this will make the day cleaner think twice about blaming others the next time he has a problem with his equipment...

Over the last few days I had another interview and Jeff offered me a new job. Unfortunately, the new job would be across town and doesn't work with my current schedule so I had to turn it down.

Today on my way to and from work I got honked at twice. Once while I was turning into Coles and again was I was turning onto the highway. Without any alternative bike path I have no choice but to ride in these places but people don't seem to understand that. In Adelaide people would yell, even circle around to do it again... here it's worse. Here I cycle (on the left hand side) to and from my job at Coles every evening and people completely lose it as if I'm some kind of deranged lunatic, "a push bike on the road - preposterous!" 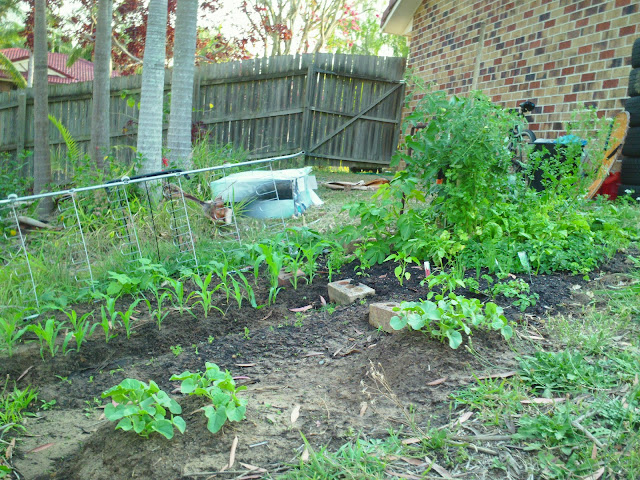 The garden is looking good; I went ahead and separated the corn to give them more space to grow. Later Ben paid me $10 to clean for his week of cleaning. Unfortunately, it seems that the cleaning has not been successful - we now have a rat problem... a big black one.


ALL PHOTOS
Posted by Travis at 9:31 PM No comments: Links to this post

The weather here is nothing like what you would expect in the Springtime but I guess that's what makes it a sub-tropical climate. Today I decided to make a special trip to the Karawatha Forest for a dip in the quarry. After I arrived I jumped in and swam straight across to the other side where I met a bunch of Aussies who were jumping off the cliffs. We jumped off a few times then I raced one of them back to the other side. This guy, Cameron from Cairns, told me that people they actually swim in the ocean in Cairns even with the credible risk of being eaten by a croc. I've had this image of the ocean up there just teeming with crocs and the idea of large groups of people wading out into the death waters is a bit of a surprise.

After the swim I said goodbye to the Aussie blokes and decided to explore another section of the forest that I hadn't yet seen. I figured it would be more of the same as the rest of the forest but I was wrong. I went down on path called Wallaby Track where, go figure, I saw a Wallaby. Then I found a massive water reservoir with some cheeky signs about snakes and not climbing the reservoir. 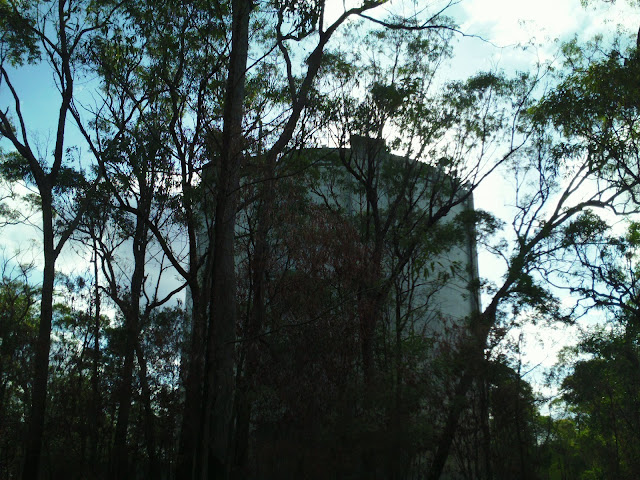 Next I found another rock outcrop overlooking the other side of the forest and cycled down to the main entrance to the forest.

There I finally discovered a legitimate map of the hiking paths, cycling paths and the rest of the forest as well as signs discussing the various flora and fauna. 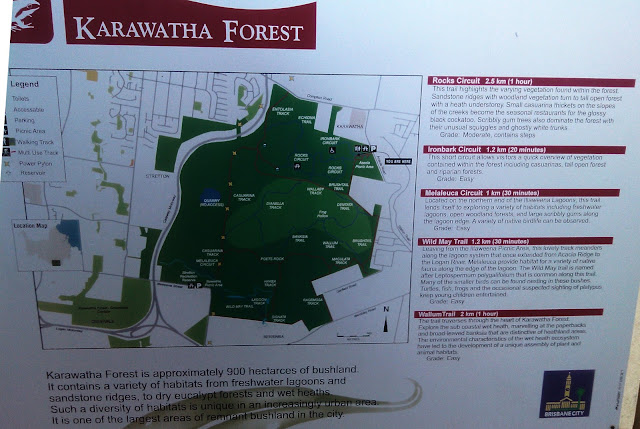 At work I picked up an extra job during my night shift for an extra $50/week.

Posted by Travis at 4:56 PM No comments: Links to this post

Today I followed up on a few jobs and seared up some smoked salmon.

Today I went to interview at a place called "Tuition Fruition" for a tutoring job. Vijay, the owner, was very keen to get me on a couple computer projects with him and a client as well as possibly tutoring some kids after I get a blue card. Vijay is a kiwi from New Zealand and he suggested getting work at the universities when I get there. Apparently they have a lot less "red tape" on the hiring process there as opposed to Australia where serious certification is required for any and all work. After the interview I headed up to the Sunnybank Shoppingtown and had a release of interest notarized by a JP (Justice of the Peace) for free then sent it off to America for Brian to transfer my car into his name.

Today I met my driving student in Browns Plains and made another $50.

The last few days I relaxed, went slack lining again and went to the church meeting. Today I did some graphic design for Vijay and he paid me $25 for a couple hours of what I consider playing on the computer. At work I finally got my money from a guy named Money - Jeff accidentally gave my money to Money so I had to get my money from Money today.

Today we got a new housemate from Hong Kong named Anita - she is also a backpacker.
Posted by Travis at 6:54 PM No comments: Links to this post

Today I applied for a bunch of jobs and later I rode down to the bike shop in Browns Plains and used their tools to replace a tire and adjust the brakes. I ended up making friends with the guys there, and I didn't have to be at work down the street for another hour, so we had a couple drinks. We talked about the Northern Territory's killer crocs and political sovereignty - a similar governmental disposition to ACT (Australian Capitol Territory). Apparently the highways in the NT just recently set up speed limits at 130 km. While we were talking I gave them my resume and one of the guys helped tweak my bike a bit so it would operate more smoothly.

Today I went up the road to apply for a few promising local jobs then drove over to Karawatha Forest for a hike up to the quarry with Jenny and Liam. After Liam and I jumped in a couple times and had a nice swim we all headed back.

Today I went up to the city to catch a ride with a group to Sunshine Coast but the car we were supposed to use broke down so I started on other plans. After having some Sushi for lunch I went to the artificial beach on South Bank and had a swim while waiting for my friend Jack from Western Australia to join in. We hung out a bit then he dropped me off at the City Botanic Gardens where I did some slacklining with some couchsurfers. One guy could do back flips on the line; it was a risky maneuver so early in the day but he gave it a go for the camera.

Posted by Travis at 11:51 PM No comments: Links to this post 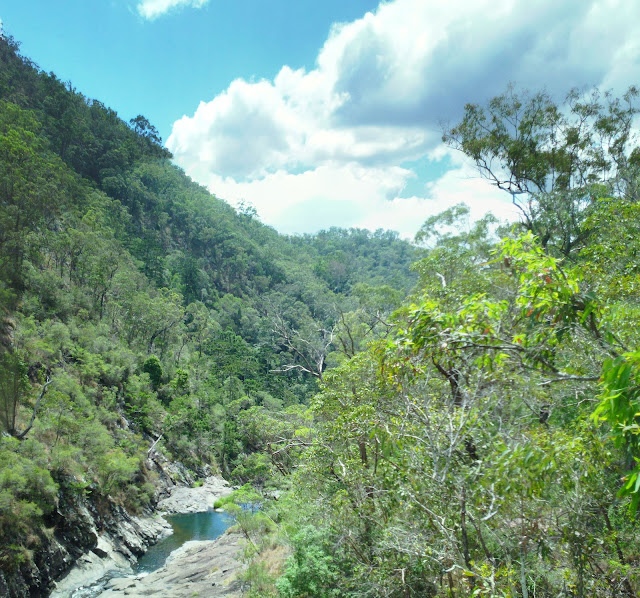 Today I went to Tamborine State Forest with Jenny and Liam while down interviewing for a job at the Coles in Beaudesert.

First we went to Cedar Creek to check out the falls. It was a short walk to a lookout then another trail down to a swimming hole. The water was a bit cold so we dare not go in. 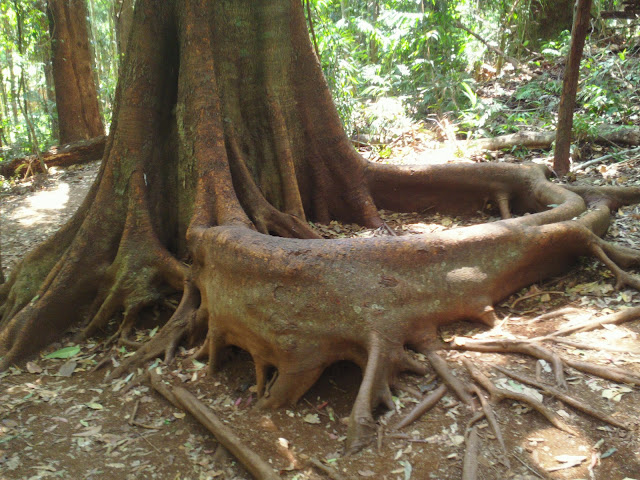 On the Curtis Falls walk we saw some interesting trees/plants, an Akidna and, of course, the falls. 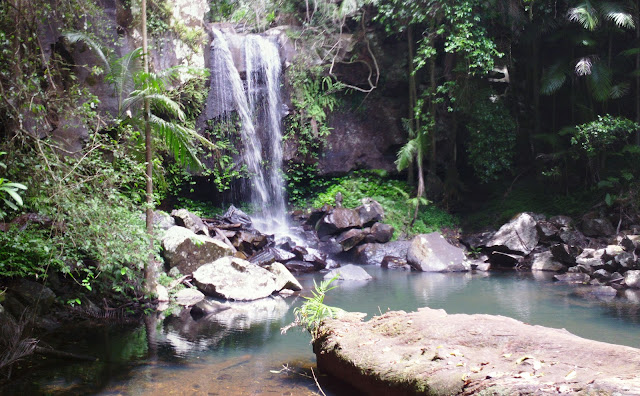 Next we had a barbie in the park and hiked the Knoll Walking Track. 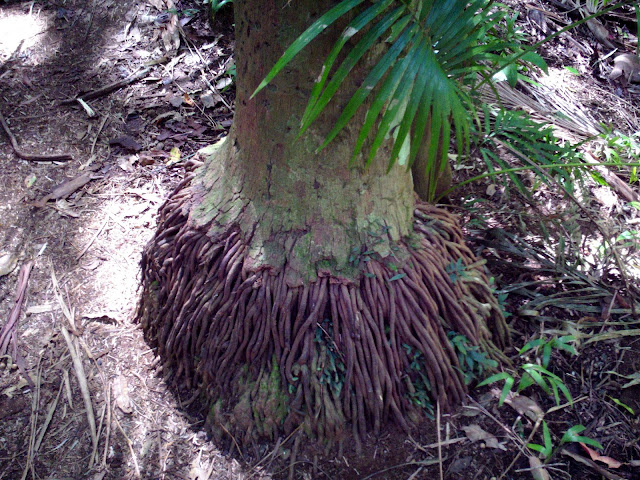 The rain forest was very jungle-like, some parts very reminiscent of the movie Tarzan. 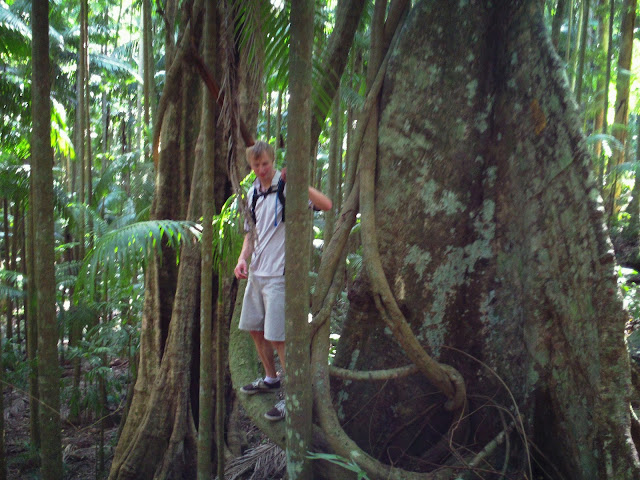 Finally we went to my interview at Coles in Beaudesert, where my visa was a concern yet again, then headed back and made ice cream. Later in the evening I saw my little lizard friend on the window again and caught some video of him hunting a moth :-)

All Photos
Posted by Travis at 7:40 AM No comments: Links to this post

Today I woke up late - still sore from falling off my bike. Back at the house I looked for a car but ultimately ended up making a deal with Jenny for a ride to my upcoming interview in Beaudesert - an hour away. Ben and I went for pizza and then caught a ride with Vick and Vicky up to South Bank for River Fire - a loud and entertaining fireworks display. 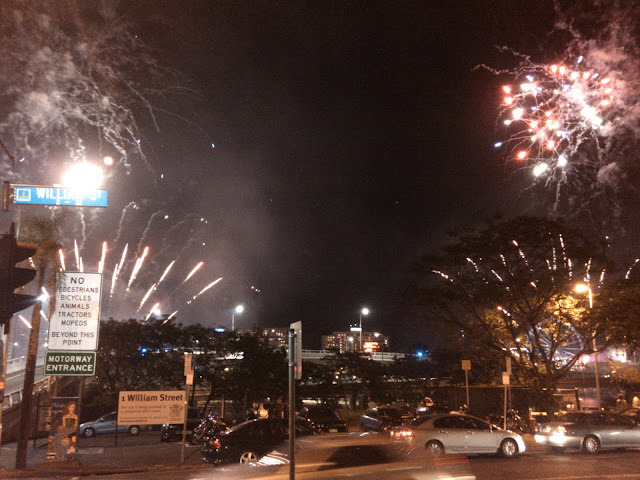 Later, after work, one of the night fill managers was letting me out and complaining about how late they would have to work to finish - which prompted me to ask if they needed any more people. She told me this is absolutely the case and to talk to her boss so tomorrow I will bring my resume for her to pass on for me. 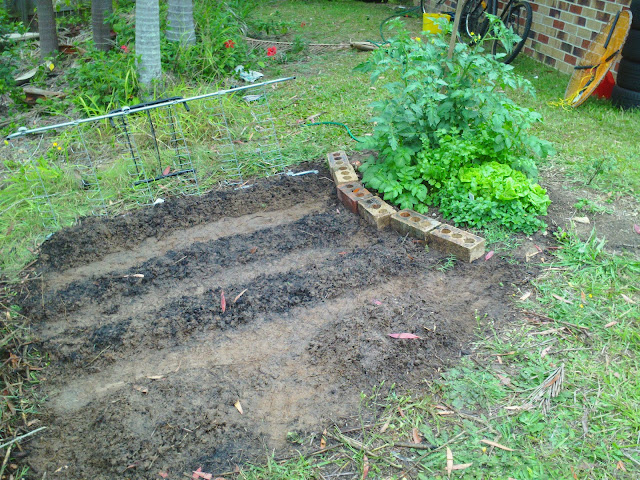 Today I was supposed to go on a trip to sunshine coast but it was moved to Saturday because of the weather. Instead I expanded the garden and planted Beans, Corn, Carrots and Rockmelon (Cantelope).

Posted by Travis at 7:32 AM No comments: Links to this post