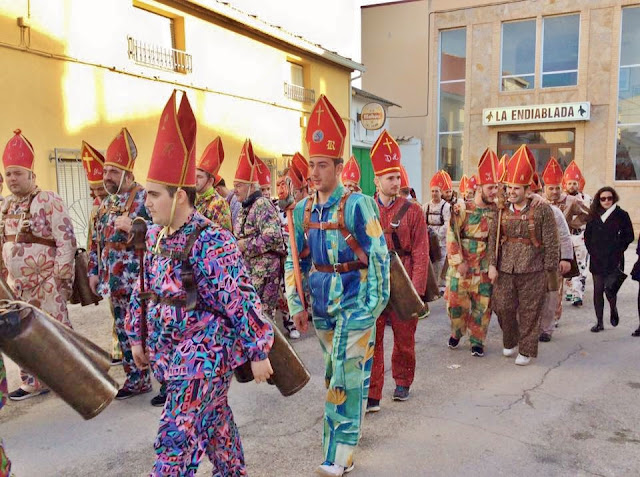 On Wednesday, February 3rd, I caught a ride with Julio to "La Endiablada" in Almonacid del Marquesado. Over the last month I had mostly been working and had even found a new teaching gig at an academy in Las Pedroneras. I also rebuilt the motor on the bike and opened an account with a new bank. Caja Rural CLM was seriously letting me down - almost four months and still no debit card or "keys" for checking my account online. They were also blocking my account each month so I had to call in for access to my monthly salary. Instead of continuing to play that game, I went and paid 20 euros to open an account with Liberbank and had all my stuff within a week!

Anyway, La Endiablada turned out to be a very interesting cultural experience (way better than dealing with Spanish banks!) and, apparently, it is the oldest tradition of any pueblo in Spain. Referred to as Los Diablos or "the Devils", the participants (all locals of the small pueblo of Almonacid del Marquesado) dress in colorful pajamas, tall hats and harnesses with giant cowbells and walk the streets making as much noise as physically possible. From what I understand, the tradition is based on a fear of demons and the concept that noisy marches around town will ward them off... a bit spooky, no? Certainly must be for those concerned about demons.