Today Stephen and I went to get our phones repaired. The store that sold us our phones, Crazy Johns, took our phones and gave me a loaner since I didn't have a spare. They charged me $50 deposit for a scratched up piece of junk from the late '90s... On the way back we went for brekky and I got some headphones at JB Hi Fi. Then we stopped over at a cafe for jam tarts and Belgian hot chocolate.

Later on I went to Coopers Alehouse to meet up with David for a drink. David told me of some hard times including the death of Zsusha's dad, Joseph. After a couple drinks we got some food and played a game of pool.

Today I slept in for the first time in a while and had the same brekky as I have the last few months. 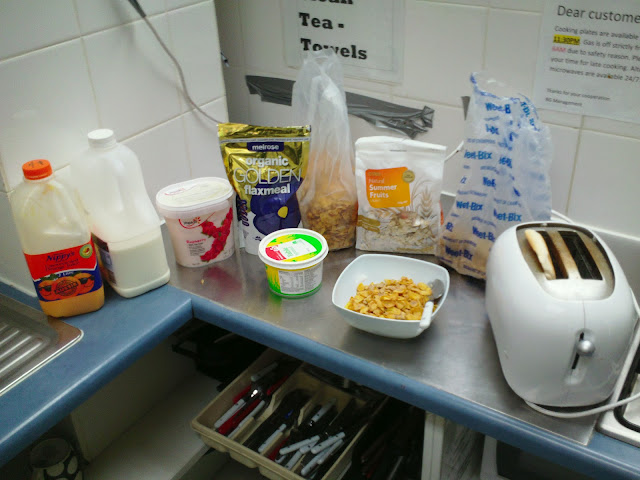 After a while the hostel staff including myself had a meeting upstairs and Brian gave us free drinks. I then helped Ivy with an English lesson, did a detail shift and talked travel with an Aussie bloke for a bit before starting night shift. During this time I noticed a particularly strange group of girls that had recently checked in. They play on Roller Derby - a game where you dress like it's Halloween and roller skate into each other.

Yesterday I helped Tim move a couple sofas he bought for his new house then, back at the hostel, Stephen made pasta for everyone and we watched a movie in the lounge. Today Wayne put on a barbie and we all had a few snags.
Posted by Travis at 8:34 AM