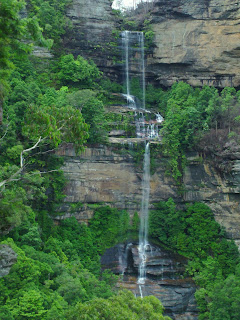 Today I got up at 6a to go to the Blue Mountains. I headed to the station and caught the train. On the way I spoke with a Canadian who has been finding accommodation with friends from a party he went to. On an unrelated note, he brought up something that many fail to mention about Canadian health care - he explained that people who need an urgent operation will actually go down to the US and pay to get it done... I guess our health care in the US isn't so inadequate after all. Another guy on the train named Chris lives in Katoomba with his wife, Lynn. Chris was keen to share the history of the area and even gave me a ride to the trail head. After hiking along the cliffs and down into the Leura forest I climbed up the Furber Steps and got one more view of the Australian version of the Grand Canyon before finishing my four hour hike through the bush and heading back to the train.

During the train ride back some goofy teenaged Kiwis took interest in the napping American. They began asking me questions and talking about their lives in Australia for the last five years. Apparently a lot of Kiwis make the switch to Australia because its so easy for them to get citizenship and the economy is so much better. Back in Sydney I made my way back to the hostel and went out for pizza with the others.

All Photos
Posted by Travis at 8:26 AM