08/27/2011
Today the Green Tortoise stopped for breakfast at a store called Smiths. This provided a good opportunity to make food from scratch, and save money. In fact, many sandwiches can be made for the same price it costs to buy one pre-made. After undoing “the miracle”, we headed for Zion National Park in Utah. A few of us used the shuttle there and got off at the junction where there was a swimming hole with a waterfall. In the 100* heat it felt amazing - this almost made up for the 3-4 liters of water needed every few hours just to keep hydrated. In fact, the intensity of the heat this time of year makes hiking Zion a bit of a feat. Fortunately, Green Tortoise trips generally attract more adventurous and outdoorsy types, so many actually seemed to welcome the challenge. Up on the left side of the falls, Bonnie and I found a waterfall… Okay, more of a painful water-powered beating. Bonnie didn't even hesitate and went down smiling the whole way, something I figured was a good sign...  so I quickly followed only to discover that she is one of those people who smile through pain. A better idea would have been to go to the bottom of the slide and swim against the current. Much more fun and a lot safer I'd say. 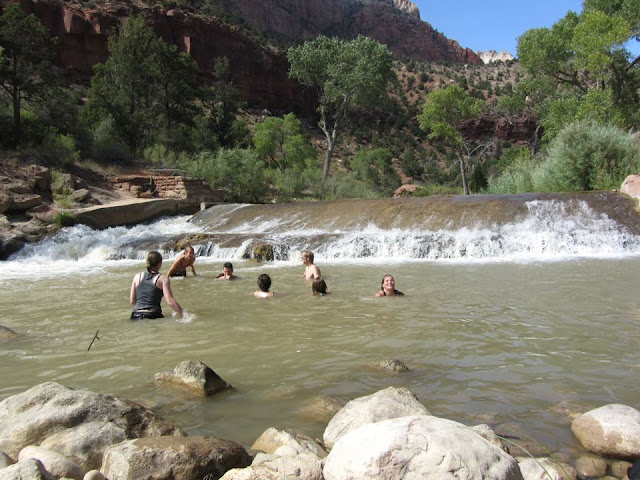 On the shuttle back to camp, there were some guys from Vegas who offered some useful information on our upcoming destination - Vegas. Just goes to show that being sociable while traveling can be a valuable gesture. After dinner some played with a Frisbee and later set up the “cuddle puddle” - a collection of cushions from the bus laid out on a tarp so campers can sleep under the stars. I, on the other hand, set up my hammock for the first time and slept on that. As it got dark, the sky flickered with lightning. Ear plugs worked to drown out the frogs, and the resounding thunder, but a little later it started to spit a bit as it had done many times that day. This sent everyone in the “cuddle puddle” running for the bus but, as expected, the increased humidity didn't last.
08/28/2011
This morning I woke up extra early to prepare for the hike. Setting out early made it possible to do the Angel's Landing hike before getting toasted by the scorching sun.

At the top of the mountain, Bonnie and I fed the chipmunks trail mix and watched with a bit of concern as one suicidal daredevil dove off the cliff after a peanut… I'm guessing it grabbed onto the wall on its way down though. On the way back some of us stopped to eat at the cafe and then headed back to the bus to lay in the shade. 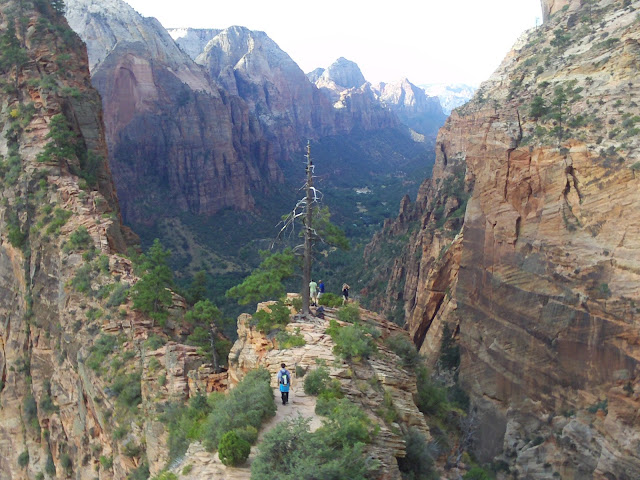 After popping over to Las Vegas, Nevada, there were many things to see, but only six hours to see them. After wasting time looking for the Vegas sign, as well as the diagonal elevators at the Luxor, and then getting lost in the Miracle Mile Shops, it was time to phone a friend. After dropping into Caesars palace for the talking statues, and getting footage of the Bellagio fountains on the way, we met up with a local friend who picked us up and provided a short ride down to the Fremont Experience AKA old Vegas. There, all the best FREE and reasonably priced entertainment can be found. 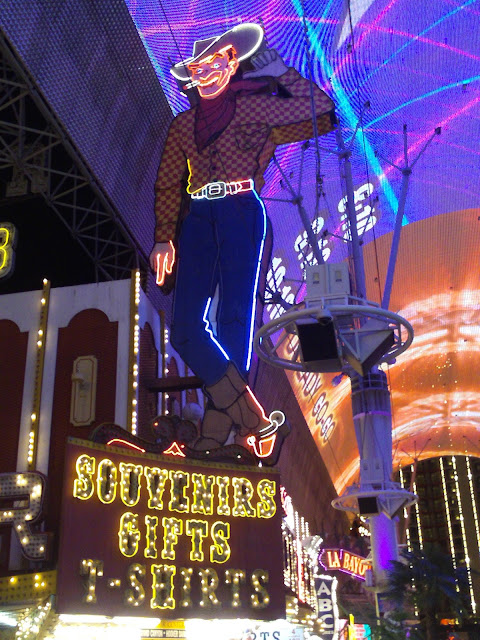 Over in Fremont, live street shows, such as shadow bands and motorcycles driving around in a ball, can be seen and, if you want to do something with a bit more movement, a zip line ("flying fox" for Aussies) takes you almost the whole length of Fremont Street for just $20. When your turn comes, it is highly recommended that you ask the assistants to push extra hard - I was certainly glad that I did. Also, if you're hungry, you won't want to miss the Fremont Casino Buffet, which offers a whole range of choices from steak to Crème brûlée in the evening for only $12-15.
After all of this, the six hour allotment was surely running out and the time to leave or be left was near. Back at the bus, many began to vie for the wonder and excitement of sleeping on a shelf (the bunks hanging from the ceiling)… nights of relative comfort for the 'vertically gifted' were numbered, as we were to be evicted from our "high-value" allotments. Oh well, still beats paying for a hotel room and having to drive all day!