09/02/2011
Today the group made eggs and crumpets for breakfast and we headed for the border. The Rio Grande is a natural border between the US and Mexico and it runs through the Santa Elena Canyon. It is also a place where Green Tortoise takes passengers to have an all out mud fight. The mud can be scooped up like snow and chucked at the victim of your choice and after everyone is thoroughly bathed in sludge it's just a quick swim in the "rio" and you're all clean. 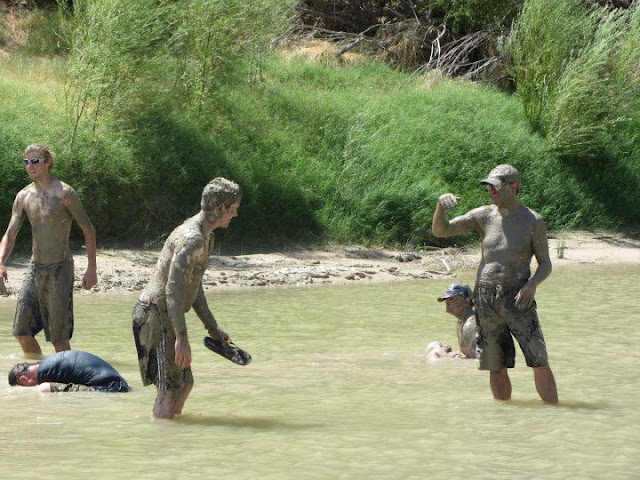 The next major stop after the Rio Grande was to be Austin, but the Tortoise was stopped early at a checkpoint that nobody from the trip will forget…as everyone was woken up to get off the bus (including Americans) a couple of unprepared passengers were getting threatened with jail time and/or a fee for not having their passports available. Also, after stepping off the bus we noticed a stack of bags, a stack of SEVEN ONE POUND BAGS of Marijuana belonging to an Oregonian passenger named Luke. After Luke was taken away in cuffs some dogs had to sniff out the bus a bit so a few of us went with the guards to use the jail bathroom. While they were patting us down a job inquiry seemed prudent - turns out you can start at $75k/year as a border guard if you have your bachelors degree!

09/03/2011
Arriving in Austin most headed to “Austin Java” for breakfast where they serve eggs, “taters,” and “chorizo" aka sausage. After breakfast everyone hired bikes and I figured it might be a neat idea to try a tandem. It was interesting, but more of a hassle than anything. If the person steering stands up it throws the rear rider off balance so going uphill was a bit of a pain.

The first place we stopped was the Texas State Capitol. Something many don't know is that the capitol was actually moved from Houston to Austin in 1839, so if you thought the capitol was in Houston, like many do, then you're half right. 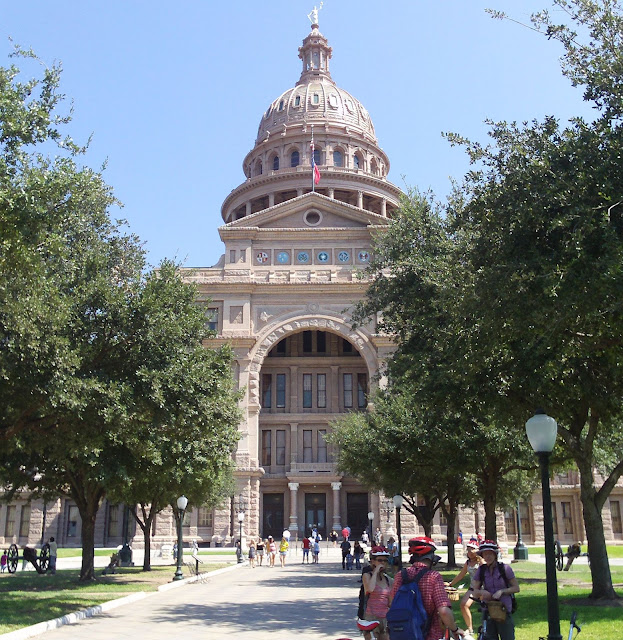 At the university the LBJ Museum and Library have many interesting exhibits. Many artifacts are held from the life and presidency of Lyndon Baynes Johnson including documentation from the liberal “hippie” movements of the 60s, gifts given to the white house by people from “all walks of life,” and an animatronic LBJ robot telling jokes with his recorded voice. 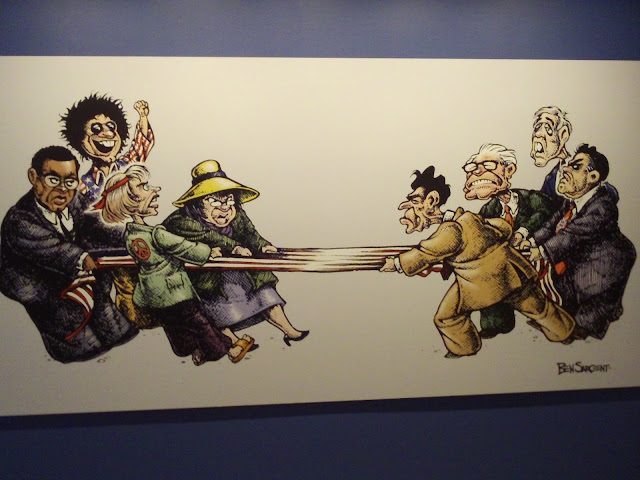 Another enjoyable stop in Austin is Amy’s Ice Cream; it's kinda like cold stone but with flying ice cream tricks instead of jaded song singing. After cooling off there a bit Whole Foods is right across the street where you can get a good meal for a reasonable price. Finally, Barton Springs is THE place in Austin to go for a swim; their giant outdoor pool/spring is refreshing and a good place to meet some locals like a guy named Joel (hoe-el). According to Joel various laws govern different counties in Texas and can be very distinct and even conflicting from county to county. If it's Summer time you also want to make sure you don't miss the flight of the largest urban bat colony in North America which happens at about 8p. Unfortunately, after I convinced the Tortoise drivers to delay the departure so that the group could see it, Claude was the only one of us that actually went.

All Photos
Posted by Travis at 1:10 AM