On Wednesday, October 21st, Julio and I went to work. On the way he jokingly told me of the "selvas de vino en la Sahara del Manchego" or basically: the wine producing jungles in Spain's version of the Sahara which is inhabited by local people of Castilla la Mancha (Manchegos). Indeed, the vast expanse of vineyards in Spain could easily be compared to that of a desert - endless. Interestingly, as the region lends it's name to it's inhabitants, so does each pueblo; the people of Belmonte are Belmontenos, in Las Pedroneras they call themselves Pedroneros, the Mesenos live in Las Mesas and so it goes from pueblo to pueblo all throughout Spain. 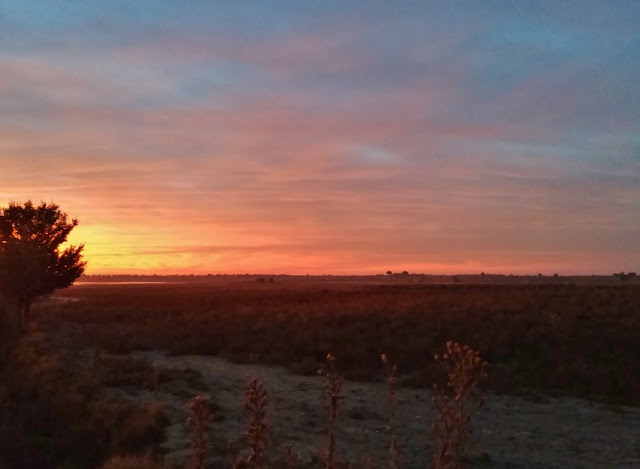 At the school I presented a PowerPoint introducing myself and the land I am from to each of my classes. The day went by pretty quickly and soon Julio and I were back in the pueblo of Pedro Munoz. We picked up some "pan tierno" (fresh bread) and, after returning home, had "merienda" - a light meal usually eaten between lunch and dinner. After that we relaxed for siesta and then headed out on an excursion to Campo de Criptana.

On the way we stopped at a local wetland park followed by the santuario de la Santísima Virgen de Criptana - a cathedral in Campo de Criptana which overlooks the countryside. After that we made a trip over to "los gigantes de Don Quijote" (the giants from Don Quixote). Of course, if you've ever heard the story of Don Quixote, you know that the "giants" are actually just wind mills or "molinos" mistaken by Don Quixote (the crazy old semi-protagonist of the story) for giants. As part of his senile decision making process, Quijote makes the valiant pledge to take down the would-be aggressors (assuming that giants existed anywhere outside of his wild imagination). With sword drawn, he charges toward them in an attempt to slay his rather stationary foe... disregarding the vain cries of his squire, Sancho, who has the futile notion that he might actually be able to talk some sense into his kooky companion.

Pretty wild story right? Just another tale from the adventures of Don Quixote de la Mancha: an instant classic which has been around for centuries... origin of the Spanish conquistador perhaps?