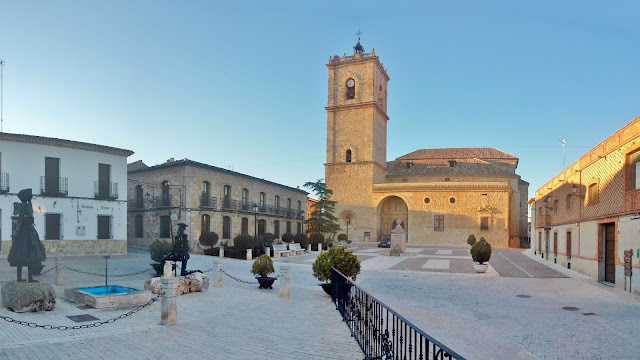 On Thursday, October 22nd, I taught at the school and sorted out my Spanish bank account before heading back to Pedro Munoz with Julio for some Merluza (Hake) and rice. Later on after siesta, we went on another excursion. This time we went to El Toboso to see la casa de Dulcinea (the house of Dulcinea). As with the giants in Campo de Criptana, la casa de Dulcinea is the purported site of a famous scene in the fictional novel by Cervantes called Don Quixote which is also known as The Ingenious Gentleman Don Quixote of La Mancha. According to this particular tale, crazy old Don Quixote is meandering around on his way to some place for some contrived reason when he comes upon a simple peasant woman named Dulcinea.

Well, in his usual psycho way, he assumes that this woman (who, according to Sancho, is rather plain, quite loud and a even bit masculine) is some sort of princess and he vows to defend her honor somehow by going on a "quest" for her for some reason even though he hasn't met her and doesn't actually know anything about her... I think at this point he goes on a killing spree at a local pub. Anyway, after exploring the rather large "house" of Dulcinea (it actually does lend itself to the idea that she was a princess), Julio and I walked around the pueblo a bit. We saw a couple of large statues of the Don and Dulcinea and then went back to Pedro Munoz for kebabs.