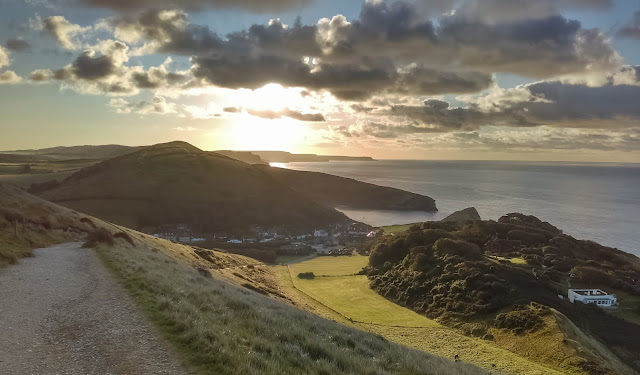 As I mentioned before, the Jurassic Coast is really aptly named. Most places along the way have that cool Land of the Lost feel that you get when you see something preserved from another era. Some things are from ancient cultures and other things are simply prehistoric. The village we stayed at the night before itself was pretty old school. Most of the homes there have those really cool, and very expensive, thatched roofs. 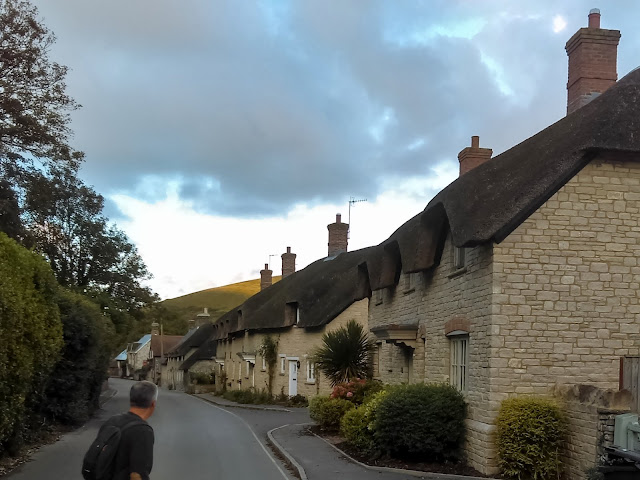 We exited the town onto a path that lead from Lulworth Cove to Durdle Door. The name 'Durdle' comes from the Anglo Saxon 'thirl', meaning a pierced hole or opening, which is exactly what Durdle Door is. The hike there was about 30 minutes or so up a hill and down the other side. It was a perfect morning for taking photos and the temperature was ideal. Steve had been there a month before when it was a bit warmer and had decided to go swimming through Durdle Door to cool off. This, unfortunately, hadn't gone too well. It seems he had swum a little too hard in water that was a little too cold and lost all motivation to swim back - he almost drowned. Luckily, I think he said the current helped a bit so he was able to make it back; a little shook up perhaps but alive nonetheless! 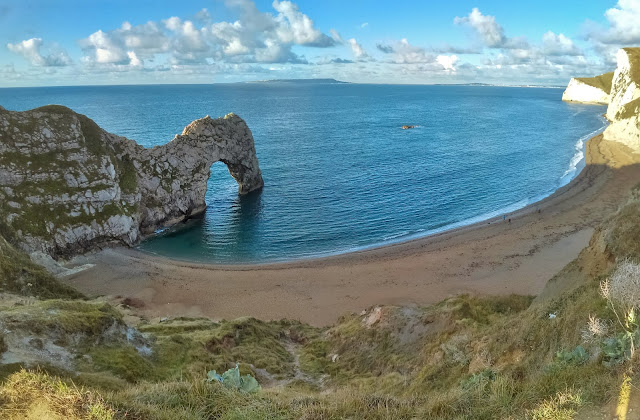 We had a good look around before heading back to the village. From there we drove until we found a little farm shop where we could grab some breakfast. Steve got the last breakfast roll so I ended up having a Scotch egg - a hard-boiled quail's egg wrapped in sausage meat, coated in bread crumbs and baked, or possibly deep-fried. Scotch eggs are served cold, but I couldn't help thinking that it would have been better warm. Still, not bad. 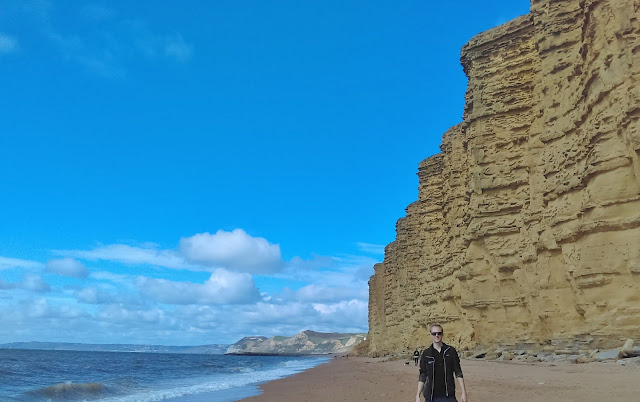 Our next stop was West Bay. This was a really cool place; the cliffs definitely had some serious stratification going on - reminded me a lot of something by Antonio Gaudí in Park Güell in Barcelona. This makes a lot of sense actually when you consider that his work is largely inspired by nature. As we walked along the cliffs, we also found lots of large broken-off chunks with tons of fossils visible on the surfaces. I even found a large coprolite... also known as fossilized dino poo. 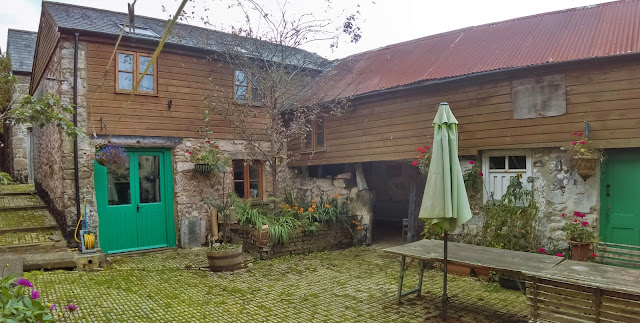 We continued on from there to our quirky hostel in Moretonhampstead on the north-eastern edge of Dartmoor. The owner there was a funny cat lady who clearly wasn't too concerned about running a business. Not only did she allow her animals to roam around in the guest quarters but, the next morning, she was nowhere to be found. Lucky for her we had every intention of paying and would be mailing her the money later. I can imagine that some guests are occasionally a little less forthcoming though. 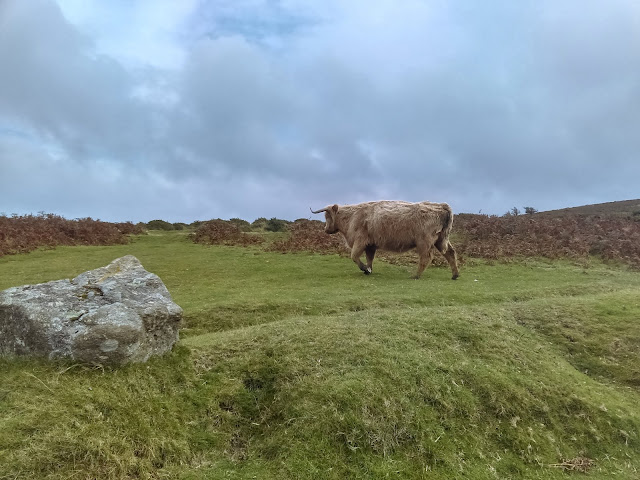 Covering an area of 368 square miles (954 sq km), Dartmoor contains the largest area of open country in the south of England. As one of several high moors in the area, including Exmoor and Bodminmoor, Dartmoor is known for its tors - hills topped with outcrops of bedrock.  As we passed through, we saw lots of these tors as well as some cool looking red cows. At one point we decided to stop and climb one of the hills in order to visit the tors. I was surprised at how much colder it was up in the moors. The freezing wind blasting us with an icy mist made it seem as if we had stumbled into a whole other climate. The whole hike was probably about 30-45 minutes, including our visit to the bronze age settlements on the adjacent hill, but in my memory it easily could have been twice that. Nevertheless, it was a fascinating environment littered with relics from prehistoric societies dating as far back as the Neolithic. 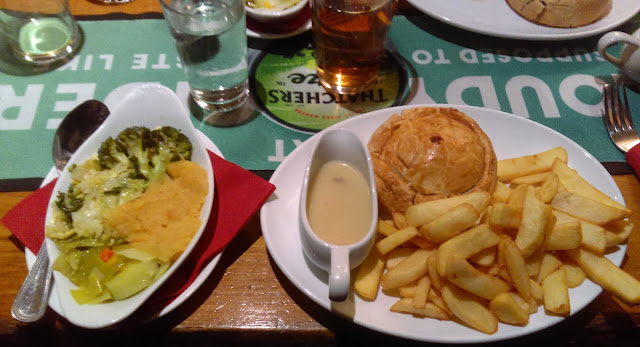 Later on I had a pretty amazing British scone with fresh cream spread. Then, that evening, we had chicken pie with chips at a local pub. This was also really good. Though, that's unfortunately more than either of us could say for the local cider... yuck!