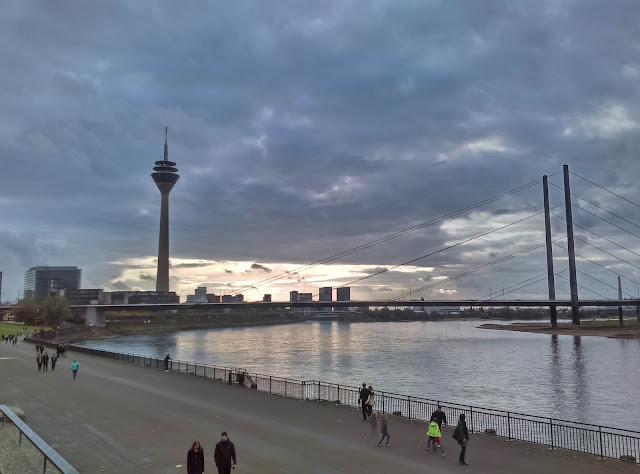 On Tuesday the 17th of October I hit the road again. This time I had a couple days drive ahead of me... this was exacerbated by the fact that my bike's condition was rapidly deteriorating. I couldn't even go over 100 kph (about 60 mph) without the bike overheating. It was evening time as I pulled into my prospective camping spot which I thought looked pretty promising. It was a densely wooded area with no sign of human activity... until I spotted a man with a dog. Actually, he spotted me. I was stopped at a sign, which unfortunately was a warning about the only dangerous large animal in Germany - the wild Boar. This already had me thinking twice about this spot, but then I saw this guy staring at me. I would later come to understand that Germans often just stare a lot in general when they don't know you, or are trying to figure out if they do. With this guy it was only when I turned around that he went on his way. He clearly wanted to make sure I wasn't planning on sticking around. Well, it's one thing to freedom camp when nobody's looking, but he was probably going to dob me in, so I got back on the autobahn... for another two hours. By the time I got to my next spot, it was dark, and I was actually pretty close to my final destination - Dusseldorf. I was happy to finally arrive at what turned out to be a beautiful camping spot near Cologne. 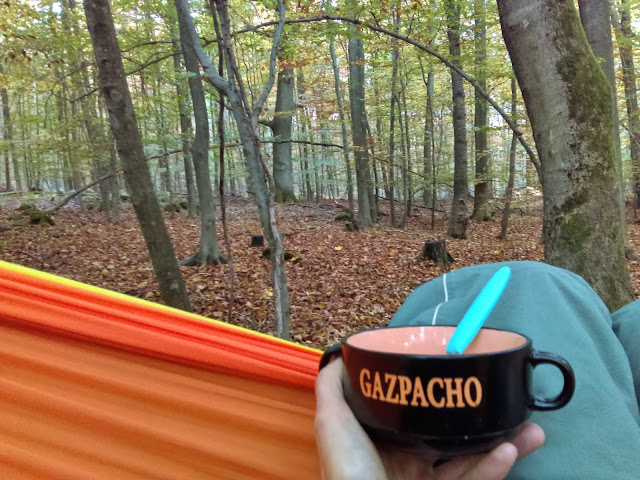 The next day I had my morning muesli before packing it all in. The final stretch wasn't easy. The bike overheated every 10-20 minutes which meant that I had to stop and add water to my leaky radiator... this wasn't so bad until I hit traffic. After about 30 minutes overheating in traffic, I was sure that the bike would be permanently damaged. At the first exit I could find, I pulled off to find a place where I could check the bike. It was way overheated by the time I finally stopped but, after adding the water, I was happy to find that the bike started back up without much difficulty. A short while later I finally arrived at the meeting hall in Düsseldorf. I could finally breathe a sigh of relief... against all odds, I had actually made it! 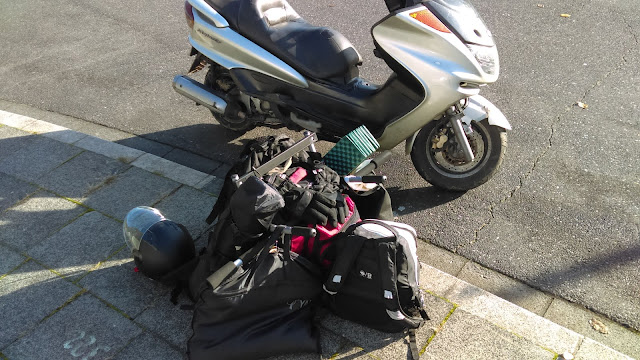 I dropped off my stuff then went to a Korean restaurant with a family from the meeting hall. After lunch we went on a hop-on-hop-off bus tour of the city that lasted all afternoon. During the tour I learned a few things about Düsseldorf that I've often referred back to. They told us about the Oberkasseler bridge, which was built upstream before being brought into place using tracks - this was the first time such a feat of engineering had been attempted, and it was a complete success. Another interesting fact is that Düsseldorf has more parks than any other city in Germany. This makes me happy because I don't really care for cities in general, so the more nature the better. They also told us about the Altstadt or "Old City" (a historical part of town that lots of people, tourists and locals enjoy visiting), and a church with a crooked spire. The church of St Mary and All Saints has inspired some really strange myths with regard to its spire. The one they told us on the bus says that it twisted away from a marriage that was conducted under the false pretense that the bride was a virgin. According to the myth, the spire will only twist back when an actual virgin gets married in Düsseldorf... it's been about 600 years now.

That night I rode over to the nearby suburb of Kaarst to meet my couchsurfing hosts with whom I'd be staying for the week. Over the following days, I helped out with Bible distribution in the neighboring cities of Essen and Cologne a bit before starting my search for a job and a place to live.