After a couple days sitting in a hostel in Madrid, I was happy when my good friend Stefan arrived to pick me up. He had picked me up in Spain before for a similar trip (if you don't count the detour down to Morocco). One big difference this time was that we had a bit more time to stop and see the sights. 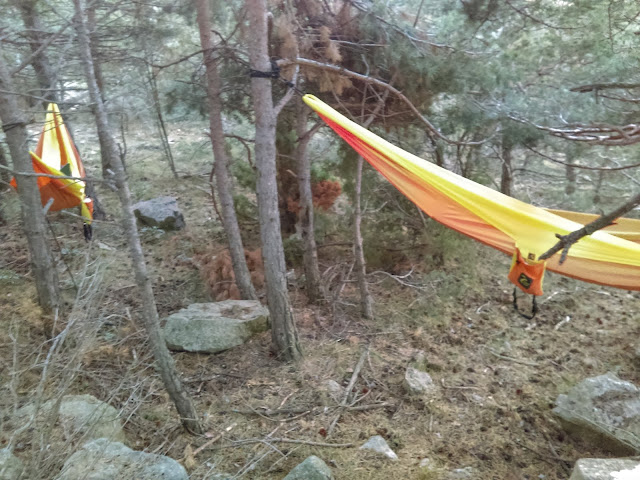 Stefan had come prepared with the perfect European camping device - the hammock. I've read several forums on the subject of "wild" camping in Europe; many of which do not cast a positive light on the subject. It seems that the Europeans don't take too kindly to people going off the beaten path in order to get away from it all... AKA actual camping. No, the European way is to spend 30 bucks on a small section of someone else's backyard in the middle of about a hundred other "campers". Yeah, thanks, but no thanks. Unfortunately for people like myself, the laws tend to reflect the attitude that Europeans have toward "wild" camping. So, the only way to get away with the dastardly deed of roughing it in the woods for a night or two, is to be aware of what in particular the local authorities are most concerned about.

It's not really so much that they hate people setting up camp in their beloved forests (though I'm sure some would find a reason to get upset about that, e.g., it's not safe, it doesn't belong to you, etc.) but, rather, it's the fact that campers haven't always shown the most respect while doing so. Some campers litter, others try to set up more permanent dwellings for long-term habitation, and still others just don't have the sense to stay out of the public eye. With these things in mind, it's really not that hard to come up with a few strategies for keeping everyone happy... more or less. First of all, don't camp in places where you're likely to be found! That should be obvious, as should not littering. As the old saying goes, "take nothing but photos, leave nothing but footprints."

The last thing to consider, especially if you're not really that far from civilization (a likely scenario in the relatively crowded landscape of Europe), is keeping a low profile. This is why the hammocks were so useful. Setting up a tent not only draws more attention, but a tent also looks more "permanent". That's why one of the few pieces of actually useful advice that I was able to find regarding wild camping in Europe that one take a tarp, lay down, and cover up with it! Well, I'm not above doing that, but hammocks are a bit more comfortable and are just about as likely to be perceived as a temporary sleeping situation. In any case, I use google maps to find places that are generally tucked away enough that I don't have to worry about being stumbled upon by some hiker or forest ranger.

On Tuesday, the 3rd of October, Stefan showed up with his friend Patrick and we set off from my hostel for our first stop - La Pedriza. La Pedriza has been on my list of places to see for a while. I spent a whole year living in Spain, even drove around most of the country, but never got around to seeing it. Well, since we had a few days, we made a slight detour to a "campsite" nearby so we could get an early start on our hike the next morning. Okay, so we broke the first rule of wild camping - we camped in a public place. But, we made it work by getting there after dark, and leaving before the first joggers showed up. Spain has a lot of areas where there's really no place to hide, so sometimes you just gotta make do.

After hiking La Pedriza, with all of it's boulders and beautiful views, we rode back down on the mountain bikes with our friend Patrick following us in the van. We then drove to Guadalajara for lunch, and continued to the small mountain pueblo of Montanejos for another shot at the hot pools there. I had been there before during my trip around Spain with Preston, but I hadn't gone in because it just didn't seem worth it at the time... winter was only just coming to an end. Following our refreshing dip, and a nice dinner at a local restaurant, we decided not to stay at my tried and trusted camping spot there in the hills. Instead, we pushed on for a couple more hours toward our next destination: Morella. We ended up camping on a random mountain road up in the clouds which, yet again, turned out to be a rule breaker... we would wake up the next morning to the sound of the owner of the house just up around the bend driving down and stopping at our "campsite". Fortunately, he didn't seem to have much to say - probably saw the Swiss plates and put two and two together. In any case, I had chosen this place based on its remoteness (google maps is clutch), so chances are they don't get a lot of unwanted visitors hanging out on their premises.