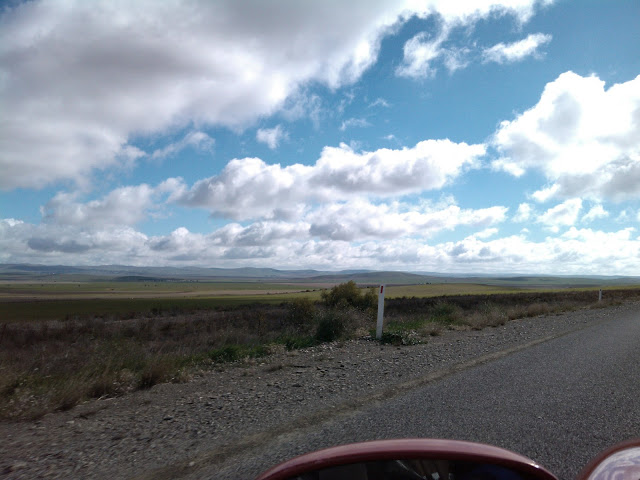 Today Ben picked me up at 10a and we began our two day road trip to Brisbane. 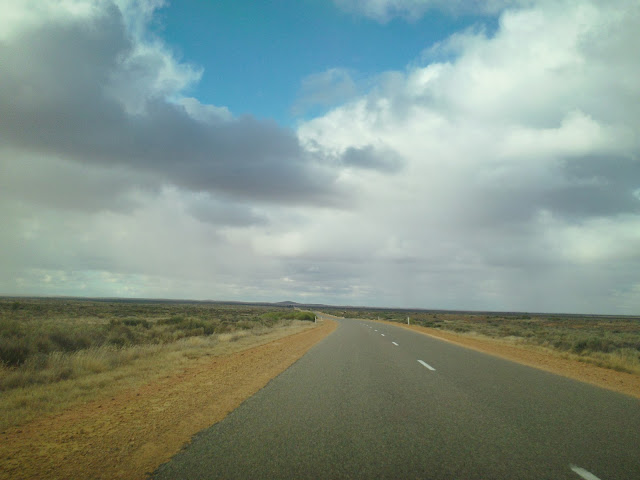 We drove up through Gawler and stopped in a small town for chips with chicken salt and a "mongrel" hotdog.

Then we went East through Broken Hill where we stopped for some Maccas. 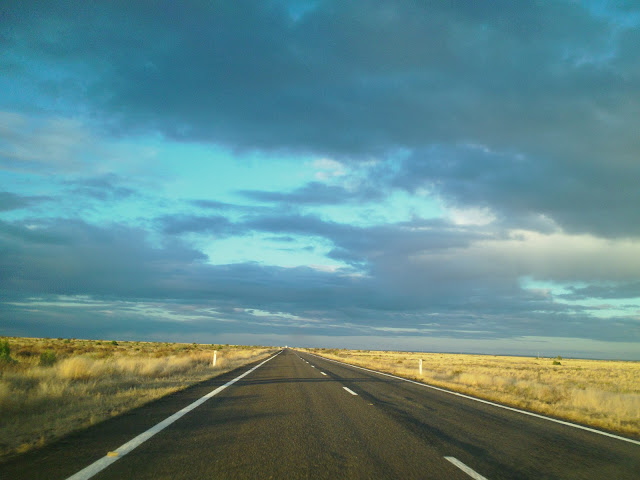 As we delved further into the bush animals began to show up. First Emus in the distance, then one ran across the road and later a fox did too. After a while it got dark so I took over driving for a bit... unfortunately it didn't last since we hit a goat... at 100kph. At first I just saw a line of baby goats walking out single file into the road so I swerved a bit only to slam into the adult which was following behind. The goat unexpectedly seemed to float as it flew upward in an aerobatic defiance of gravity and landed behind the car. The car was not in the best of shape after this - the front was smashed in a bit, the bonnet was scrunched up, the door wouldn't open and the right headlight was out. On top of everything it seemed we had a leak as well.
We called the emergency line for the police and waited. Eventually a guy came along, checked our situation then recommended a rest stop up the road in case nobody came. Another guy came soon after and gave us some drinks. This guy was in the military and heading up for a training. He told us how a gun Australia is heavily monitored, especially in the military - one gun is only allowed to be transported if guarded by a group. He also told us about his own experience with the suicidal wildlife in the area - a goat actually ran up next to his car and tried to run in front of him. Finally the police showed up and told us that the tow guy was out on the drink so we would probably be best camping out till morning.

Today the tow guy came at 3a and noted that the only leak was from the windscreen wiper fluid so he put on our spare and signed us off with the REA since Ben had the coverage. We then drove down the road 1km and slept at the rest stop. Later in the morning I slept out on a stone bench for a while but it was too cold so I went back in the car. Soon we were ready to leave so we started driving.. slowly - the dips in the road caused scraping on the front right wheel since the wheel well was shifted back. It would have taken hours to get to the next town but, fortunately, a guy named Heath came along with a trailer and loaded us up. 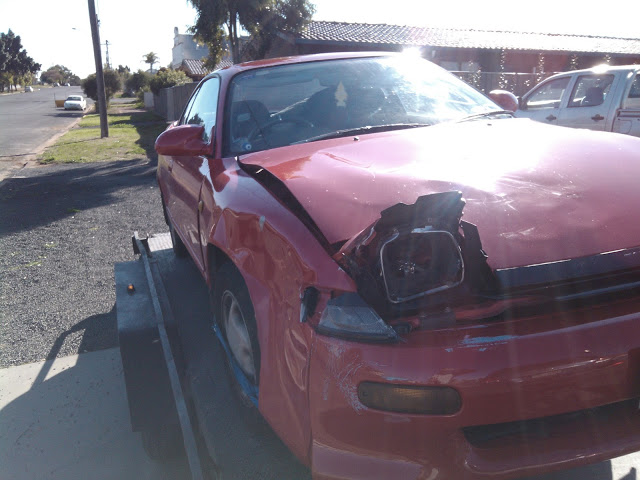 He gave us a couple drinks and brought us all the way to a town called Cobar where we loosened up the wheel well and went on our way.

Several hours and hundreds of kilometers later we stopped in a small town where we found accommodation at Hotel Tourist in Narrabri at $50 for the both of us - cheaper than many hostels! 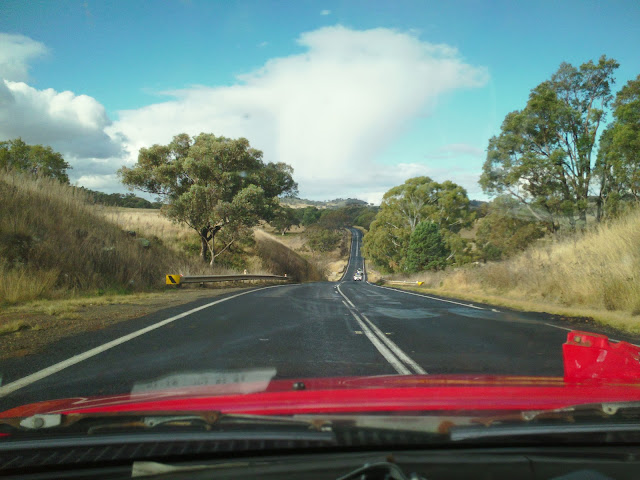 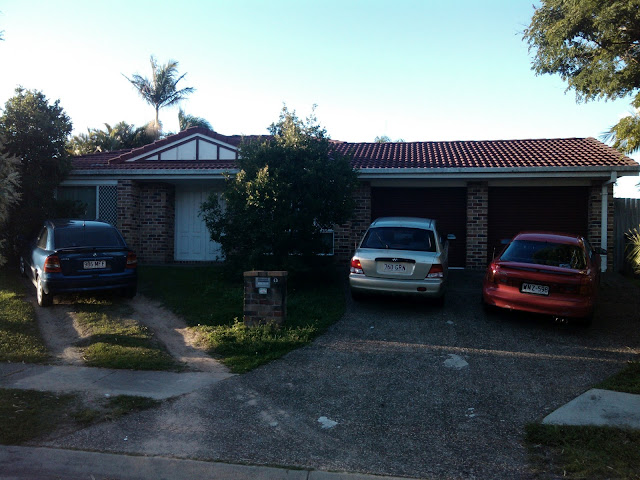 Next we got some fish n chips and had a couple drinks then caught a bus into the city. While on the bus we met a guy named Booboo (nickname) and he showed us to a place called "The Victory." It was there that we had a couple more drinks and made some money. The place had a $3000 balloon drop with everyone scrambling to pop balloons with $5 and $10 notes in them. 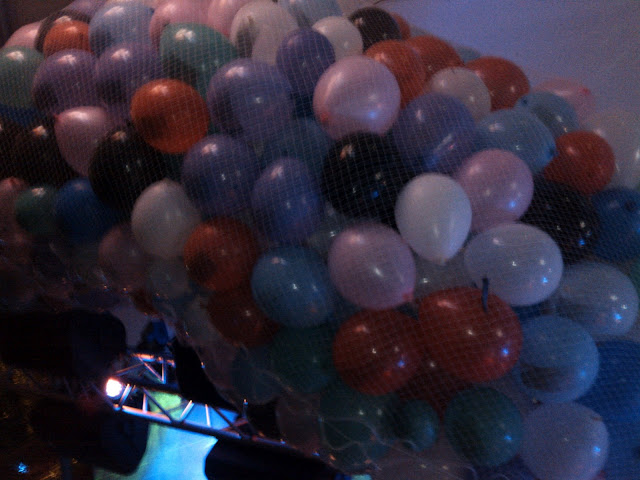 I noticed all the money falling to the floor so I got down and started collecting cash while everyone else popped the balloons. Soon it was over and I counted out a good $65 free money. A guy named Jack that we met had gone straight to the floor from the very start and found $95! After a while we went to a place called Pie Face on Queen Street Mall and Albert. Finally Ben and I decided to catch a taxi home so we waited on a bench by the road as a couple sneaked up five meters ahead of us and snatched the first taxi. When we finally did get a taxi Ben tried to haggle but I was in the front and didn't play it right - apparently you can bribe them to turn the meter off and they'll run red lights and speed to get you home for less!