Today we met with our travel agent, and fellow couchsurfer, Carolina at Tribal Travel. Most of the trips to Whitsundays were booked but she managed to find us one for about $95 which she reduced (couchsurfer discount) to $85. Next we hopped a bus to the docks then grabbed a boat over to Daydream Island, Hamilton Island followed by Whitehaven Beach on Whitsunday Island. There we spent almost two hours swimming in our sting suits and playing on the beach. After sighting a decent sized transparent white fish we ran up the beach a bit to check out some helicopters that were there for a wedding. 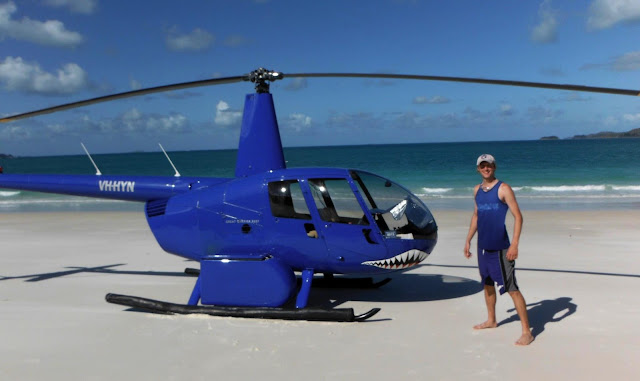 On the way I saw a dark figure in the water which turned out to be a full on Manta Ray! Our new friend Eric from Canada chased it with his camera then ran as it chased him. After it finished with Eric it chased me out of the water then swam away. 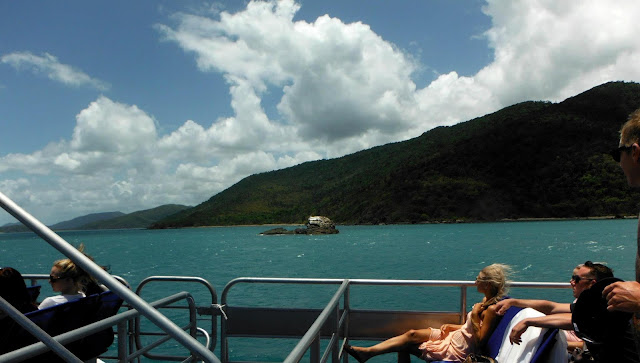 On the way back on the boat I caught up with an Aussie named Reece. Reece is from South of Brissy and got a real kick out of my Aussie slang repertoire  Back at the van we went to a local forest with Eric and set up camp. Giac and Robert then went to do some stuff in town while Eric and I had a couple drinks, played guitar and even sang a few songs that we could remember the lyrics to. Later in the night while we were all sleeping the police showed up and kicked us out. They gave us 15 minutes so we quickly threw my tent in the van and went on our way down the road looking for a rest stop. When we finally found one a guy told me that he had to put his tent up because of the ranger ten minutes ago so that I should probably try and hide mine. Just then the ranger showed up and made me put my tent away. That night Giac and I slept in the back while Robert slept sitting up in the front.