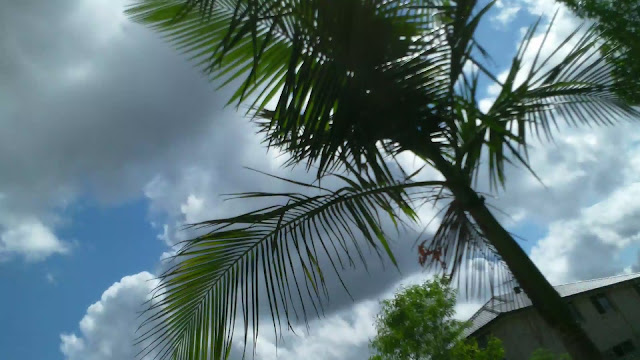 Today a lady tried to get me to go and dry up all my mopping as my shift was ending. I told her I could put some wet floor signs up but that didn't seem to appeal to her so I just left. I mopped under the shelves where nobody walks anyways... Later, on the way back to work, a truck backed out in front of me and then pulled over a bit further down the road behind a girl who was walking. As I passed her she started running and as I looked over she told me not to talk to her... so I just kept riding. Hard to say what was going on there but I'm guessing the guy in the truck was up to something and she was trying to avoid some sort of confrontation. At work I had another incident with the store people not sharing the cleaning closet - they took my mop, bucket and cleaning chemicals. I don't know why they're so territorial about that closet but it's really starting to bug me. They also blocked off my cleaning cage so I can't get to my equipment...

Today a couple of the ladies gave me a condescending lecture about the floors again. I had "wet floor" signs up but they were still concerned that some illiterate fool would slip and sue the store... I also got stared down by one of the deli ladies while I was buffering the floor. Finally, after I returned home, I got a call that the store people complained but weren't clear on the problem. First it was that the store was dirty, then it was that the floors weren't shiny enough, then it was that my mop and water were dirty... well, of course the water is dirty, I just finished mopping the floor with it! Doesn't help that they hid my cleaning chemicals... with all of the complaints and constantly derailing my work efforts it would seem that I am not quite welcome there.

Today I spoke with the manager in charge and she gave me a couple things to fix but nothing major. Apparently the floors were a bit spotty from the scrubber having issues yesterday and the stockers left some marks by the milk after I finished that area so none of it was actually my fault but all of it is my problem...

Today I didn't get any complaints and I met a very Aussie sheila in the bakery. She told me about some good hiking around Brisbane and a job at the meat works that looks specifically for backpacker and pays $30/hour... probably too late for me now though since they require a few months but, then again, I've heard that the meat works factories are very disgusting, depressing and full of gore so maybe it's best that I'm just now hearing about this one. After work I went home and bought some chicken pies from Jenny for $10. A bit steep on the price but a nice arrangement nonetheless.

For the last couple days I've been sleeping a lot and fortunately avoiding the rain on my way to and from work. Today I got back with just enough time to leave for the meeting but after brekky it just wasn't going to happen. Around noon I finally received my first major pay but it wasn't as expected. Apparently when Jeff told me $700/week for my new job he was including my other one as well so the new job only contributes $500/week... this will still be good, just not great.

Today is my birthday. I had an awesome brekky with three slices of ham, three eggs, cheese, toast and hash browns. Later I spoke with Jeff because he was short $50 on my pay. Apparently he forgot that I'm doing the extra job for a total $200/week for the evenings so he only paid me $150 for the first week of the fortnight. What I don't understand is that he says the morning shift is $500 more a week so he knows that $700 is $200 more than that. Anyways, we eventually sorted it out and he will send me the $50.

Today I got told to dry up a "puddle" by the checkouts... of course, as usual, it was just a bit damp by the edge but the safety patrol deemed it a risk and made me dry it with some towels. I wouldn't mind but its near the end of my shift when I'm just trying to finish up and its nothing that wouldn't dry in a few by itself anyways ...

All Photos
Posted by Travis at 4:56 PM