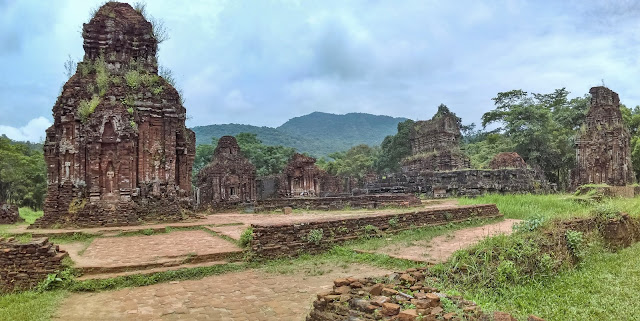 Mỹ Sơn (pronounced "Me Sun") is an abandoned group of temple buildings from about 400-1400 AD. On Friday, May 19th, I had my free egg rice breakfast that was included in my $5 hostel booking, and then started my ride over to Mỹ Sơn sanctuary. It was during this ride that I saw the most legitimate examples of bad driving that I've ever seen in my life. I had already witnessed some pretty interesting driving in the city - this shirt I bought says it all. 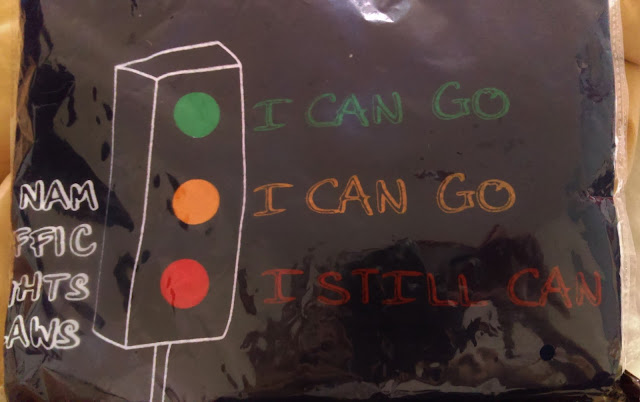 It turns out you can pretty much do whatever you want on the roads in Vietnam. For example, passing into oncoming traffic is routine here, and I can't even tell you how many times I saw people talking on their phones while riding. I even had a chat with Vinny the night before while he was giving me a tour on his scooter, and I couldn't help but notice that he wasn't even looking at the road half the time - even when we were entering an intersection... 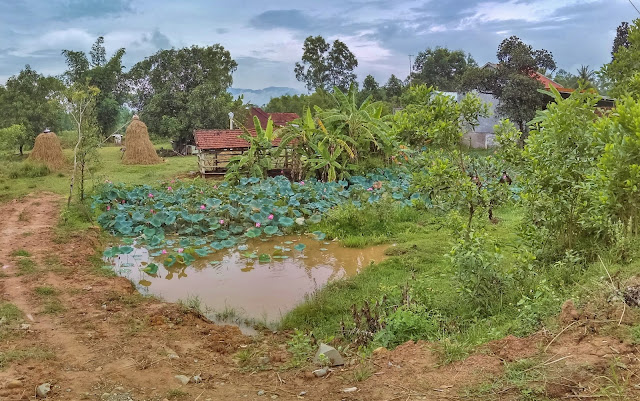 Anyway, I thought the temple ruins were interesting but, for me, the ride over was the best part. The rural areas are also really nice in general. The rugged roads and natural beauty of the countryside were really impressive to me. The undeveloped areas give a nice sense of balance between civilization and untamed wilderness. If I had my way, and I know many would disagree, but I would like to see the whole world preserved in such a natural, "uncivilized" state. At least to me, the trade off seems well worth it.

After another few hours ride back to my hotel in Da Nang, I decided to find something to eat. As I was walking around the neighborhood, using my broken Vietnamese to ask about places to eat, a random guy on a scooter rolled up and told me to get on. Now I know what you're thinking, sounds like a scene out of a horror movie, right? Well, I didn't feel like the guy was threatening in any way and, in any case, I was twice his size. Worst case scenario he takes me a few blocks further than expected and I force him to stop.

As we rounded the corner, we came to a stop at a dirty little garage. I wasn't sure what to make of the place until a lady came out with a plate. Turns out he had taken me to a neighborhood restaurant! This was technically what I was looking for, so I sat down and had a look at the strange egg she had brought out. I peaked into the opening on top and quickly realized what I was looking at... this was no ordinary egg... this was Balut. 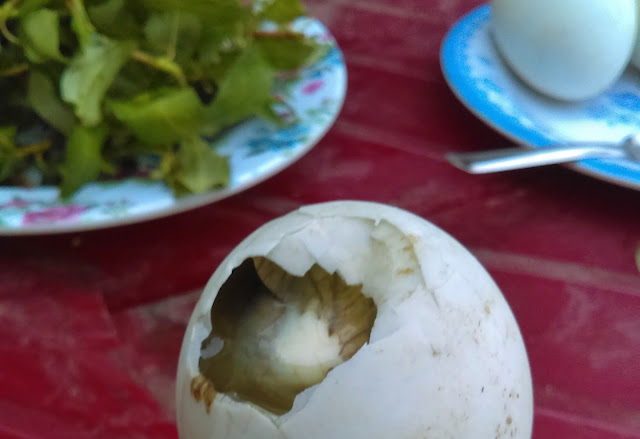 If you don't already know what Balut is; it's a boiled duck egg. The only thing is that this duck egg is fertilized... meaning that the bird inside is half-formed. I started peeling away the shell and eating the yoke (which was actually on the outside) when the guy put down his cigarette, took my egg and shoved his thumbs inside. I was then greeted with the lovely sight of internal organs, veins, beak, eyes and the beginnings of feathers. Still, I thought to myself, "how bad can it be?" 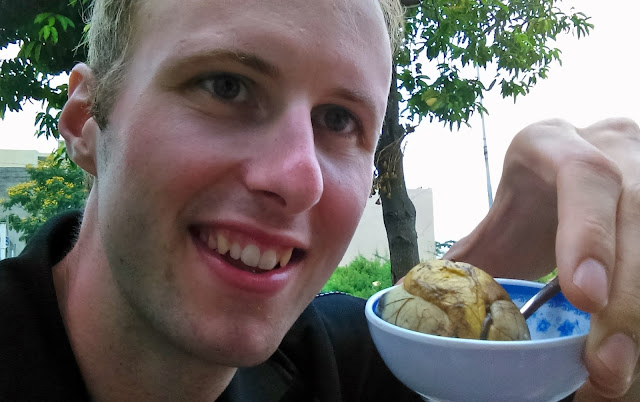 It's pretty bad. I've eaten a lot of weird stuff: Durian in Singapore, scorpions in Beijing, intestines as well as stinky tofu in Hong Kong, Haggis in Scotland, Kangaroo burger in London (imported from Australia of course), Possum in New Zealand, Dog Soup in South Korea, etc. But this... this was not an easy one to stomach. After eating most of one, along with lots of spicy greens, I had had enough... then they brought out another one. I didn't want to be rude, so I started eating the yoke on that one, but then realized I had a good excuse to stop - I was full. So, I did the appropriate gestures to show that I couldn't eat anymore - I had realized by this point that the Vietnamese that I had learned over the last month on Duolingo was pretty much incomprehensible to locals. I then got my host to finish it for me. Talk about dodging a bullet! Or, at least, to an extent. I'll never forget the texture of the innards, beak and eyes of that first egg that I actually had intended to fully consume.

I figured this was enough adventure for the day, but it seems my new friend had other plans. We hopped back on the scooter on our way to some random backwater street where we stopped at a bar. Before I had a chance to say anything (it was actually getting close to time for me to go meet my friends who I would be joining for a wedding the following day), he ordered the strangest drinks for us. I had a go at it - it was some kind of coffee liquor. Not my favorite. Then, as I had been dreading since having seen the drinks, we got back on the bike. Mind you - we had no helmets. My driver insisted that he would be careful (at least that's the message I got), so we slowly began our short trip back to his "restaurant". Slowly at first, but then he got it up to a reasonably uncomfortable speed as he swerved drunkenly along the road. Thankfully, we made it back safely. I walked the rest of the way to my hotel grateful that I wouldn't be later be telling the story of some horrible accident experienced on this, what I would call, an otherwise worthwhile, unique and exciting adventure. 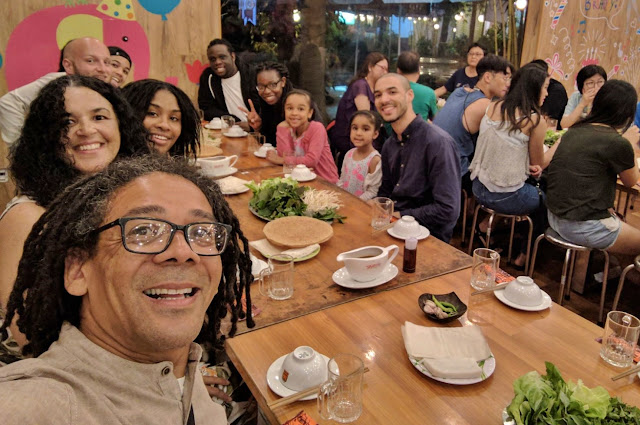 Later that evening, I met up with the wedding party at a popular local restaurant scene called Tran Food. It was kind of cool because they gave us all of the stuff for making spring rolls in which we were free to put whatever we wanted - a welcome change from eating duck fetus surprise!