Today I woke up, got ready and hit the road to Hastings. About 130km later I arrived and started sussing out fruit picking work. Unfortunately that doesn't start for a couple weeks so I took a hint from some fellas on the road and stopped in at a local public house for some more info. When I entered I took off my bag and noticed my arm was in serious pain - it seemed I had pulled a muscle. After helping me with some picking info, one of the girls who ran the place for her parents gave me some water and had me sit down in the rest area while they made me some soup and homemade bread - on the house! After downing homemade goodness that brought me back to my childhood, we had a talk about some of the local spots for picking and camping and they sent me on my way. I stopped in at some spots along the way but found that the picking really just wasn't happening yet so I went for the camping area at Cape Kidnappers.

As nice as that spot was it just wasn't suitable for me and my bike so I continued on my way to Taupo as I had originally planned. On the way I took in some of the most beautiful scenery which made me wish I had a helmet camera and, at one point, I pulled off and checked out some really nice waterfalls. 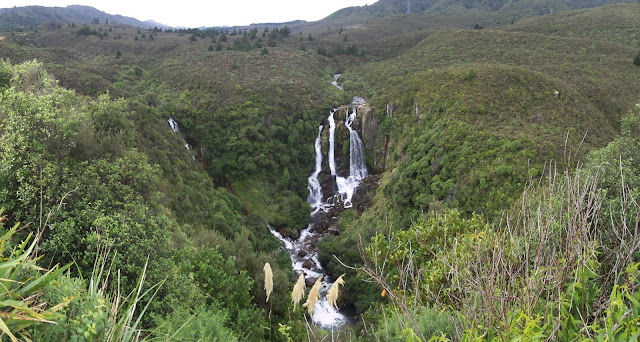 About 160km from Hastings I arrived at the thermal spas in Taupo and soaked for a while. The gates were closing in a half hour but so many cars and people were there that I figured I'd be fine, but soon I realized that everyone had left and made my way up to my bike. Unfortunately I had dropped my glasses so I went back looking but just couldn't find them. I do have a spare pair so it's not so bad. Back at the bike I found that the gates were closed but luckily my bike fit down the pedestrian passage out of the park. Back at the campsite from last week (Reid's Farm) I set up my tent in the same spot and started cooking tea. While I was boiling up the noodles the rain started pouring down and suddenly the tarp let up and a small spout of water poured into my burner, soaking the flint starter.