Today I checked out of my room then waited for French CSers Camille and Guillaume to pick me up for our ride-share South. Later in the afternoon, after they sorted out fines and other pre-trip things, we were off. Our first stop was Warehouse Extra where I bought a camping stove and other gear. We then drove to Taupo where we found a beautiful spot on the river called Reid's Farm where we camped out for the night. That night I caught a prawn aka crayfish while washing my dishes in the river. 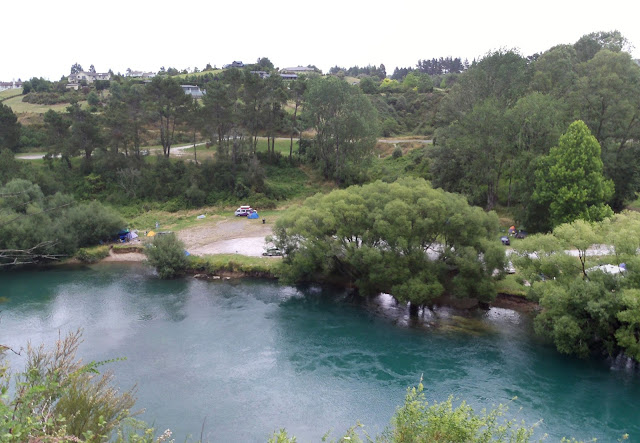 Today after brekky we packed up and went to the thermal spas. It was an amazing place with boiling hot water meeting the cold water of the river. After hanging out in the super hot water of the springs for a while I did a "polar plunge" into the river. After the spas we hiked to Huka Falls then went to Countdown (Woolworths) for food. We then took our food and ate at a bench overlooking Lake Taupo.

Finally, we drove to Palmerston North where I stayed at the Peppertree Hostel while the others continued on to Wellington. Upon arrival at the hostel I was happy to find that it was the kind of hostel that takes people well into the night. Although, if I had arrived yesterday I wouldn't have been so lucky due to the large group of American backpackers that had checked in then.

All Photos
Posted by Travis at 9:13 PM