Today I went to Bondi Beach and did some body surfing. When I got there I found a boogie board in the bin and gave it a go. Unfortunately it was total junk and practically useless so I just body surfed and was able to catch some pretty decent waves.

After a couple hours I decided I was burnt enough and headed back to Woolloomooloo to get ready for dinner at Bethany's. Up in Eastwood I found her place and we all sat down for a delicious bacon pasta dish with veggies followed by fruit and ice cream for desert - a pretty awesome meal, especially if you consider my recent diet of rice and beans! After tea we talked a bit more about cultural and political differences between Australia and America and before long it was time to go and catch the train. 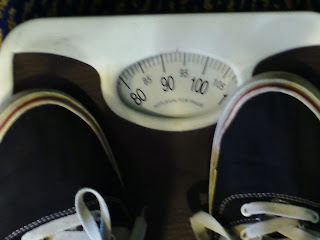 Today I hopped on a train to go meet up with a truckie named Tank, a friend of my Robbie's. Tank was passing through Sydney on his way to Geelong and Robbie convinced him to give me a lift down. After arriving in Glenfield I went on over to the bus area to catch my bus. I realized too little too late that my bus had arrived on the opposite side of the road. I ran over and just as I was at the door the driver hit the gas (or petrol as they call it here) and left me standing there with all my 30 kilos (65 pounds) of baggage hanging off of me.

Just my luck none of the other buses went to my stop and I ended up walking a ways. After a mile in the hot Australian sun with all my stuff I arrived at the point on my GPS where Uncle Leo's truck stop was supposed to be (according to Google maps). Turns out I was quite a ways off actually and after nervously asking the Pizza Hut staff there where to go I found that nobody had even heard of Uncle Leo's. Although, one of the girls did know a caltex truck stop and she felt pretty certain it was Uncle Leo's so she rang the taxi service because, as it turns out, I was nowhere near it. I wanted to walk it but as it turns out I was a good 20 km (12 miles) out and would have never made it on foot. Before leaving I called Robbie and fortunately Tank was a bit delayed and I had a couple hours to work with. When Tank arrived we hopped in his truck and headed out. After a few hours we arrived at a truck stop and ate chico rolls and dim sims (spring roll and dim sum) then went back to the truck to sleep.
Posted by Travis at 9:19 AM